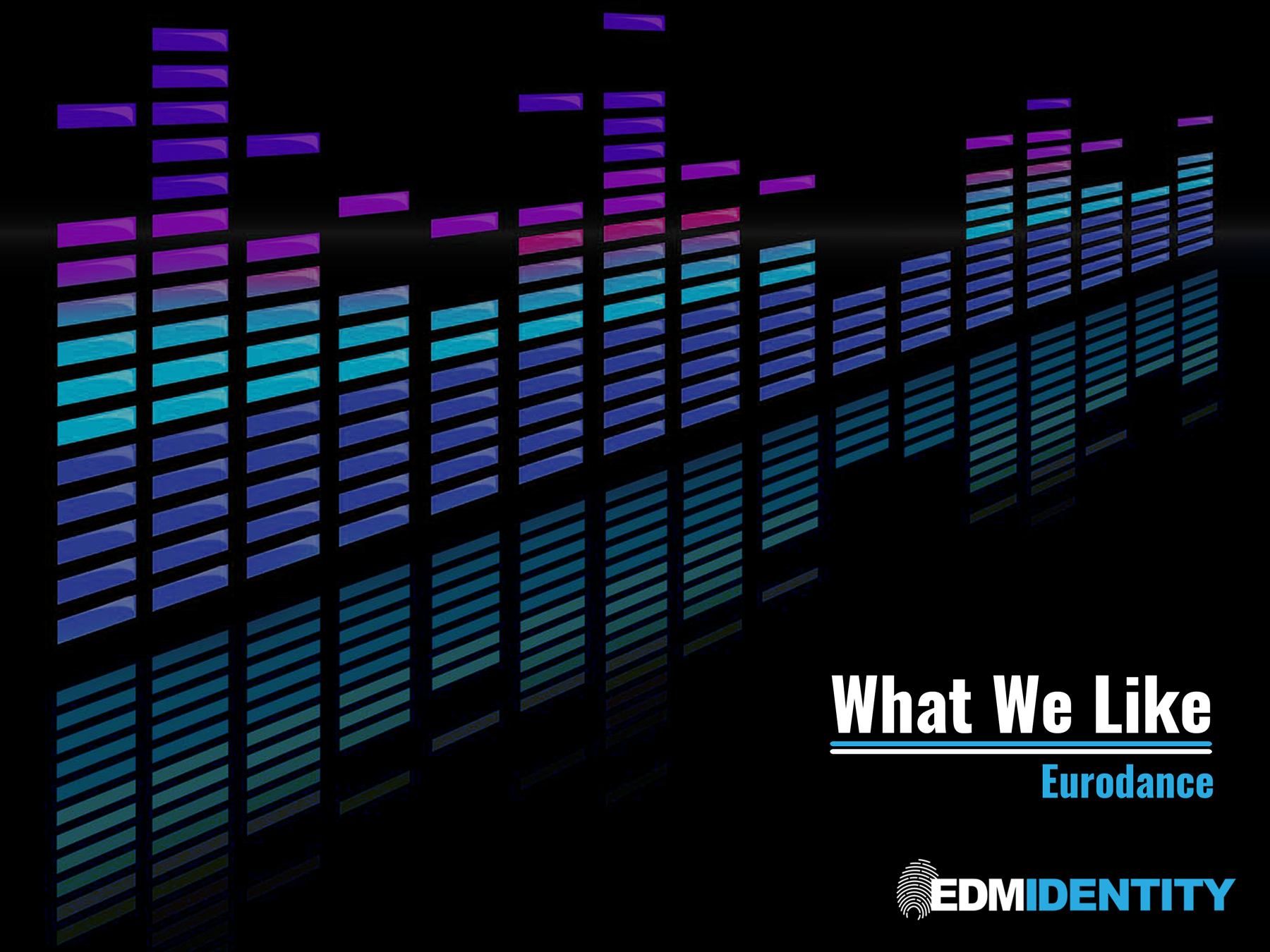 This month’s edition of What We Like is focused on Eurodance!

The What We Like series focuses on a sole genre that a contributor to the team is passionate about. Our intention is to not just to provide some music for you to listen to, but to guide you on your journey in discovering new genres. Join us as we explore the sounds found in the genre Eurodance!

Hello readers, and welcome to another edition of What We Like. This month we’re discussing a genre that infected the world with its melodic hooks and synthesizer riffs: Eurodance!

So what is Eurodance?

Truly beginning in the late 80’s, the genre blossomed in the 90’s and peaked in popularity in the middle of that decade. Originally found in Germany and other centrally located European countries, it quickly spread to the rest of Europe while also finding a home in pockets of Asia and North America.

Waning in popularity toward the turn of the century, true EuroDance found itself battling against other genres that had gained momentum over the years like Trance, House, and Nu-Disco. Here in the United States, it always seemed to take a backseat to other genres, and even American Eurodance Artists never saw much success Stateside.

Songs in the Eurodance genre traditionally consist of a synthesizer riff that features a solo vocalist or duet of a vocalist and rapper, all tied to together with a strong beat. Stemming from the NRG scene in Europe, the tracks you’ll hear in the genre are melody-driven and regularly bring positive, upbeat vibes along the way. While you might think Eurodance is Pop, the difference can be found in the key in which the music is written, as Pop tends to be in the major keys while Eurodance finds its way in minor keys.

When you think of artists that really took the Eurodance genre and made it their own, you can’t help but mention notable names like Technotronic, Cascada, DJ Sammy, 2 Unlimited, Ace of Base, Günther, and Basshunter. It wasn’t just in the club scene where you could find Eurodance, either, as Captain Jack was featured on many editions of Dance Dance Revolution and Crazy Frog’s somewhat annoying sound found its way to cell phones worldwide.

So what did early Eurodance sound like? Let’s turn back the clock to 1989!

You can’t really discuss Eurodance without talking about the two tracks that truly helped define the genre in the late 80’s. Black Box’s “Ride On Time” and Technotronic’s “Pump Up The Jam” were definitely the ones who set the tone of the early days of the genre. Between the two, “Pump Up The Jam” definitely received the most play from our perspective and found itself played out at raves and sporting events to this day. Take a listen to it below!

In the early 90’s, Eurodance truly began to take its hold with artists like 2 Unlimited, Snap!, and Haddaway.

Sure, there were other artists that helped expand that early Eurodance sound like Rednex, Real McCoy, and even US-based artist Scatman John, but they had a smaller number of tunes that left a lasting impression.

Of all the Eurodance artists from the early scene, I always found myself getting pumped up the most by tracks from 2 Unlimited. Absolutely dominating the scene with tracks like “Get Ready For This” and “Twilight Zone”, their music is on many of the tapes and early CDs I owned. Yes, you read that right, tapes.

Snap!’s hit tune “Rhythm is a Dancer” is also one of my favorite tunes from the early era.

Featuring upbeat vocals and an infectious beat that will literally get any dancefloor moving, I heard Snap!‘s “Rhythm Is A Dancer” get played out everywhere from Sea World to clubs, and everywhere in between. It is also a great example of how this genre blended the duet of a vocalist with a rapper to create a tune that was absolutely massive.

It would also be insane to not mention Haddaway’s hit tune “What Is Love” in the discussion.

That track transcended the music scene and made its way into pop culture most famously through A Night At The Roxbury. It was one of the most iconic skits in Saturday Night Live history and even helped propel it to have its own standalone movie.

The mid to late 90’s brought with it even more amazing Eurodance tunes.

Now that the foundation of the genre had been laid out, it was time for the boom in popularity to take over as more artists joined in on the fun. This era of Eurodance can really be marked with the arrival of Ace of Base, Aqua, and Amber, and was closed out by the notorious Eiffel 65.

While I could point to Aqua’s “Barbie Girl” or Ace of Base’s “Beautiful Life” always sticks out to me as one of the defining songs of the Eurodance genre. It brings that positive attitude and beat that makes you just want to dance in pure bliss.

While those artists made names for themselves, none reached greater heights than  Alice Deejay and the Vengaboys.

Between those two acts alone you can find a slew of hits that dominated the airwaves in Europe and continue to get played out to this day at events and festivals around the globe. In fact, for many people, Alice Deejay may have been one of the first electronic-based artists that they heard through their notable tune “Better Off Alone”. Still receiving massive play today and loads of remixes that modernized the track, who would have guessed that two of the minds behind Dash Berlin were also a part of Alice Deejay back in the day!

The Vengaboys definitely brought the party vibes that Eurodance was renowned for with classic tunes like “We Like To Party” and “Boom, Boom, Boom”.

Of course “We Like To Party” transcended beyond the club scene due to its fun lyrics and beat that could put a smile on anyone’s face. The track was featured everywhere, even landing a spot in Six Flags commercials that became instantly recognized for the dancing bus driver who sported some serious moves.

The Eurodance genre continued to party hard during the turn of the millennium but began to slow down toward the end of the decade.

This is the era in which many songs that you have probably heard in some capacity or another come through in full force. Artists like ATC, DJ Sammy, and Günther made their mark on listeners with both their original tunes and takes on classic tracks.

Spanish artist DJ Sammy’s hit tune “Heaven” dropped in 2001 and made an immediate impact on the dance music scene, reaching #8 on the Billboard Top100 and even reaching gold status with the RIAA. It’s one of the most memorable songs to come out in the genre. Check it out!

This era of Eurodance also marked releases from Cascada and Basshunter that helped solidify a love for the genre by many.

Hailing from Sweden, Basshunter’s unique style wasn’t specifically Eurodance but heavily relied on the same structure found in the genre. Bringing his sound to the world with tracks like “Boten Anna”, which was re-done as “Now You’re Gone”, and “All I Ever Wanted”, he quickly became a name known by many.

Cascada truly became the Queen of Eurodance and also one of the genre’s most well-known acts.

Consisting of DJ Manian and DJ Yanou, it’s singer Natalie Horler whose vocals made Cascada the powerhouse in Eurodance. Since 2004 Cascada has put out a consistent stream of hits ranging from “Everytime We Touch” to “Evacuate The Dancefloor”, the latter marking her deviation from the Eurodance sound to feature more of a pop influence.

So where does Eurodance stand today?

Well, for the most part, many of the artists from the early days of the genre have hung up the headphones. As we touched on earlier, the turn of the millennium brought with it a surge in popularity for other genres in the electronic scene in Europe which led the Eurodance genre to become more pop-infused than ever before.

So while the genre isn’t truly dead and the influence of its sound can be heard in many other genres of electronic music, it is most certainly on life support for the time being. While you might be able to hear tracks from the genre thrown into a classic mix or a throwback show, you’re more likely to hear them get played out in a stadium full of roaring fans.

That being said, DI.FM has continued to keep the dream of Eurodance alive with their genre-specific station. Tune in to the upbeat vibes that have been infecting the world since 1989 and get the party started!

At the end of the day, Eurodance has left a lasting impact on the music scene and continues to do so to this day.

While it isn’t a traditional rave sound that has trekked on to this day, the Eurodance sound helped shape a generation of music listeners and even ushered many to find a love for electronic music. As I mentioned earlier, many of the tracks that are classified as Eurodance were some of the first electronic tunes I experienced and definitely led me to explore the world of electronic dance music over time.

So whether you’re an avid Eurodance lover or someone who just happened to hear some of these tracks on a show, at a sporting event, or even in a commercial, there is no doubt that this music has found its way to a speaker near you.