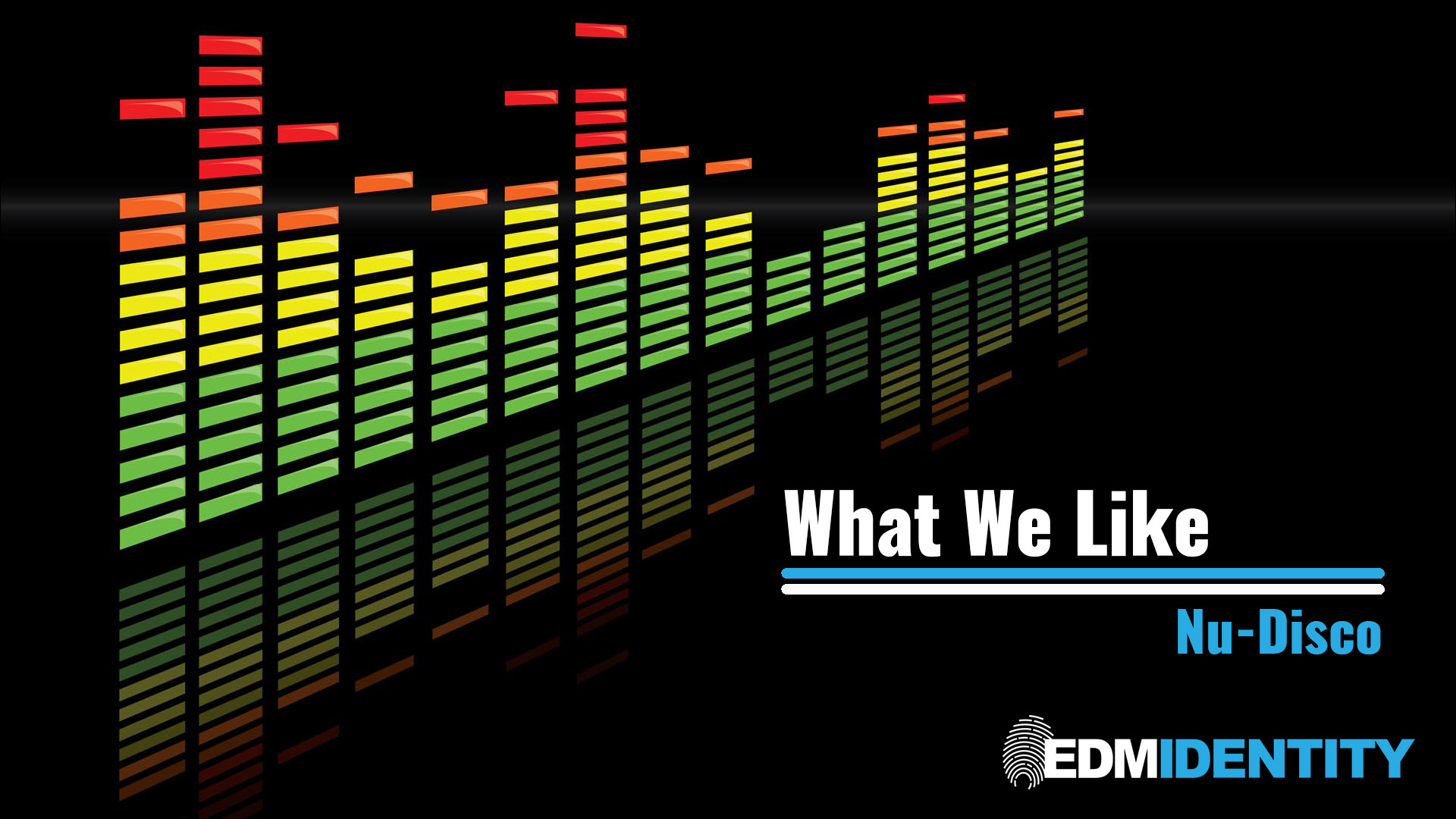 What We Like is a new series that features genres we like in the electronic music scene. This month’s edition is focused on Nu-Disco!

What We Like series focuses on a sole genre that a contributor to the team is passionate about. Each month, that contributor will dive deep into the genre they care most about to bring you some history, information, and of course some music too. Our intention is to not just to provide some music for you to listen to, but to guide you on your journey in discovering new music or help you develop a deeper connection to genres you already love. This month’s edition of What We Like is focused on Nu-Disco!

I can say with absolute honesty that I don’t know a single person who dislikes Nu-Disco. In fact, my friend who introduced me to the genre mainly listens to Experimental music and Noise Punk.

In 1979, radio DJ Steve Dahl blew up a stack of Disco records on the field of the Chicago White Sox stadium as a publicity stunt. The event would take on the moniker “the night Disco died.”  Unfortunately for Dahl, not only did this stunt damage the playing field enough that the Sox had to forfeit their next game in the series, 38 years later the disco sound and everything it went on to influence still has a massive place in the world’s music landscape.

Drawing its sound from North American Disco, Italo-Disco, and House elements, Nu-Disco is an upbeat and feel good style of modern dance music that often bridges the gap between the underground and mainstream dance music scene.  So let me guide you through some of my favorite cuts from the genre, and you’ll see just how much there is to love.

First, let’s dive deeper and explore a few tracks and perhaps an album to really get a feel for the genre.

Classixx – All You’re Waiting For

I’ll spare you all the “starting with the classics” pun I was brewing for this article, but the producer/DJ duo Classixx has been a staple of the Nu-Disco sound for a while now.  Their song “All You’re Waiting For” from the Hanging Gardens album is a perfect sampling of the genre.  It’s melodic with a plethora of retro style synth elements.  It’s lyrically focused, although the lyrics in this song are on the vague side compared to other Nu-disco tracks.  The percussion in this track is of particular importance in really understanding the genre.  The main beat is simpler than most house music, with more similarities to classic Disco, and the drum fills are comprised of latin percussion sounds and the ever present synthetic “disco toms” in addition to the standard claps, snares, and cymbals in most dance music.

The Knocks are just a great band.  The Duo performs great as both DJs and a live act, and they’ve managed to bridge the gap between underground dance music with the mainstream of pop, like Amelia Airhorn, their recent collaborative project with Future-Funk legend Skylar Spence, and collabs with Fetty Wap and Wyclef Jean.

“Comfortable” shows off the funkier side of Nu-Disco.  The synthesized slap-bass line provides nearly as much melody to the track as the excellent vocals provided by X Ambassadors, and the brooding chorus sections lead into one of the catchiest hooks I’ve ever heard.

Jamiroquai are absolute legends in the scene.  Formed in 1992 and originally making Acid Jazz, the band began to shift towards a retro style heavily influenced by Funk and Disco, thus becoming one of the progenitors of our genre of the month.  Just this past year, the band came back from a seven-year pause to release the new album Automaton.

“Cloud 9” is one of my favorite cuts from the new album, it’s got fantastic synth and guitar work, Jay Kay’s always wonderful vocals, and it showcases the atmospheric and low key side of the genre.  Although he hasn’t been a member of the band since 2002, the world sadly lost a legend this past April in the band’s original keyboardist and songwriter, Toby Smith.  Thankfully, the rest of the band still carries on his legacy by performing and putting out new music to this day.

Technically this track would actually fall under the French House/Disco House genre, but I’m including “Music Sounds Better with You” because of its influence on the genre.  Released in 1998 (for context, the term Nu-Disco was first used in print to describe a type of music around 2002) as a Daft Punk side project, this is one of the most feel good, and frankly timeless dance tracks of them all.  Although it has many similarities to modern Nu-Disco, it also illustrates some of the key differences between this month’s genre and that of the disco house that inspired it.

The main thing is that the track is heavily sample based, compared to the usually programmed or live original instrumentation that Nu-Disco relies on.  The other key difference is in the song structure; Nu-Disco will usually have the typical song structure of a pop song, with verses, a chorus, and various breakdowns, whereas Disco House generally has a more constant and unvaried character throughout.

This is the album that brought me from appreciating Nu-Disco to absolutely loving the genre.  I first heard the single “I Look to You” off Illumination soon after the album was released in 2010, and I was absolutely hooked.  The brainchild of producer Benjamin Plant, Miami Horror crosses the bridge between Nu-Disco proper and the very similar Australian Indie Dance Scene  Since then this album has remained on the very short list of electronic albums I make a point of sitting down and listening to the whole way through every so often, and still do seven years on from first hearing it.

From dance floor fillers like “I Look to You” and “Summer Sun” to ethereal journeys like “Moon Theory” and “Echoplex” to songs that just force a smile on your face like “Holidays” and “imagination”,  I really can’t recommend this album enough, and for that matter the rest of Miami Horror’s Discography as well.

Watching Nu-Disco performed live is an experience all it\s own.

Because the instrumentation is closer to your traditional rock or funk band than most other dance genres, live acts like The Knocks or Chromeo can add a whole new level of stage presence and energy that might be missing in a DJ set. Bands can also take advantage of the possibilities for crowd interaction and improvisation, all leading to some of the most fun sets you’ll ever see at a show or festival.

Satin Jackets is probably my favorite of the mysterious masked DJ’s.  Although the band members of the production team are clearly laid out as Tim Bernhardt and Den Ishu, you never really know who’s under the signature polygonal mask and sun visor when you see a DJ set.

This set showcases the chill side of the genre, and the tracks feature great elements like smokey, soulful vocals, winding synth arpeggios, and disco influenced guitar licks.  This may not be a super club ready set, but it’s a great example of the potential of Nu-Disco to be great after hours music in addition to its usual party vibes.

I wanted to Include this recording of Chromeo performing live at Primavera Festival to make a point about dance music and live performances.  I think Chromeo are one of the bands that prove you can create the same kind of spectacle with a live band on stage than you can with massive video screens behind a DJ when performing a festival slot.  This set is is another example of the higher energy and funkier side of the genre, featuring Chromeo’s signature sound, and their chrome plated instruments that really do add character to their live performances.

I recently played a DJ set of all Nu-Disco on a friend of mine’s internet radio station.  Every track in this mix was released sometime in the past year, and most of them in the past couple of months.  My goal with this mix was to showcases that wide variety of styles within the Nu-Disco genre, and of course to try and craft a set that’s an interesting listen.

As I sincerely hope you’ve heard by now, Nu-Disco has an undeniable appeal.

Whether you’re catching a headlining band at a festival, seeing a groovy DJ set, or just jamming out at home, this music is very easy to love. If this has been your introduction to the genre, first of all, you’re welcome, and I hope you get to catch some of these artists live in the near future!