While we daydream about the quantumVALLEY stage at EDC Las Vegas this year, let’s rewind time and soak in the visual magic.

Throughout the years, trance has played a pivotal role in shaping the dynamic character of EDC Las Vegas. In the early days of 2011 and 2012, the trance family could catch acts like Armin van Buuren, Above & Beyond, Cosmic Gate, and Markus Schulz speckled all over the grounds, serving up the beats that make us swoon. But between the years 2013 – 2015, there seemed to be a lack of trance presence, and so, the community raised their voices in concern. In true fashion, Insomniac listened and acted fast with the unveiling of Dreamstate.

First, the inaugural Dreamstate SoCal event at the NOS Events Center arrived. Marketed as your trance destination, it served up sci-fi aviation vibes – but what would that mean for trance at EDC Las Vegas? After an experience the trance family will never forget Dreamstate became a host for the circuitGROUNDS stage for a breathtaking Sunday takeover in 2016. This was only just the beginning and naturally, the trance family wanted more, and so, in 2017, a brand new stage would materialize called quantumVALLEY.

Related: Check out our quantumVALLEY playlist ahead of EDC Las Vegas 2022!

Fast forward to the present day and quantumVALLEY has become a spectacular meeting place for headliners (that’s you) looking to get swept into the stars via celestial melodies, high octane basslines, and lyrical masterpieces that pull on the heartstrings. Aside from the music, this stage has visually morphed throughout the years, forever blowing the minds of music lovers as they enter the trance utopia.

Now that it’s almost time to step back onto the sacred grounds of quantumVALLEY for its fifth year running, let’s tickle the senses by exploring designs from years past as we look forward to what’s in store at this year’s edition of EDC Las Vegas.

For the first time in EDC Las Vegas history, trance would finally have its very own home at the festival. In 2017, you could catch iconic artists such as PureNRG, Paul Oakenfold, and Simon Patterson while getting your brain rattled by dazzling lasers that refused to quit, futuristic costumed performers, and slim LED paneling with eye-popping geometric configurations. One of the most important aspects of any stage is the sound design and while tucked in a covered plot alongside the massive kineticFIELD mainstage, the immersive audio environment allowed attendees to feel like they were in their own little world.

For Dreamstate’s second year at EDC Las Vegas, quantumVALLEY would move away from the tent that trapped tons of heat and instead allowed headliners to bask under the glow of the electric sky while grooving to artists like ALPHA 9, Grum, and OMAIR. While still in approximately the same area alongside Kinetic Field, quantumVALLEY claimed the stereoBLOOM stage as its new neighbor.

This structure was massive, featuring lighting towers that made you feel like you were hanging out inside a gutted industrial complex. Between the moving heads that were spread throughout the entire structure and the repeating-pattern screen panels, onlookers were filled with an extreme sense of euphoria while they danced ’til dawn.

One of the biggest changes for quantumVALLEY in 2019 was its location. For that year’s edition of EDC Las Vegas, trance family members would unite on the other side of the Las Vegas Motor Speedway, tucked between the electric circuitGROUNDS and neonGARDEN stages. Taking a page out of circuitGROUNDS’ prior design in years past, trance revelers were treated to the “megastructure,” lighting towers that swept overhead in an arch.

Not only did this give a refreshed experience for headliners but even more space for them to groove out to the beats. With no lack in the visual spectacle department, the portal to another dimension drew eyes to brilliant music makers like Craig Connelly, Mark Sixma, and Bryan Kearney. There was even a splashing of squiggly LED strips that made for quite the psychedelic experience.

After taking a year off due to the pandemic, EDC Las Vegas returned in 2021 and quantumVALLEY was once again an integral piece of the puzzle with a stage design that emerged sexier than ever. Sure, the megastructure was toned down a bit when compared to its 2019 look, but all that did was draw your gaze to the galactic excellence behind the DJ booth. The screens took on a futuristic shape, pointing toward what looked like a planet surrounded by a solitary ring. These elements came to life as the crowd was abducted by the ethereal rhythm of the night, served up by the industry elite including BT, Paul van Dyk, and Ruben de Ronde.

With the past in the past, we now look to the future. Do you have any guesses as to what the quantumVALLEY stage design will be this year? Sound off in the comment section! 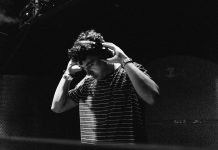