EDC Orlando 2016 is quickly approaching, Insomniac has officially released the stage-by-stage lineup. Once again three stages will be making their return this year: kineticFIELD, circuitGROUNDS, and neonGARDEN.

EDC Orlando 2016 will be boasting of some big names performing at kineticFIELD include Above & Beyond, Axwell, Baggi, Bixel Boys, Borgeous, The Chainsmokers, Chocolate Puma, CID, Dash Berlin, Don Diablo, Ephwurd, Hardwell, Jauz, Morgan Page, Porter Robinson (DJ Set), Throttle, W&W, and Yellow Claw; it will be interesting to see if they bring a smaller version of this year’s kineticFIELD stage from EDCLV like they have in previous years. Only time will tell on this one I guess. Apart from all of the big name DJs playing this stage, the Discovery Project will also be gracing this stage. Now it is unsure which day this will take place, but it will be amazing to see what upcoming DJs have made the cut.

Last year, Insomniac had brought a smaller version of the superstructure to circuitGROUNDS last year. It will be interesting to see if they will be bringing a smaller version of the 360 degree experience they had at Las Vegas this year. Artists performing at this stage will include 12th Planet, Alison Wonderland, Bassnectar, Bonnie X Clyde, Boombox Cartel, Brillz, Chris Lake, Friction, Kasra B2B Mefjus, KAYZO, Keys N Krates, MC Dino, Midnight Tyrannosaurus, Nero (LIVE), NGHTMRE, Rabbit in the Moon (LIVE), RL Grime, Spag Heddy, Tokimonsta, and Valentino Khan. I’m very interested to see what Insomniac will do for circuitGROUNDS especially with the Bassrush Experience taking place at this stage. It hasn’t been mentioned which day Bassrush will take over, only time will tell. Also it is very heartwarming that Insomniac has decided to do a Bigg Makk Tribute Set aka Shake’N Bass. Big Makk was very big locally here in Orlando and Tampa, so I’m very glad that Insomniac is doing that Tribute Set for him, it is very much appreciated.

NeonGARDEN was always a jewel in the rough, with a very zen vibe coming from its speakers, artists performing here will include Adam Scott, Bryan Kearney, Camelphat, Cocodrills, Cosmic Gate, Ferry Corsten Presents Gouryella, Heatbeat, Jamie Jones, Julia Govor, Mark Knight B2B Chus & Ceballos, Markus Schulz, Nicole Moudaber, Simon Patterson, Sonny Fodera, Standerwick, and Vini Vici. I’m wondering if the Buddha will be returning yet again to this stage. I love seeing him show his presence the last two years. Now one thing I’m excited to see that Insomniac is bringing this year is Dreamstate Presents, which will be taking over this stage. However it has not been decided which day it will take place. 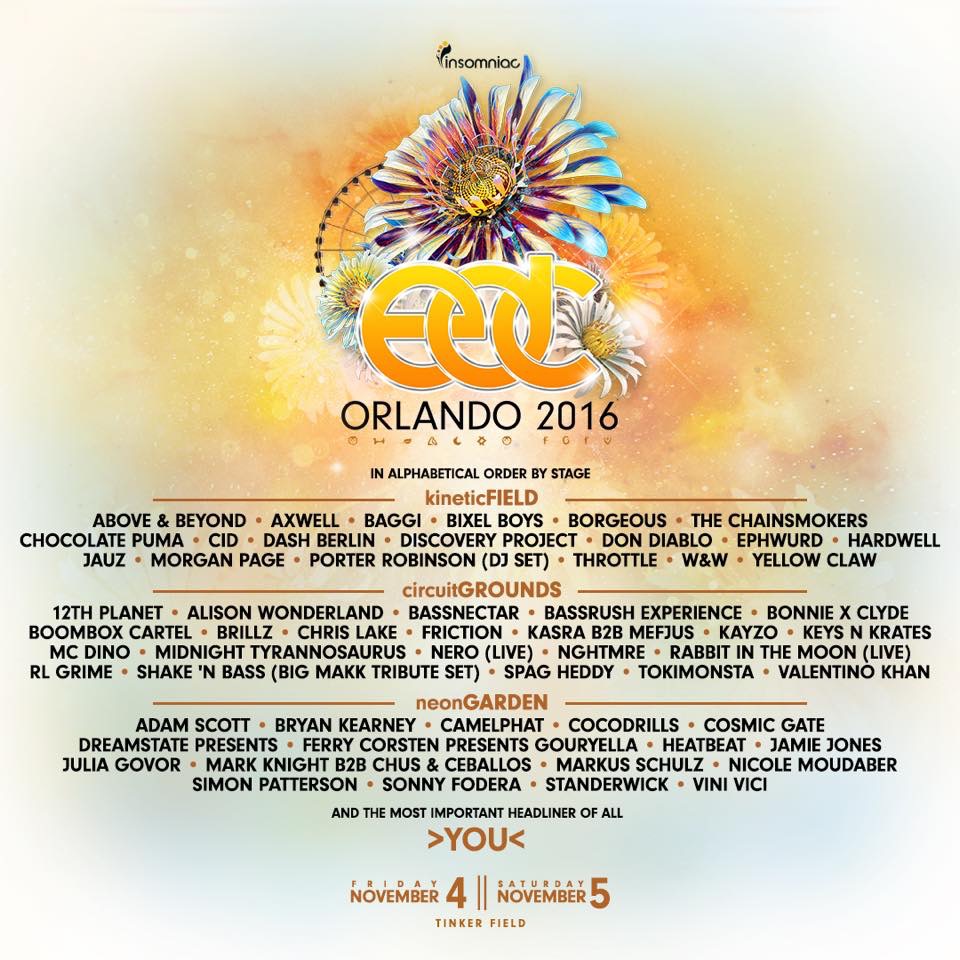 This year at EDC Las Vegas, Insomniac was trying to change the game around by taking the focus off of the MainStage area aka kineticFIELD. It will be interesting to see how they make this possible with EDC Orlando since it is a smaller and personable venue. I’m definitely excited to see what this year will bring. Since 2013, I have attended EDC Orlando for the last three years, this year will be my fourth year. This year has been a very hard year for us here in Orlando, especially after the horrible events that took place at Pulse Nightclub back in June. This year will definitely be an interesting and eventful one. Can’t wait to dance with you all under that beautiful electric sky.