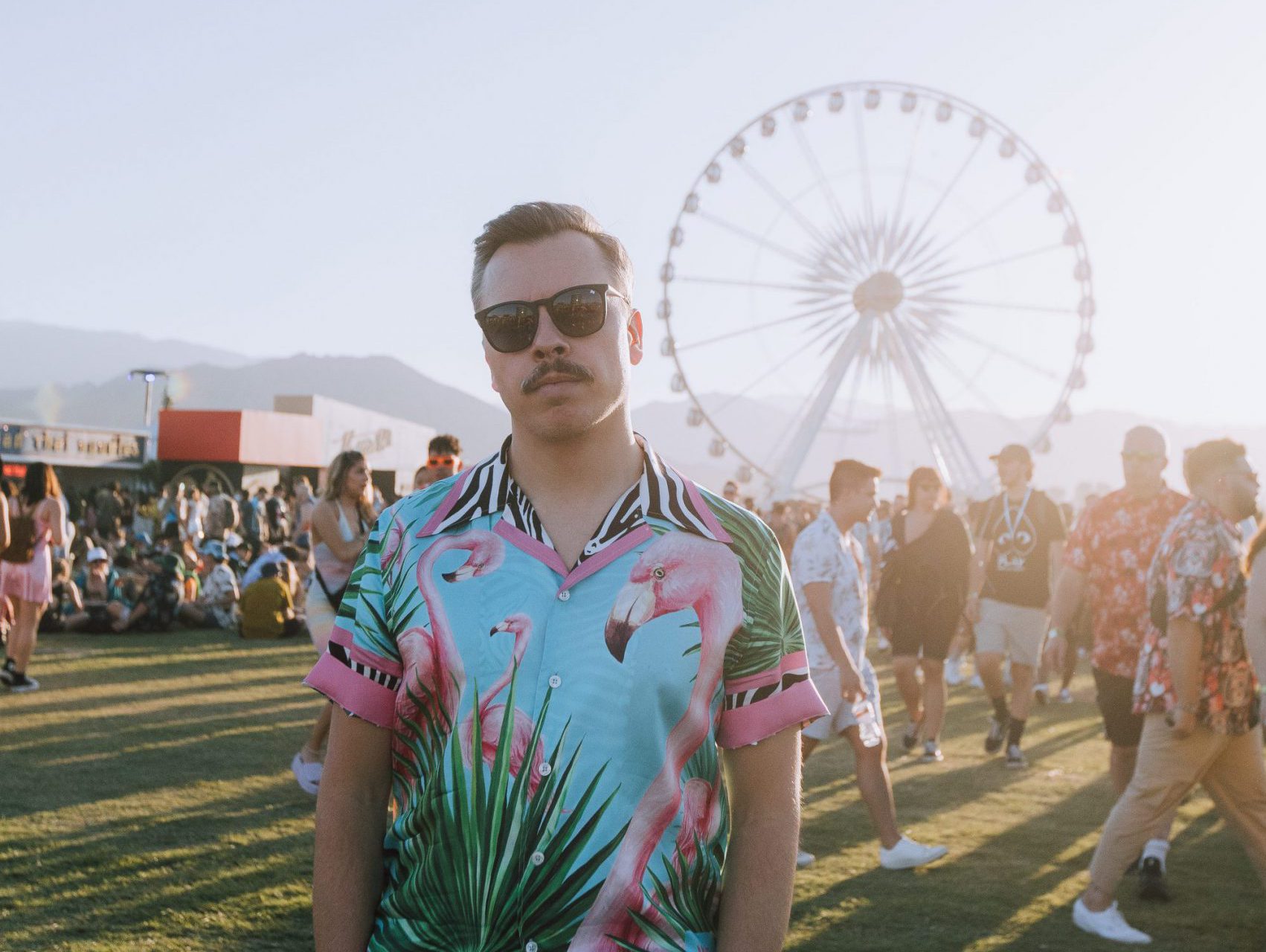 Get up to date with Purple Disco Machine as he discusses his recent performances, Exotica (Deluxe), “Wake Up!,” and more!

Purple Disco Machine has been setting dancefloors ablaze with his unique deep funk/disco infusion over the past decade. Tracks like “On My Mind,” “At Night,” and “Feel My Needs,” are synonymous with a great night on the town and his latest track, “Wake Up!” pushes us over the edge into a pool of happiness, packed with a festive groove that you’ll be humming to yourself all day long. In fact, no matter where you land on his discography, if you’re in the market to lift your spirit, Purple Disco Machine will never leave you hanging.

Fans are still gushing over his latest LP, Exotica, and he was even gracious enough to re-release the album this year as a deluxe edition with three brand new party-pumping tracks. One of those tracks is called “Rise” and if you’re ever down in the dumps, this tune will get you feeling right as rain as the lyrics inspire you to stand up for what you believe in. And for the lovers among us, he added “Twisted Mind” – a tune that speaks to the often chaotic but fulfilling nature of romantic infatuation – and “In The Dark” which is the yin to the aforementioned track’s yang.

On the live front, he’s equally satisfying. Just recently he played the iconic Coachella in the Yuma Tent, Red Rocks for Chromeo’s Funk On The Rocks, and also made his return to the Balaeric island for Glitterbox – Hï Ibiza. This one was extra special because he’s been no stranger to the Defected Records Glitterbox brand, appearing on their podcast as well as multiple live events including Printworks London. If you haven’t had the chance to see him live then I would suggest putting him at the top of your list this summer, but only if you want to have the best night of your life.

In honor of his recent releases and his highly anticipated return to Ibiza, we wanted to touch base and have a little chat with the man that always gets us grooving! So continue on for our conversation and don’t forget to grab your copy of his latest single “Wake Up!” with Bosq and Kaleta as well as the deluxe edition of Exotica!

Hi Purple Disco Machine, thanks for chatting with us! You just played at Red Rocks as part of Chromeo’s Funk On The Rocks. Can you speak to the feeling around playing at such an iconic venue? And, how does the stunning visual atmosphere of the venue (like Red Rocks) help to shape your set, if at all?

It was great to play at this amazing venue in support of my good friends Chromeo. However, I don’t really change my set to suit a specific venue. If you came to see Purple Disco Machine and Chromeo then I know you are a funk and disco fan, so I just did my thing!

Now that summer has arrived, the island of Ibiza is the hot spot to party. Fill us in about your favorite moments performing at Glitterbox – Hï Ibiza and what makes the Glitterbox events stand out as a must-attend?

Hi Ibiza just won the award for #1 Club In The World and it is well deserved. Glitterbox is really the only major night in Ibiza catering for Disco fans so it is always wonderful to play that show. The crowd is very energetic and they love the music.

When you visit the island, what’s your favorite thing to do during your downtime, and what should first-time visitors check out?

The beautiful beaches and the fabulous restaurants. For first-time visitors, it depends on where they are staying, but I’d advise hiring a car and trying to see as much of the island rather than just the inside of nightclubs! Take in the north for the more rugged beaches and hippy vibes, the east coast for the famous sunset moments, and the main port of Ibiza Town for the historic architecture, the beautiful squares, and the cool shopping. And everywhere you go there’s always somewhere great to eat and chill out.

The last time we spoke was back in 2020 just before the pandemic decimated the dance music scene, yet it seemed like it didn’t slow your ascension in the scene in the slightest. Can you speak to your experience over the past few years and what kept you motivated?

Despite the relentless bad news and travel bans, I actually quite enjoyed it as I was able to spend a lot of time with my family and a lot of quality time in the studio, which when you tour as a DJ, is often hard to schedule. I was motivated to make as good a second album as I could.

You released your latest album, Exotica, back in October of 2021 which was three years in the making. How has it felt to have the album out and to see crowd reactions to its tracks at your live events over the past year?

It’s been amazing. We effectively had three radio hits from Exotica without any supporting live shows so it was a bit weird never seeing the crowd’s reactions to these tracks! Now we’re back to normal, I’m loving the fact that in so many countries everyone is singing the words back to me when I play the songs in my sets.

Earlier this year you dropped the deluxe edition of the album that saw additional tracks including “Twisted Mind,” “Rise,” and “In The Dark” see an official release. What led to your decision to release these tracks on the deluxe version as opposed to the original release?

I very much wanted the original version of Exotica to just be 14 tracks, but we also had three other great ones that felt very much part of the Exotica style, so it made sense to release them as part of the deluxe package. I’m pleased to say this idea worked as “In The Dark”
particularly is doing really well as a single.

You just released your latest single, “Wake Up!,” with Bosq and Kaleta. Can you give us the scoop on how this collaboration came to be?

I heard Bosq’s original version from 2020 and I thought if I added some Purple Disco Machine disco to it, it could become a big record for my DJ sets. I contacted Bosq and was down for this and we were so happy with the end result. It made sense to us and our label to release it as a single for this summer season.

The “Wake Up!” vinyl became available July 1, and in honor of this special release can you go in-depth about your personal love affair with vinyl and why it’s so important that we keep the style alive?

I grew up with vinyl all around me as my father was – and still is – an avid collector, which really was not easy back in East Germany / DDR in the ’80s. And when I started as a DJ it was the vinyl era, and so, it is the roots of Purple Disco Machine. Plus, I was such a good customer at my local vinyl store that they offered me a job behind the counter, so I also have the experience and memories of selling vinyl.

The house music scene has churned through a number of different “popular” genres over the past decade, with the latest being the inclusion of Latin elements in tracks. While it’s difficult to predict the future, where do you see the house music scene heading in the rest of 2022 and beyond?

House music is nearly 40 years old, and Disco is 50 years old, so my prediction is that these genres are here to stay. To be honest I don’t really pay attention to the latest hyped subgenres. If I had, then I doubt I would be speaking to you now, as I would not have stuck to my disco guns when that was not a popular sub-genre of House about 10 years ago, and everything went very Techno!

Finally, what’s the best advice you can give to your fellow DJ/producers?

My advice to DJs is don’t follow the hype and accept things that you cannot change.