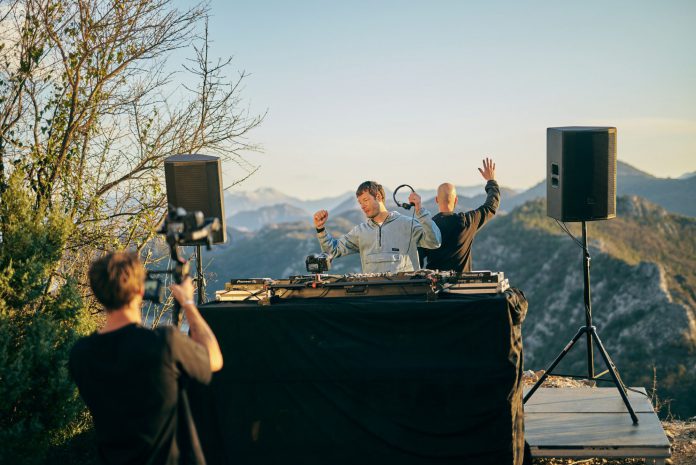 Jody Wisternoff and James Grant show that they can maintain their identity while continuing to evolve on Anjunadeep 13!

There are few constants in the world – now more than ever. Peace feels fragile, life unpredictable in the worst fashions (see: a global pandemic of once-in-a-lifetime proportions), and the general sense of unease has never felt greater in the past forty years. Luckily, there are pockets where we can collectively cocoon moments away from the madness and find solace and the lovely team at Anjunadeep serves up one of those cocoons on Anjunadeep 13.

Curated by Jody Wisternoff and James Grant, Anjunadeep 13 weaves a sonic tapestry that uplifts and warms the soul. The 40-track selection from these two titans of the industry offers solace, calmness, and an energy that can slot into just about any gathering. Having dinner with friends? Perfect soundtrack. Enjoying a ride on a bike through the trails, city, or taking a ride by the beach? Perfect soundtrack. Doing chores around the house? Perfect soundtrack.

In short, the obvious takeaway is that Jody and James’ craftsmanship drives a wonderful sonic tapestry to fit nearly any mood. It is an ode to both the beauty of the producers and acts they feature, the longevity and heritage of the label and perhaps greatest, the art of the mix. Anjunadeep 13 deserves a spot on your shelf, even if it is only digitally. Grab your own copy on your preferred platform now and dive into our review.

Jody Wisternoff and James Grant craft an immediate mood as the first half spins up.

After an ambient moment serving as introduction thanks to “Ashes” by Michael FK, the two mixmasters cut grooves with a mashup of three works they helped produce. Combining their Anjunadeep remix of P.O.S’ “Not Going Back” with the new single “Pursuit of Happiness” and with “SpaceTime” – a collaboration with Braxton – keeps things atmospheric. Setting the table with breaks, atmospheres, and moods establishes the strengths of creativity in what is to come.

Cubicolor builds on the moods with “Summer & Smoke” – warm yet brooding in a way that can only be described as spawned from the UK pop music scene when it finds an alternative vibe. An interlude composed of Braxton’s “(Don’t) Wake Me Up” gives way to an infusion of breakbeats on Promnite’s “Absolute.” Do not underestimate this one – it may be centered on breaks, but the progressive atmosphere is lush! The radiant ping-ponging bell-work feels exquisite!

Nōpi continues the ambient lushness, playing with a cinematic mood, blending both ambient and progressive motifs on “Tree.” Nordfall’s “A Different Life” exudes the sound of Orkidea’s best pieces but touches on nostalgia in sample selection. The vocal sample sounds straight from the ’90s era of dance music; a period of rapid growth and expansion for the genre budding from the era of synthesizers.

Budding above the warmth is “Muse of Mine” by Westseven & Ross Farren. It won’t break through the way “All In” did during the pandemic, but something about this one just feels so perfect for 2022. You can imagine it played at a rooftop bar or pool party while watching the sunset. This one just… it is not easy to put into words. Just give it a listen and open the ears for some sweet bliss.

Our mixers give way to a veteran of the Anjuna family next – Lane 8 – to kick the back half of the first mix into gear. The unique airy remix of “What Have You Done To Me” thanks to Jody Wisternoff, James Grant, and PROFF keeps things light, but establishes a solid groove to build upon. Rezident’s remix of Ben Böhmer and lau.ra’s “Erase” brings in a touch of older progressive sounds like Adam K & Soha. Music is a cycle after all. As we continue, the mix gives way to “Lullaby” by Nox Vahn, which returns the energy back to a steady smoothness.

The hypnotic strings of Steven Weston‘s “Like I Used To” combined with Låpsley‘s vocals waft like a sweet apple pie luring your appetite on a warm summer day. “Division” by Warung and “World Away” by Oliver Wickham keep the groove building. The latter of the two exhales a vocal that feels very retro ’80s; let the clock tick backward in your mind.

Julie Church’s vocal performance on Nils Hoffmann’s “9 Days“‘ stuns the heart – much like Above & Beyond‘s “Counting Down The Days” with Gemma Hayes. This could wind up as the next sing-along anthem for the progressive house fans. Take a listen below and drift into the ether!

The Murky Edit of Just Her’s “Depend On Your Love” feels beautiful and inviting with its handpan use, reminding us of the human in electronic music. This kicks off the final three tracks of the first mix, but the tempo gives way as things slow down for “Return To A Place Called Heaven” by Warung. The broken beats reign here – atmospheres, slower tempos, and thoughtfulness pull in asking for us to unwind. Jon Gurd closes the first mix with “Open” – fittingly organic given the tempo’s slowed piece.

The second half of Anjunadeep 13 rekindles the magic.

James Grant expands on the approach for this mix stating, “Our growing label family has been on fire lately, with more amazing music than ever.” Opening with James & Jody’s remix of São Miguel and Sebastian Reynoso‘s “Hope In Balance” exemplifies his point. This is not a name you likely know yet – but the mood presented definitely means you will in the future. Budding from that same vine is “Us” by Juno Mamba. Glide on the dance floor – in your mind, or under your feet – as we reunite in a global dance music dreamscape!

Rae Morris combines forces with Lane 8 lifting yet another page of the sonic story on “No Fun.” This is another track that likely becomes an anthem of the direction Anjunadeep heads. The lyrics are silky, the production clean, and the moody vaguely poppy. Take a swim in this pool – it glimmers with clarity.

Nostalgia breathes out of Makebo & Amonita‘s “Back To The Roots” – a certain melody will certainly be recognized in the strings here for long time electronic music fans. If you don’t recognize it – look up the orchestral version of a song titled “The Last Time.”

Cornelius SA’s “Soaring” brings us back down to the drones and beauty of today.

There’s a touch of handpan in the way the synth’s programming, and it feels stunning on “Soaring.” Then, listeners slip into “Rain” by Hessian next, and the mood lives up to the title – doldrums meet growth. Anyasa drafts Barbie Rajput for “Birha” – a somewhat ethnic but alluring vocal progressive track, which mixes splendidly into Tinlicker’s remix of Sofie Letitre‘s “Perfect Mistake.” Blissful sweetness is found in the depths of this one.

Simon Doty takes us on a two-for-one journey next, filled with pianos and dazzling high-end on “Living Sound,” and groovy bass lines accented by on “Tellin Me.” Both feel poised for great things as pool parties and daytime club activities slowly come back into the norm. If you wanted “Spring Break” or “CRSSD” vibes in your head today, these two ought to satisfy well.

Mona Vale locks in on the next track with “Pieces of You.” Booming with bass and a wonderful vocal hook grab the ears at the start. Then powerful chord hooks – loosely producing moods like the beauty of the Rhodes – playfully engage a funky guitar line. A feast for the ears lifts us a bit higher to the warmth of the Sun. This one is “never gonna give you up!”

Bantwanas grabs Noni Jali on “Inthombi” and brings back a bit of the late ’80s R&B flair in the piano chord choices throughout.

The nostalgia on “Inthombi” feels wonderful, even if this one slows down the energy that built up from before. “Fading” by Nicky Elisabeth gets a unique edit – here, driving forward behind an indie-pop moody vocal and a strong kick drum.

Jody Wisternoff & James Grant bring another edit into the mix here – whimsically calling us to the shores of Marsh‘s “Pretty Eyes” in Dub form. “Changing Lines” by Joseph Ray keeps the mood deep with the synthesizers rumbling the room on those excellent systems. Meanwhile, MOLØ’s “Alden” continues the cycle of give and take – a more ethereal ambient and bubbly lead pulls at the ears.

3STRANGE and Kenya Grace come together for “Someone Else” bringing some breakbeat/UK garage moods. Do not fret – this meshes wonderfully with the mood these mixologists curate for us. Just sample it for better understanding than words can do!

Simon Shackleton’s “Traumstaat” keeps the broken beats but ditches the funky for the sublime. Let the atmospheres roil with splendor. “Only” from Icarus builds on the beat affair – stabbing with strong chords of a piano, childlike in its transitions from one moment to the next. Finally,

Jody Wisternoff and James Grant leave us with a parting heartfelt moment in their edit of Leaving Laurel‘s “Winter In The Woods.” The specter of Pierce Fulton remains large on Anjunadeep’s family, and this touching moment feels like a soul in healing. We will not spoil this one – just get here, please.

Anjunadeep 13 solidifies the best of what makes the label unique

Hands down – this edition of the Anjunadeep compilation series hits differently than the rest. The loving craftwork that pulls on each sonic thread weaves a tapestry that shines brighter than any singular part. It plays as a testament to the talent not only of the curators but the individual creators making up the whole. If you love progressive music, if you love vibes that fit almost any moment, just add this to the collection of works you need to own. As someone along for the ride since the label’s beginnings, I can safely say you outdid yourselves!