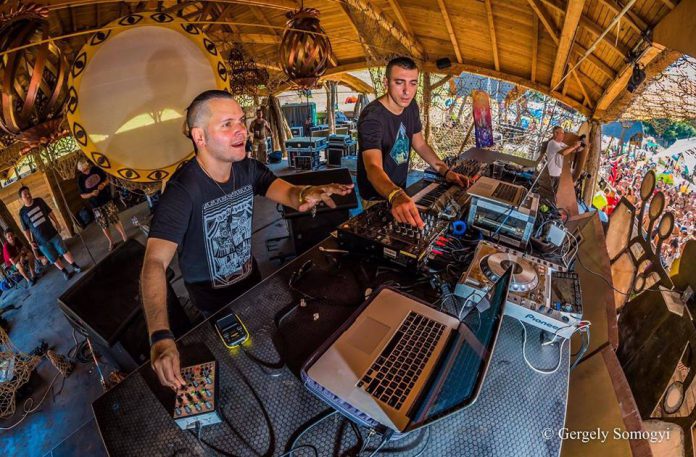 Each week, we will feature bios of DJs who will take the stage at Dreamstate SoCal this year, as well as some beats to help familiarize you with their work. Next in our series is… Alpha Portal!

Boasting border-free psytrance insanity, Alpha Portal will dive into your subconscious and unleash an energy unlike anything you have felt before!

It began as a few musically uninhibited meetings within the studio with two friends Astrix (Avi Shmailovand) and Ace Ventura (Yoni Ashrat). These two psytrance maniacs had been dominating the scene individually for over a decade and unveiled their vision to take psytrance to the next level resulting in the formation of supergroup Alpha Portal.

The dynamic duo signed under Hommega revealed their project to the masses just last year in 2016, debuting at Ozora Festival and following it up with spectacular performances at the Psy-Fi Festival in Holland and at our Trancegiving celebration Dreamstate SoCal. They took Dreamstate attendees on the ride of their lives as The Sequence stage overflowed with revelers just dying to get a peek of these brilliant artists in action. In true fashion, Alpha Portal delivered one of the most spiritually trippy sets of the entire weekend.

Creating unforgettable live performances with a handful of meticulously crafted original productions for psytrance lovers to sink their teeth into, Alpha Portal is the present and future of psytrance!

For two years, Alpha Portal have been working hard in the studio presenting three volumes of their fan favorite Dimension mixes, hitting all the right feels with their brilliant Full Throttle EP, and throwing caution to the wind with crowd-pleasing original tracks including “Creatures” and “The Other Side“.

This union certainly seems written in the stars. It is no coincidence that since the resurgence of trance here in the United States, the stage has been set for the industry’s finest to stretch their creative legs and run wild with the beats that drive their souls, not as one entity but united together in camaraderie.

It seems as if overnight we began to witness a new norm revealing itself in the form of combined talent, offering up unique twists to a sound that is ever-changing and ever-evolving. Alpha Portal comes to us as we are firmly planted in the middle of this glorious evolution and if you think that last year’s performance was off the charts, then prepare yourself for an even greater multidimensional journey to the stars. It goes without saying that these boys are prepared to hold nothing back!