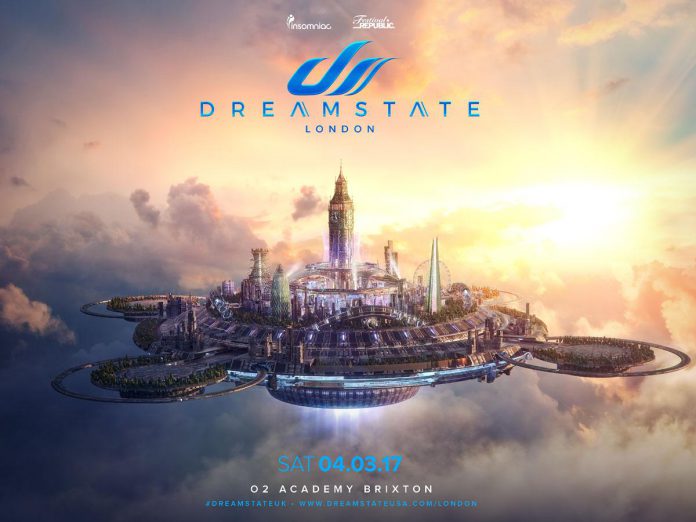 Insomniac’s Dreamstate will jump the pond in 2017 and land in London!

Dreamstate is ready to descend on the United Kingdom with a bold lineup for their first edition. For those of you excited to see the continued development of Insomniac Events major trance event brand – Dreamstate – you’ll be excited to see it jump across the pond as a solo-hosted event rather than a part of EDC UK.  On March 4th, 2017, Dreamstate London will bring trance bliss to fans at the famous O2 Academy in Brixton, marking its debut in the UK as a solo event.  Insomniac Events will be partnering up with renowned promoter Festival Republic for this edition of the event. Festival Republic is well-known in Europe for producing massive events ranging from Lollapalooza Berlin to the Reading and Leeds Festivals, as well as the United Kingdom’s edition of the Electric Daisy Carnival.

The lineup features a slew of familiar names and a couple of rising stars, all of which are sure to impress.  While the excitement builds for the four stage massive “Trancegiving” festival later this week, we’d like to reach out to our European brethren to take part in the magic of Dreamstate. Take a look at our experiences at Dreamstate SoCal, Dreamstate San Francisco, and Dreamstate New York to get a feel for the event.

Tickets are available now and cost only £35. Grab them today for the debut of Dreamstate London right here! Get to know the artists playing Dreamstate London 2017 below:

For those of you using Adblock, click HERE to watch the video!

As far as a look into the past series of Dreamstate events… well… take a peek below and gear up for the trance madness!

All photos courtesy of Insomniac Events.