A decade after reaching the top and then breaking up to explore other projects, Swedish House Mafia returned this year with Paradise Again.

If you turned back the clock to 2012 and asked a typical dance music lover who they listened to, there is no doubt that Swedish House Mafia would’ve been included in that list. The trio of Steve Angello, Sebastian Ingrosso, and Axwell had carved out significant space in the dance music scene, catching the ear of house music lovers around the planet who fell in love with their uplifting energy and infectious melodies.

Of course, the story didn’t start there. It began years earlier, officially in 2008, when the three Swedes first came together and married their sounds. Early results arrived with tracks like “Leave The World Behind,” which was co-produced with Laidback Luke, and the first single under the Swedish House Mafia moniker itself, “One,” with Pharrell. From there, the trio was off to the races with anthemic hits such as “Save The World” and “Don’t You Worry Child,” and energetic tunes that showed off their electro dominance like “Greyhound” and “Antidote” with Knife Party.

In 2013, Swedish House Mafia officially called it quits and split up for several years, with Steve Angello working on his own and Axwell /\ Ingrosso taking form. Many in the scene yearned for their return, while others had moved on or entered after they ended their run with no emotional tie to their music. That all changed in 2018 when Swedish House Mafia reunited for Ultra Miami’s 20th Anniversary celebration, which led to rumors that the trio was getting back together and new music was on the way.

As their fans began to wait for that new music to arrive, questions hung in the minds of many. Would their new music be similar to past releases? Would Swedish House Mafia garner love from new members of the scene? A string of shows in Stockholm and other cities occurred in 2019 and shined a brief light on that – but it didn’t feel complete. Flash forward to 2021, though, and it was clear that something special was brewing with the trio again.

The summer of 2021 was hotter than ever, and Swedish House Mafia intended to heat it up even more with “It Gets Better,” the lead single to arrive off their album dubbed Paradise Again. Flipping the script from their typical, anthemic house style that’s stadium-ready, this tune offered up a refreshed sound with breaks, guitar riffs, and yes, that cowbell everyone couldn’t stop talking about. It also offered a picture into the minds of the three creatives as they embarked on a new voyage, which changed when they dropped “Lifetime” with Ty Dolla $ign and 070 Shake.

That “Swedish House Mafia 2.0” sound was similar to their past work, yet different. This might be most evident in their single with The Weeknd, “Moth To A Flame.” It’s dripping with retro elements while incorporating the builds the trio has become known for and The Weeknd’s emotion-fueled vocals. Similar elements also appeared on “Redlight” with Sting, another jaw-dropping tune that landed ahead of Paradise Again‘s release.

Anyone wondering where the album was heading would find themselves a bit lost. But sometimes, when you’re lost and just wandering around, you stumble upon a gem – and that’s exactly what Paradise Again is.

Paradise Again was released on the eve of their return to Coachella for the world to hear.

The release of Paradise Again was marked by an exclusive party in Palm Springs on April 15 and broadcast via the app. It clocks in at a whopping 17 tracks in total and offers a range of different soundscapes for listeners to explore – from ones where you’ll find yourself dancing to others spent in reflection.

Paradise Begin opens with “Time” which features the talents of Mapei, one of the strongest tracks on the album with its infectious bassline and powerful vocals. Its lyrics speak to anyone who has spent time trying to heal themselves, a fitting re-introduction for a trio who had to do their own internal work as well.

It was already clear that strong vocal performances would be found throughout Paradise Again from its lead singles and lead track, but “Heaven Takes You Home” with Connie Constance was a surprise. Her vocals are an absolute dream, especially over the piano notes in the middle of the tune, and play perfectly with the backbeat from Swedish House Mafia, which will get you grooving the moment it kicks in.

“Jacob’s Note,” a track in collaboration with Jacob Muhlrad, who previously worked with them on the symphony edit of “One,” arrives as a perfect bridge to “Moth To A Flame.” While I’m admittedly not a huge fan of The Weeknd, I can’t ignore the strong performance he gives on this track – and it’s even better live.

The ever-unsettling “Mafia” arrives next with eerie tones to open the next chapter of Paradise Again.

While it might be one of the tunes least expected from Swedish House Mafia, the sound design on “Mafia” is impressive. It’s hypnotic at its core and thuds along with its runtime – acting as a solid bridge between the light of The Weeknd and the darkness of A$AP Rocky’s feature on “Frankenstein.”

Speaking of “Frankenstein,” while that track has been teased for quite some time, it felt like a lower point of the album. While it’s still well-produced, it just doesn’t feel like it belongs among this collection with its pacing, and during their performances at Coachella, it slowed their set to a crawl.

Have no fear, though, because the vibes pick up immediately with the disco-infused “Don’t Go Mad” with Seinabo Sey.

“Don’t Go Mad” stood out as one of the best tracks on the album, namely for its groove-laden beat that immediately transports you to the nearest dancefloor when you’re listening to it. It’s an absolute party across its four-and-a-half-minute runtime, even when it slows down enough as it rebuilds for an explosion of energy once again.

Another surprise arrives in the form of “Calling On,” which carries on similar thematic elements to the disco-infused “Don’t Go Mad” but brings it up to speed in the current era of music. “Can U Feel It” also achieves this with its booming tones that toy with listeners throughout its runtime. This is one I expect to hear played out quite often in the coming months, and it’s an absolute heater of a house tune and perfect for the main stage.

“Paradise Again” sees Swedish House Mafia flex their abilities to create cinematic pieces that are technically beautiful and hit all the right spots melodically. “Home” also sees them divert from the higher-impact sounds for a slow-burner that is best suited for the late hours of the evening when things are winding down. “19.30” also flips the script with a glitch-laden beat and distorted elements that give off “Antidote” vibes but in a way that’s pitched down and modernized to give off more of a modern, midtempo feel.

The final two tunes of Paradise Again wrap the album up beautifully.

Both “Another Minute” and “For You” are deeply personal and allow listeners a glance into the minds of Swedish House Mafia. The strong vocals on “Another Minute” yearn for, well, another minute, as if the trio is pleading with fans to stick around just a little longer. Then “For You” stirs up even more emotions with its choral vocals and heavenly tones before dropping a chilled-out beat, evoking imagery of watching the sunset on the horizon in Ibiza while listening to it. It’s refreshing, through and through.

Paradise Again has its ups and downs, but it clarifies that the future is bright for Swedish House Mafia.

Is Paradise Again precisely what everyone wanted from Swedish House Mafia? Probably not. But sometimes, you don’t really know what you want until you have it. The tracks found within this album show off the dynamic range that this trio plans to bring with them moving forward, and that should excite those who have followed them for years or recently found out about them. From the melodic, chilled-out side to the groovier, dance-fueled tunes, this release might just be the best snapshot of how these three starkly different producers co-exist in the same bubble – and for that, I’m grateful. 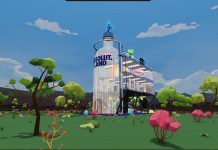