After the trio announced their return to the stage in 2019, let’s take it back to 2012 with a look at Swedish House Mafia’s absolutely epic tune “Greyhound”.

The third single off Swedish House Mafia‘s album Until Now, and arguably one of the greatest tracks they released, “Greyhound” is a tune that continues to hold up after years of getting played out by artists around the world. First released on March 12, 2012, the track was paired with a music video that featured three teams racing their robotic dogs against each other in the desert. Each dog was manned by a member of the trio and Steve Angello, Axwell, and Sebastian Ingrosso find themselves at the end of the race with a neck and neck photo finish.

A collaboration between two powerhouse brands from Sweden, “Greyhound” saw Swedish House Mafia partner with vodka brand Absolut to give the track some extra depth. While the vodka brand itself has nothing to do with the beat itself, they used the track to help promote their latest drink and helped SHM reach even greater levels of popularity in the mainstream as it was also featured in their television commercials.

Related: Swedish House Mafia announces their return to the stage in 2019, get all the details in our post!

While many may choose the more vocal offerings from Swedish House Mafia like “Save The World” or “Miami 2 Ibiza” when recalling their favorite tunes from the trio, “Greyhound” continues to be one of my personal favorites to this day. There is just something that hits me when I listen to it, the immensity of the track as a whole, that really kickstarts my engine and gets me going. Whether I’m driving or dancing the night away, whenever “Greyhound” gets played out I end up more hyped than before and ready to take on whatever is to come.

Watch the music video and let us know what your thoughts on this massive tune from 2012 are in the comments below! 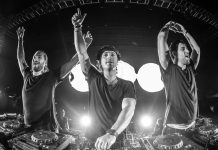