On Saturday, March 11, Christopher Lawrence and Pharmacy Music are taking over Avalon Hollywood!

Get ready for an illustrious night jam-packed with dark progressive psytrance and heavy tech trance. The line-up for this massive Pharmacy Music takeover reads like a Dreamstate SoCal mini-reunion. Trance mainstay Christopher Lawrence will be jamming throughout the night with No Comment and Orpheus, and tech trance legend John Askew who is appearing as a special guest. Pharmacy Music artist, Triceradrops will be kicking off the event and opening the night too!

Christopher Lawrence is a true legend in the trance scene. His career has spanned two decades and his love of the underground permeates his productions and mixes. He’s one of the few American DJs that have graced heavy-hitting trance line-ups and has also played massive festivals such as Ultra, Electric Daisy Carnival, or Coachella. What fans love about Lawrence is that he doesn’ forget where he came from and what inspires him, as you can often see him play underground events and staying true to his sound. Lawrence is the head of Pharmacy Music and is known for curating amazing beats and compilations over the years. Also, make sure to check him out alongside John 00 Fleming at Dreamstate SF 2017!

John Askew is appearing on the same stage as the special guest of the night. Askew is known for his ability to straddle the line between techno and trance and effortlessly blend the two worlds. Askew is arguably one of the best tech-trance artists in the game and one of the leaders in the tech trance revolution.

Julian Noriega goes by the name Triceradrops and is known for his unique and creative music stylings. He hails from Los Angeles, CA and often masters progressive psytrance, full on, and psychedelic techno.  On this night, Triceradrops will be hitting audiences with some amazing dark and driving techno beats.

Find out more about Triceradrops HERE!

Ready for a deep and dark night? Buy tickets for Christopher Lawrence and John Askew HERE.

Win a Meet and Greet with Christopher Lawrence, along with a signed copy of Christopher’s first artist album ‘All or Nothing’ on CD (collector’s items), plus some Pharmacy merchandise! 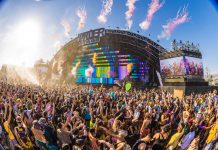 Win a Pair of VIP Passes to HARD Summer 2022