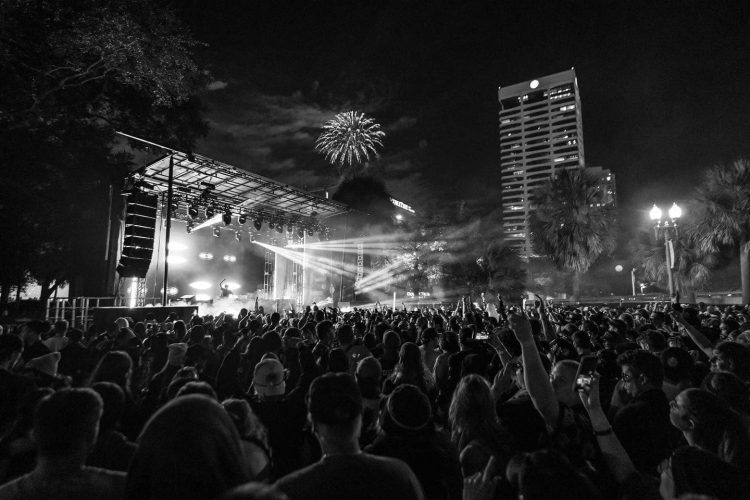 G Jones and Lab Group hosted a fantastic two-day event in Jacksonville featuring a stack of bass music innovators to ring in 2023 with a bang.

Amongst the stack of electronic music spectacles on New Year’s Eve rose the curated two-day event featuring G Jones and Lab Group at the MOSH Museum of Science and History in Jacksonville, Florida. G Jones is well known for his mind-bending, experimental electronic music and innovative sound design, while Lab Group continues to captivate those who love bass music with their own dynamic performances and releases. And for the end of the year, they not only hosted a lineup of epic proportions but incorporated a museum exhibit for attendees to explore and create their own landscape.

The first night of the two-day sold-out event was a killer start to the weekend. Upon arrival at the museum, parking was easily accessible, and there was little to no line to get in, which is often unheard of, especially at sold-out events. The merch line, however, was quite long but for a very logical cause. Most if not all, of the merch, was limited edition and only sold at the event. The Player Dave limited edition t-shirt was a personal fan favorite, and the quality is outstanding. One step past the merch booth, and the museum begins.

A walk from the first floor of a museum exhibit to an outdoor full production stage was an experience never to forget.

Immediately upon exiting the doors of the museum, music rang through the crowd, and bass was felt through veins. Atlanta-based experimental bass artist, Curra, was the first set of the night and the energy was already flowing. Showing up hungry and thirsty from travel, a trip to the food and drink tent was first on the list. To much surprise, the prices were unbeatable. A High Noon that would usually cost anywhere from $10-$12 was only $7. Not to mention attendees could get a freshly grilled hot dog for only $4. Balling on a budget? This is the event to be at.

Next on the roster was Huxley Anne, followed by the dynamic duo of artists Black Carl! and VCTRE known as Integrate. Integrate always does a great job at incorporating halftime, experimental, and a sprinkle of drum and bass. Definitely an act not to miss. KOAN Sound was on before the final act of the night and started out slow-paced, giving time to breathe and really take in the beauty of the event.

Halfway through, the beat picked up and had the crowd feeling energized for the closing act, Lab Group+. To sum it up, Lab Group+ was a mystical oasis that we didn’t know how badly we needed until it was presented. The set was an escape from reality and the worries that come with the days, a true gateway to the connection between emotion and sound.

The first night was an unforgettable journey through sound and exploration, but New Year’s Eve night was the cherry on top.

The second night, New Year’s Eve, had an equally stacked lineup as the night before, but the vibes were even higher as the event began only a few short hours before the beginning of the new year. Arrival was just as smooth as the night before, and catching Saka b2b FLY was the first priority of the night. The two did not disappoint, and the high-energy set kicked off the night in true NYE fashion. In preparation for the remainder of the night, a trip to explore the museum was necessary.

The feeling of being able to easily take a step back inside from an electronic music show and explore a museum exhibit was exciting nonetheless, while there were additional installations from the likes of Renee King and the Disease Biophysics Group to check out. And because this was in an actual museum, the comfort of being able to use a real bathroom instead of a porta-potty was a pleasant surprise, even if there were long lines to use them at times.

The biggest must-see of the weekend was the planetarium. The light show that was being presented allowed viewers to either be seated or lying down. Lying down was super comfortable and made it easy to view the show presented on the dome’s ceiling. The lights went to the beat of experimental music, and there was a round of applause after each track concluded. This was definitely another standout moment and made the experience really special.

After a quick trip to the cosmos in the planetarium, it was time to get back to the music.

Eprom and Lunice were the final two acts leading up to G Jones, and it seemed as if time flew by as midnight approached. The anticipation was at an all-time high as G Jones approached the decks. The entire set, from beginning to end, had the crowd in a chokehold. Playing old, new, and never before heard tracks, the set was the perfect way to ring in the new year. Aside from being a minute or two late for the NYE countdown at midnight, fireworks in every direction presented a distraction, and the entirety of the set was seamless.

The night closed out near 2am with a back-to-back set featuring G Jones and Eprom. These two electronic music masterminds were in full force and put on a truly unforgettable show. The entire weekend of the G Jones New Year’s event was one of the most smooth and energizing experiences one could imagine. From some of the best names in experimental bass music to the experience at hand, 2023 is looking bright.