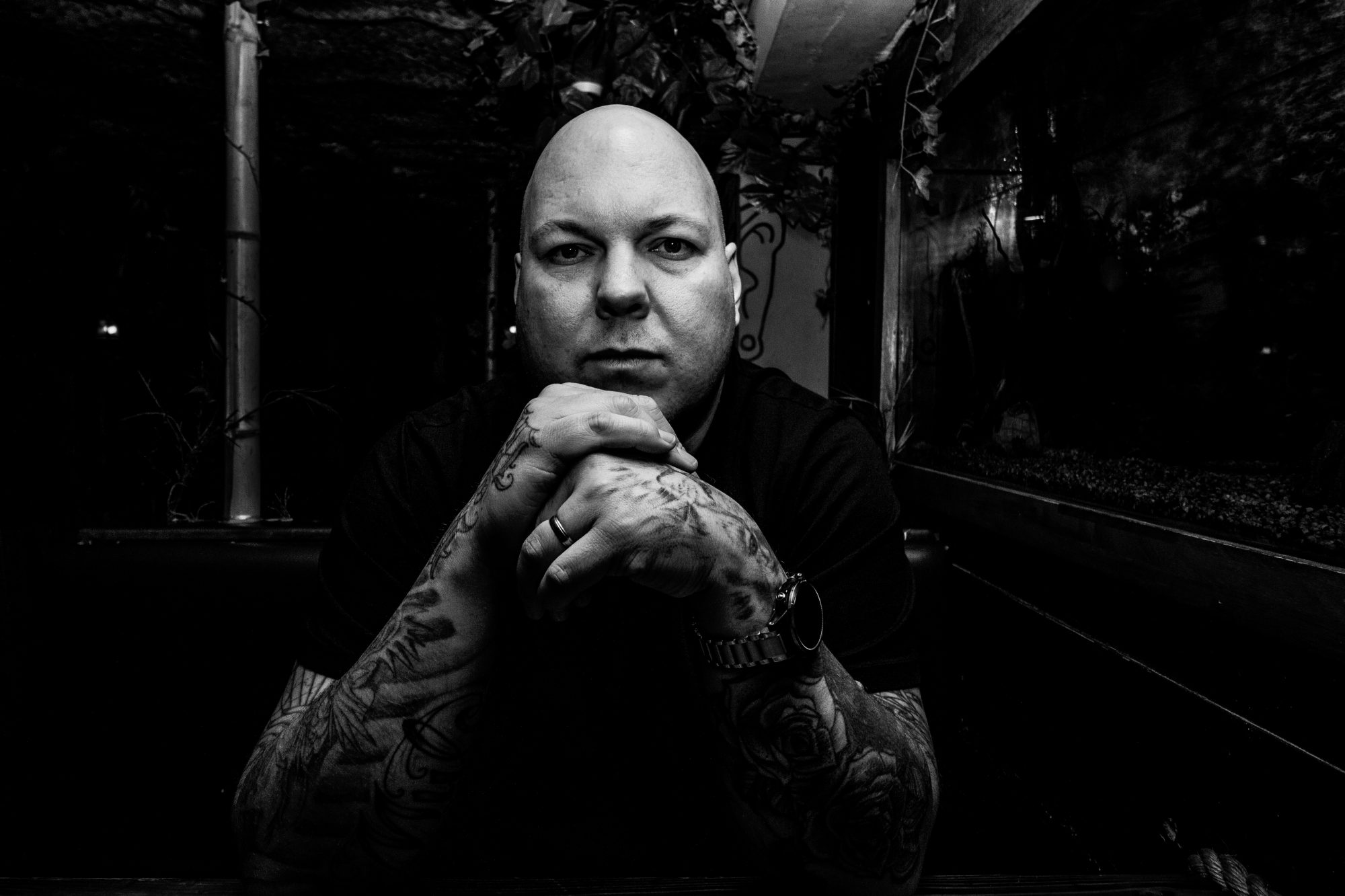 Ahead of the release of Machine Therapy on Anjunadeep, Alan Fitzpatrick swung by to dive into the story behind the album’s creation and more.

When it comes to the techno scene, it would simply not be complete without the UK legend Alan Fitzpatrick. Finding his footing in the early 2000s, he would go on to create mind-altering fire starters including “Reflections,” “Take Control,” and “We Do What We Want.” Many of these tracks found a home on labels like Drumcode, Toolroom, Defected, Hot Creations, and his very own imprint We Are The Brave. But through it all, one imprint was missing out on Alan Fitzpatrick’s musical magic, Anjunadeep, and that’s all changing before our eyes with his album that’s due out on November 12.

To be more specific, Machine Therapy is the album that we speak of, and fans have already been privy to a few of its tunes, including “Warning Signs,” “W.A.I.S.T.D.,” “Bourgeois Imagery,” and his latest release, “A Call Out For Love.” These tracks shine a light on his boundary-free creativity, produced during a time in which the world had come to a complete stop. But, instead of wallowing in despair, Alan Fitzpatrick took this as an opportunity to pour his soul even deeper into his craft and provide his fans with a spectacular soundscape that is sure to leave you breathless.

In honor of this significant milestone, we caught up with Alan Fitzpatrick to get more insight into the Machine Therapy project. So grab a drink and kick back and relax while we check out some of the tunes from the album and get to know more about the forthcoming release. Of course, don’t forget to pre-save your copy of Machine Therapy on your favorite streaming platform.

Stream Alan Fitzpatrick – A Call Out For Love feat. LOWES on Spotify:

Hello Alan, thank you so much for taking time out to chat with us! Congratulations are in order because you’re about to release your first album in a decade, Machine Therapy. The inspiration for the album comes from your time spent in lockdown, so can you go more in-depth about that experience and the design of ‘Machine Therapy?’

Thanks for having me. Lockdown was an uncertain time for everyone, but having my career and livelihood stripped away really affected me. It was a bit surreal for the first couple of weeks, but almost six months in, I felt drained and detached from my usual self. I spent a lot of time in the studio messing around with the hardware. It was therapeutic for me and, in hindsight, a great coping mechanism. Hence, I named the album Machine Therapy.

I didn’t start the project with any concept in mind, the album kind of feels like a deep exploration of my musical scope. At the time, I was writing music for experiences outside the club, which was unusual for me as an artist. But I’m really proud of the finished product. It isn’t a club album, more of a listening experience – hopefully, there’s something in it for everyone.

Ten years can certainly bring on a lot of creative growth. So, when comparing Machine Therapy to your 2010/2011 work like Shadows In The Dark and Insurgent Series, what are some of the major differences that reflect your future-forward artistic development?

It’s hard for me to compare the albums; the two mentioned were made pretty early in my career. They were made with clubs in mind, and most of the tracks were written and arranged for crowd reactions. I suppose I had different inspirations and influences at the time.

Machine Therapy seems worlds apart from those albums. To be honest, it feels like my first ‘proper’ album. It’s a carefully constructed long-player, records that I have really poured my heart into. Maybe that’s the main difference in the records – previous albums were for other people’s enjoyment, whereas Machine Therapy was mainly for me. Writing and producing the tracks was an emotional journey for me. It was an extremely cathartic process, and I think that’s reflected in the music.

One of the first singles you dropped off Machine Therapy was “Warning Signs,” marking your debut on Anjunadeep. Can you walk us through the collaboration process with Lawrence Hart, and what’s the story behind CamelPhat and Mind Against taking on the remixing duties?

I met Duncan [Lawrence Hart] through a mutual friend and always wanted to make some music with him. His vocal is one of the most powerful I’ve ever worked with. Obviously, the track was made during the lockdown, so we didn’t spend time in the studio together as such, but we bounced some ideas back and forward, and the final track was genuinely mesmerising. The lyrics are so deep and considered – his wife actually directed the music video for the single. It’s a wicked video that really accurately depicts the emotions of the music; if you haven’t seen it, you should definitely check it out.

As for the remixes, I’ve worked with CamelPhat before. I respect the lads and knew they’d be able to add something special to the track. Their remix has an 80’s vibe to it, which I love. Mind Against is another duo I respect – their music is always very emotive. They were into the track, and it seemed like a good fit having them on board.

The second single off the album is “W.A.I.S.T.D.” and it features the vocals of KELE, the lead singer of Bloc Party. I’m interested to know how your working relationship was born and what’s the story behind the track?

Working with KELE was an honour. I’ve wanted to work with him since I heard Bloc Party’s Silence Alarm album in 2005. I was patient and persistent for a long time, but we finally made it happen. With “W.A.I.S.T.D.” I really wanted to create a festival-style banger, with hints of “We Do What We Want” but with a seriously catchy hook and huge ravey sawtooth lead and acid line. The track was basically already done by the time I sent it to KELE. He instantly got the vibe and ran with it. The top line brought the whole thing together, and it was a real moment listening to his finished version for the first time.

Next up we have “Bourgeois Imagery,” a collaboration with DnB legend High Contrast. Can you talk about your love affair with DnB and why you chose to incorporate these exciting sounds into your latest album?

I’ve always been a lover of the genre, and I actually mixed a bit of DnB when I was a teen. Where I’m from in Southern England, the DnB scene is huge. It’s no secret that I love the rave and all genres associated with it, and I like to be as versatile as possible with my production style. Link and I would bump into each other a fair bit when we were touring, and we have a lot of mutual respect for each other. Having the opportunity to work with High Contrast and have him featured on the album was quite special for me – he’s a legend, and the track is ace.

As far as the rest of the album goes, can you leak any details that will shoot our anticipation to the next level? Is there a dark horse track that you know is going to whip listeners into a frenzy or maybe a track that holds the deepest meaning of the lot?

Got to be “The Sweeper.” It’s the track from the album that’s closest to my typical sound, the sort of tempo I play in my DJ sets. It’s a proper club banger that will set the pace for 2022 and what to expect from me as an artist. It excites me because I get to play it to crowds and feel their reaction, while most of the other tracks I’ll never be able to play out. But I’m ok with that; it was never supposed to be that sort of album.

You have quite a few tour dates in November that are listed as TBA. Is this because you’re designing a tour around ‘Machine Therapy?’ If so, what can fans expect from your forthcoming shows that may differ from previous performances?

The TBA’s are there because the events were unannounced at the time when I posted the flyer. I’ve added a few gigs to the Machine Therapy tour, mainly in the UK and Ireland, with a weekend in North America too. People can expect lots of energy from me. It’s been 18 months since I’ve been doing the club circuit, and I’m raring to go. I’ve got lots of new music to play, including a heap of unheard edits. I’m very excited. The album tour will be wicked, but people always get my best performance, no matter what the gig is.

All this talk about your upcoming release on Anjunadeep but we mustn’t leave out a chat about your personal imprint, We Are The Brave. What exciting things do your artists have currently brewing up for us over there and are there any new artists that your label is eyeing up?

We Are The Brave has come back from lockdown bigger and better than ever. We’ve got some new music dropping from BEC, Tenzella, Gary Beck, and a collaboration between myself and BKLAVA. 2022 is going to be fierce, and we’ve got some label parties on the horizon which I’m really excited about.

Finally, with your album drop right around the corner and the event circuit gearing back up, the future is looking very bright! What are some of your refreshed goals, dreams, and desires for the upcoming year when it comes to both your personal and professional life?

I’ve definitely got a renewed love and passion for music. My drive is back. I’m writing for myself again and not even thinking about other people or their opinions which is a great feeling in itself. I’ve got tonnes more bangers up my sleeve, aimed at dark clubs. I feel like my career has taken a new trajectory, and it’s very exciting.

I’m expecting 2022 will mean a lot more growth as an artist and label head, but also as a person. I’m also really focused on having a better work/life balance; more fishing, more cooking, more time with my family doing all the husband and dad stuff. Lockdown made me realise just how important all these things are for my mental health and wellbeing. I genuinely feel revitalised now – Fitzy’s back and better than ever.