A headline debut at Red Rocks marks a huge milestone in any artist’s career and Said the Sky brought an unforgettable performance.

Red Rocks in Morrison, Colorado has served as one of the most coveted venues in the country, if not the world. With world-renowned acts taking the stage since 1941 it is undoubtedly every artist’s dream to headline at a venue as iconic as this one. Since the rise of electronic music, artists in a range of genres have made their mark on the stage within the hypnotic rock formations including the likes of Kaytranada, Rezz, Louis the Child, Zeds Dead, and ZHU, among others – many of whom have played since the venue reopened. And on Saturday, September 4, Said the Sky finally got his chance to headline the venue.

After a long walk up dozens of stairs, we made it into the venue with a swift entry. The first thing we checked out was the merch table featuring special a jersey, hoodie, shirt, hats, and flag specific for the event. After finding the perfects seats, we enjoyed the extraordinary opening lineup with the crowd truly vibing and feeling the music more so than any other show I have been to in the past.

For his headline debut at the festival, Said the Sky curated a fantastic night for fans by bringing a colorful lineup of Midnight Kids, CloudNone, and Sundial to join him. Each of the artists who took the stage brought their signature sound and unique style along with them. Midnight Kids, who I was excited to finally see live, delivered a sublime set, while CloudNone brought the progressive house and plenty of vibes to the venue. And vibrant duo Sundial offered up even more warm feelings with them through their guitars and microphones.

The stage was finally set for Said the Sky who pulled out all the stops for an unforgettable night of alluring tunes.

In a dramatic entrance onto the stage Said the Sky opened with an edit of his break-up ballad, “Over Getting Over You” which had the whole crowd singing along to every word. Accompanied by live drummers and an array of violins and cellos, he not only took our breath away behind the decks, but he joined his instrumentalists playing a grand piano which hypnotically glowed on the stage. His soaring melodies radiated throughout glorious rock formations as Olivver the Kid joined him on stage for their recent collaboration, “We Know Who We Are” along with other tracks.

With his breath-taking stage setting and vibrant visuals, Said the Sky illuminated the entire amphitheater and infinitely delighted the audience. The whole show left me mesmerized as a wave of happiness completely took over. He played a variety of tracks from his debut album, “Wide-Eyed,” his latest single, “Treading Water” with a visualizer to further add immersion. He also energized the crowd with “Where’d You Go” one of his collaborations with Illenium as pyro brought some heat to the stage.

He ended the show with “Sad Songs‘ another collaboration with Illenium as he played guitar and Annika Wells sang together under a spotlight that illuminated the stage. Bringing his strings, drummers, and Olivver the Kid to join them on stage as he hit the decks once more for a grand finale of this song.

Without a doubt, Said the Sky delivered the most unforgettable show I personally have ever attended.

Upon leaving the venue I caught up with Bennett Lugosi who flew from California to be there. He offered up his thoughts on the show, saying “Said the Sky did what he usually does and put us through an emotional experience, not just a show. Something just felt so right being at Red Rocks and listening to his beautiful melodies. The setting and the vibes just meshed so well together!” I couldn’t agree more with him on that statement.

No matter the venue or the setting, he connects to his audience through lyrics and visuals as he evokes every emotion. I certainly left the amphitheater feeling an overwhelming sense of happiness. And with shows back up in full swing, Said the Sky is one artist you do not want to miss next time he comes to a city near you. 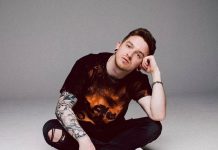 Said The Sky Ends His Trilogy with New Video For “Go On Then, Love” 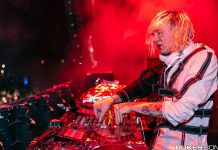 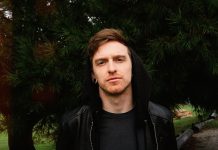