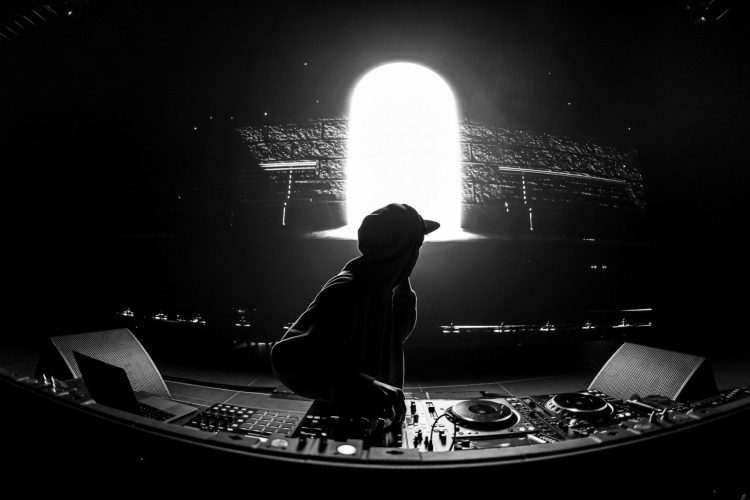 Known for his monochromatic brand and for bringing his experimental sound design to some of the biggest festival stages in the US, G Jones releases his first solo EP since 2019 on his independent record label Illusory Records. After premiering his latest work on his IllusoryOS tour this spring, these tracks were played throughout this summer and fall’s festivals, including Bass Canyon, Lost Lands, Second Sky, and many more.

Fans got a teaser of these mind-warping recordings from G Jones and Eprom‘s collaborative mixtape Disk Doctors earlier this fall. Several of the tracks dropped as singles before the EP’s release featuring collaborations with Eprom and ISOxo. The compilation as a whole is a paragon that will deceive your mind into an altered state of beauty and chaos.

Make sure to medicate your mind by streaming Illusory Tracks on your preferred platform, and read on for a deeper dive into the tracks. Don’t forget to catch G Jones on NYE if you want to end the year properly!

The first triad of tracks teleports you to a dimension of earth-shaking bass and bone-breaking kicks.

“Operator” was released as a single and acts as if G Jones is “calling” the listener to open their minds. He accomplishes this by using repetitive sounds and melodies akin to an automated phone recording, with samples of ringing tones implemented on the second drop.

Then, G Jones utilizes his UK bass influence for “Elysian Hardcore.” While this is not actually a 180-200 BPM hardcore track, it is sure to meet that measure of power in its masterful sound design and psyche-stimulating drops. This track truly displays beauty within the chaos as it presents melodic woodwind samples amongst bass-filled kicks.

Continuing the brain-bending notes of UK bass-inspiration, “R.A.V.E.” with Eprom transports your mentality to a dancing illusion reminiscent of trap’s beginnings. With the inclusion of the counting vocal sample used in several other older trap tunes, this “rave” song is sure to bring you years back while adding a futuristic twist.

Turning down the intensity, the following duo of tracks tickles your brain with melodic synths.

“Patterns Emerge” and “Thought Tracing” allow you to breathe peacefully amid the mayhem of their surrounding tracks. The heavy use of repeating sounds in “Patterns Emerge” allows one to see reiteration in one’s thoughts. The dialed-up reverb in “Thought Tracing” mimic the action of tracing as it shadows the gestures. Both melodic songs bring you to a false reality with wavy trap sounds.

Ending the EP, “Say What” with ISOxo snaps you back to the real world with its abrupt changes in sounds and basslines. The complex sound design of this tune plays on the immense talents of both artists. Comparable to “Operator,” the track utilizes phone recording sounds, but in this case, the listener is “hanging up the phone” to return to reality.

The monochrome master plants his distortion in your mind once again with awe-inspiring sounds.

This transformative EP by G Jones carries you from picking up the phone to open your mind to disfigurement to constructing a dream-like sense to ending this “call” to return to the real world. He sets the tone of darkness in each track and will have you on the edge of your seat throughout its entire runtime, so make sure to give it a listen!