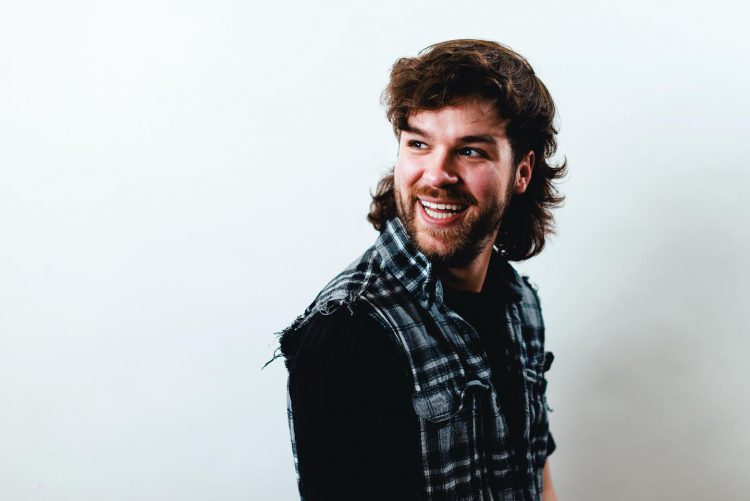 TVBOO stopped by to chat with us about his latest body of work, Blue Collar Bass, as well as the state of the scene, touring, and more.

TVBOO has quickly made a name for himself in bass music in recent years, with his Southern spunk and humor helping him become loved by producers and fans alike. Known for bringing a unique, wonky tone to bass music, he packs a playful punch with the releases that have landed labels like WAKAAN, Drama Club, and emengy, while dominating stages with his sound at festivals and events along the way.

Whether TVBOO is dabbling with some humorous samples in his releases and sets or sharing some laughs with guests on his TVLKS with TVBOO podcast, he’s an artist that brings joy to the scene day in and day out. This month saw him deliver his debut album, Blue Collar Bass, which helped showcase his artistry and ability to collaborate with other artists in the bass community.

As TVBOO continues his trip around the US on the Blue Collar Bass tour, he took some time to sit down and chat with us about his recent album, his ongoing podcast series, and more. Give his debut album a listen on Spotify or your preferred platform, and read on for the conversation!

Hi TVBOO! Thanks for taking the time to chat with us. We’re so excited to catch up with you after your recent release of Blue Collar Bass. This album featured 15 tracks that move away from your usual sound with many collaborations and vocalists. What was the creative process like of that coming together?

It was just me in a room trying to figure out how to push myself into creating music that I think is fun while also pushing myself to create something I haven’t done yet. I became a recluse and knocked out these tracks in the span of 5 months, and it was one of the freest I’ve ever felt creatively to make whatever the hell I wanted to.

You’re currently still on your Blue Collar Bass tour with just a few stops left. What’s been your favorite tour stop so far?

It’s really close, but I’d have to say Tempe, AZ. All the shows have been absolutely insane.

You’re clearly very proud of your Southern background. What was it like growing up in the South with a love for bass music? Is there a bass music scene in your hometown? If so, what does that look like?

You’re goddamn right I’m proud of it! I didn’t grow up loving bass music because it wasn’t around. I was a touring drummer, so I used to make fun of the music and all the DJs. Once I fell in love with the music, I started throwing shows, and that lasted about two and half years until I moved out of Mississippi. After I left, the regular occurrence of bass music sadly stopped.

Earlier this year, we saw you close out your set at Toxic Summer in SF with “Wook Worm.” It’s one of our absolute favorite tracks, and we were wondering, where was your mind at when creating such a funky tune?

Didn’t have a certain mindset when I was writing it. I was just trying to write a fun tune, and it actually wasn’t my favorite until I saw how much everyone else loved it.

Going back to the beginning of the TVBOO project, you gained some notoriety through your podcast “TVLKS with TVBOO,” with all kinds of intriguing guests. What is your favorite episode or guest of the podcast?

My favorite episodes are the ones where we don’t even talk about music. Episodes where we just talk shit are the ones that get me going. I can’t pick a specific one, so I’d say the ones with sfam, bawldy, Boogie T, Gardella, and Heyz.

You have quite the personality for hosting, with lots of comedic and honest moments for fans to connect with you and your guests. What are some ideal guests you’d like to have on one day?

I’d love to have DJ Diesel on the podcast. I’m a massive NBA fan, so that’d be an insane one for me. I’d love to have other comedians down the road. I have a massive list of people, but I have the mindset that I’m gonna have everyone on eventually.

Recently there have been a number of serious allegations made against artists in the scene. How do you handle all that information and what changes do you think could be implemented in the bass music community to better address that behavior?

It feels nasty. I don’t know if it’s how I was raised or me being from the South, but I was taught pretty harshly at a young age to respect women, so when I see stuff like this, it almost seems foreign. I think there needs to be better decision-making from all parties. I think it’s pretty easy to avoid these situations, but here we are. It’s also a touchy topic because if you say something that someone doesn’t agree with, you get attacked. This type of stuff brings the best and worst out of people, and I think the last thing anyone needs is some redneck telling folks how to handle this because I actually like my job and don’t wanna piss people off more than I already do.

Finally, just for fun, what is your favorite Southern food spot in Jackson that you’d recommend for someone who’s never been to the South before?

I’m going to shout out my old job, “Soul Shine,” on this one. Best pizza in town and a super awesome environment.