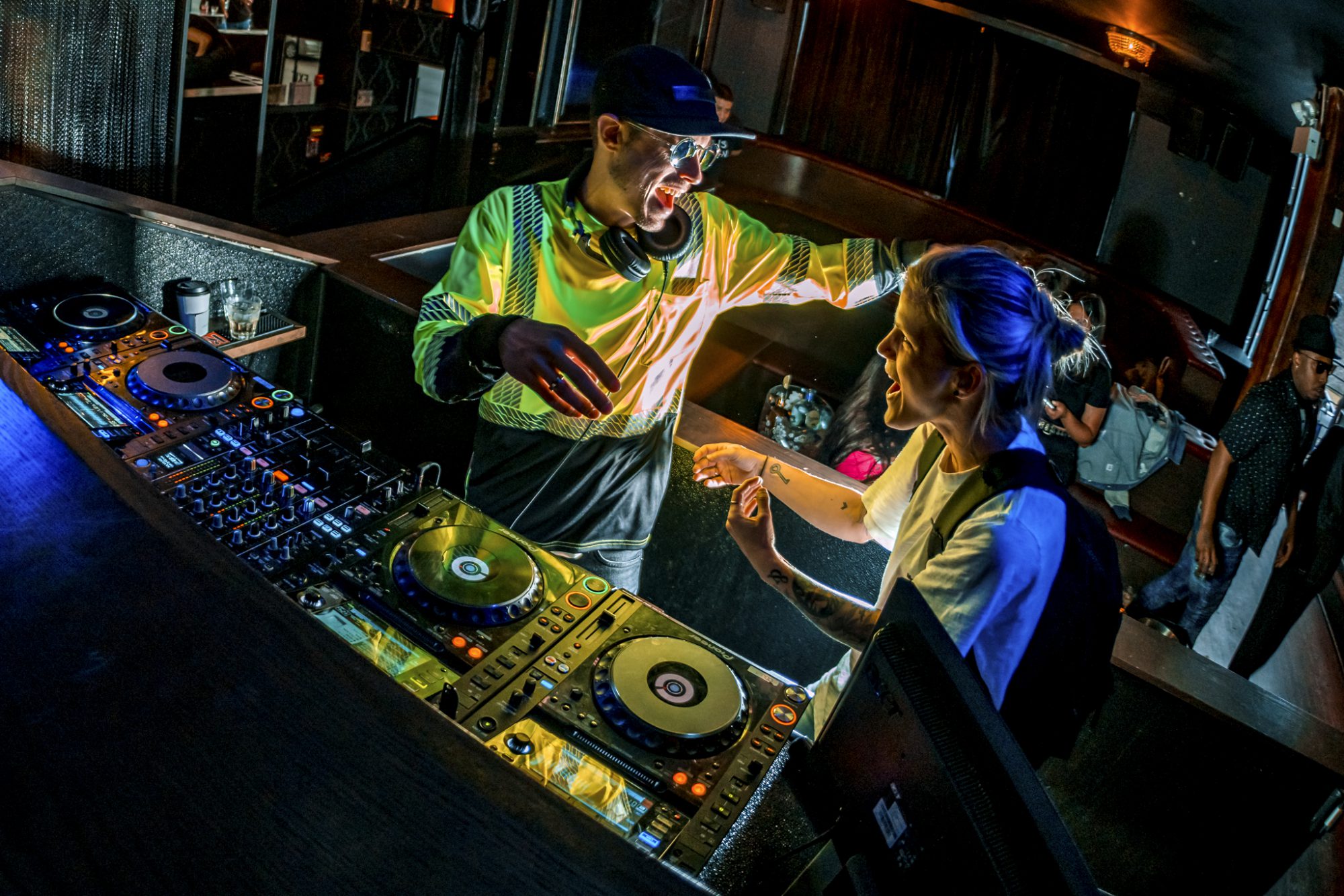 J. Worra and Codes sat down with us to discuss their new single “Bounce Back” and helped us settle the NY vs Chicago pizza debate.

Two of the hottest names in house music, J. Worra and Codes, have teamed up with Sophiegrophy for their first single of the year “Bounce Back” on REALM. Their combined talents created a bass fuelled house anthem with energizing vocals and a ’90s groove.

On one side is J. Worra, a versatile house artist who has played a variety of festivals such as Coachella, Dirtybird Campout, Spring Awakening and more. Her music has been released on a huge range of labels such as mau5trap, In/Rotation, Sweat It Out, Thrive, and now REALM. With an upcoming headlining tour and a busy festival season ahead, she is truly going to have her biggest year yet in 2020.

On the other side is Codes, who has been getting attention from major house artists like Claude VonStroke, Treasure Fingers, and AC Slater. His music has been released on major house labels such as Country Club Disco and Dirtybird, along with his own label Holy Molé Music where he is finding quality originals to bring to the masses. He also has a number of upcoming shows including several appearances during Miami Music Week.

Now, after coming together for the release of “Bounce Back,” which is available now for your listening pleasure, we caught up with the two artists to chat about their music and so much more. Download or stream their latest track on your favorite platform and read on for the conversation!

Stream “Bounce Back” on Spotify below:

Hi J. Worra and Codes, thanks for taking the time to chat with us today about your new single, “Bounce Back” featuring Sophiegrophy on REALM. Let’s start off by exploring your histories together. Do you two remember the first time you met in person? What was that like?

Codes: We have been internet buds for a while sending tunes back and forth but I think the first time we actually met was at Late Check out in Chicago. Shout out Dom Brown and all the React crew for putting that together! We all tagged at the end and were just like yo let’s smash out a tune. The press photo is literally from that day and kind of says it all.

J. Worra: Now that I think about it, I have no idea when Cody and I met for the first time. I do remember when I first heard of him and it was back in 2016 when he released ‘Bumps’… I still play that record to this day! Cody is a great human and extremely talented artist who still has a lot to show the world.

What brought the two of you together to team up for this track? Can you tell us a little about the collaboration process and how Sophiegrophy came into the mix?

J: Every collab is different but for this one, Sophiegrophy and I had already talked for a few years about working together. She recorded over one of my instrumentals and then Cody and I played a show together in Chicago and talked about working on a track. I knew how fun the idea was and it felt perfect to have Cody jump on it. We tossed the project back and forth a few times and the rest is history!

C: J sent me the vocals with a rough idea and I went in, sent back, then she sent back and I went in once more and it was a wrap. It came out so natural and easy (not always the case on collabs) we def need to do another one soon!

J. Worra, adding to the track’s release was news that you’re set to take the stage across the country on the Just Because tour spanning over 20 dates. How do you prep for a run of shows like this and is there a certain stop you’re most excited for?

J: This is my first North American Headline Tour so if I am being honest, I don’t know what to expect. I have some downtime in March and April when I plan to be in the studio making edits, remixes, and originals to play out on all stops. I am big on preparation, whether for shows or production, so people can expect new music and a few twists and turns in my sets to keep them on their toes. 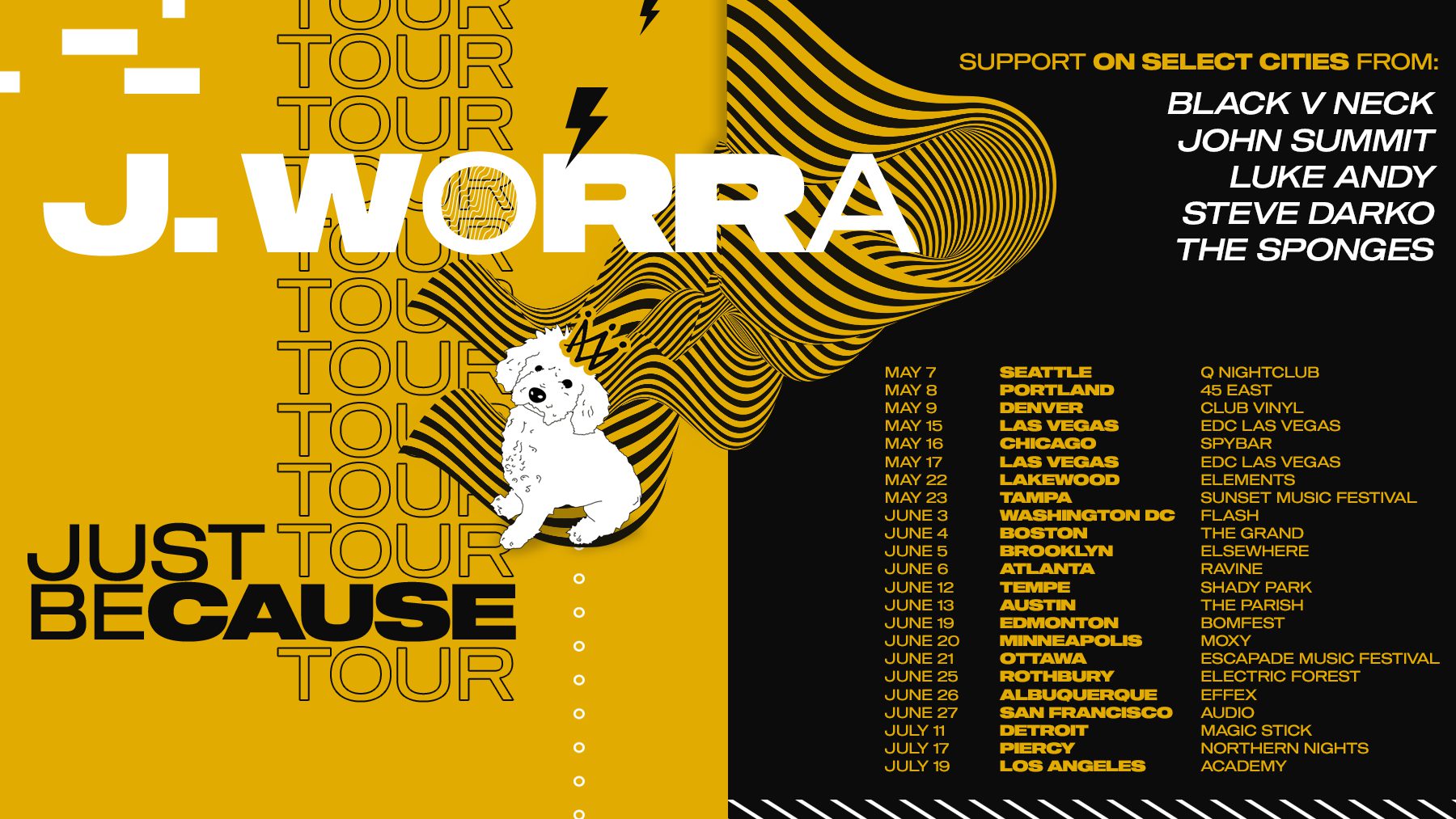 Just Because isn’t your standard tour either as you’ve paired it with philanthropic efforts like LGBTQ support, animal rescue/anti-cruelty, and suicide prevention. How did you select the charities you’re supporting, and do you feel that more artists should make strides in giving back?

J: This is a very personal thing for me. All the charities were carefully selected based on matters close to me and after researching major needs in various cities. For example, I found that at one point Arizona’s teen suicide rate was double the national average – they ranked second in the nation for teen suicide rates. This led me to dig into the groups helping that epidemic, which is why I chose Teen Lifeline for my Phoenix show.

I want to shed light on these issues with hopes that show-goers then decide to get involved with that local charity. I also think that my generation and younger generations want to get involved, but don’t really know where to start or how to go about it.

As for other artists, they are doing it in their own ways if you watch closely! Chris Lake has been taking a stand against the use of plastics, taking all single-use plastic off his rider and encouraging other artists to do the same. Desert Hearts run clothing and food drives and other efforts as a way of giving back. This tour was just the way I envisioned going about making an impact and raising awareness. I welcome any and all artists to get involved in this tour- donate, share the charities, come out to the shows, etc.

Codes, the last time we sat down for a full-on chat you had just finalized the formation of your label Holy Molé and since then you’ve released a number of stunners. Can you share what has been one of the most redeeming moments of running the label so far?

C: Every part of it has been pretty rad. I love the sense of community that has organically been building around this crazy epiphany I had in the airport a little over a year ago from today. Seeing people wear the shirts at shows and jam out to the tunes we put out. Usually you are relying on someone else to handle all of this so you have so much more of an appreciation for the process and vision when doing it all yourself.

Building off that, are there any upcoming releases on Holy Molé that we should be keeping our eyes peeled for in the near future?

C: I have a new one with Astronomar, new Black V Neck and working on wrapping up some remixes for an Eveningperple EP.

House music has gone through a variety of different “waves” over the past decade, with tech. progressive, and acid house truly at the forefront lately. What direction do you see house music going in the future?

C: That’s the million-dollar question huh? I pride myself on doing me but also being on the front line of what is next. I think everyone is ready for something new and refreshing. I can’t really say where the direction of house music is headed in but I will say I have been experimenting with a lot of new sounds in the studio over the past few months. Also working with more vocalists and collars as of late so really trying to push my sound to new directions this year.

J: It’s hard to say. To me, genres are not as pure as they used to be. There are so many sub-genres and overlap that it isn’t always easy to categorize some songs or even some artists. However, I am confident that classic house elements with unique twists will continue to surge.

J. Worra, you have a big March ahead of you with a mainstage set at Ultra and a few Miami Music Week sets including a special REALM party. Does your preparation process differ at all when you’ve got such an immense swing in crowd-size?

J: Not really! I invest a lot of time into prep work and organizing folders of music. This not only eases my nerves but allows me to weave in and out of house/tech house sub-genres to find tracks quickly.

Codes, you’ll also be heading to Miami Music Week this year to play as well. Are you excited to be making your return? What can fans expect at the Beatz N Eatz party with Golf Clap?

C: Well every year I feel I have to go and top the year before. Last year was crazy and one of my favorite MMWs to date. Beat N Eatz will be entertaining to say the least as leave three days of shows in Miami to fly out and play Spy Bar Chicago Saturday night and heading straight to the airport after my show to make it back to Miami for my 11am after-hours set Sunday at B N E 🙂 Kind of looking at it like my daily super warm shower then blasting as cold as it goes before I get out and start my day. It will be another week for the books!

Since we’ve clearly got all things Miami on our minds right now, what are three essential things that anyone heading to the Sunshine State should bring with them?

J: If we are talking MMW-style, then I say hearing protection, sunscreen, and 5-hour energy drinks.

Finally, because both of you are from cities that dominate the pizza game, give us your best pitch as to why a slice of NYC or Chicago pie tops the competition.

J: I am a lover of all pizza- thick, thin, red sauce, white sauce… no discrimination here. 🙂

C: Love this, as this is a passionate subject but a pretty simple debate. Let me start by saying that Chicago is one of my favorite cities and always a favorite crowd to play for but when we are talking pizza NYC obviously reigns supreme with the best pizza slice. A New York slice is indisputably better from the dough (water duh), the sauce and of course the cheese which should always be on top unless you are making tomato bread soup.

It seems like common sense to me so I never understand how people question this. [Laughs] I will end with a quote from the great Jon Stewart “When I look at your deep-dish f*ckin’ pizza, I don’t know whether to eat it or throw a coin in it and make a wish and if I made a wish, it would be that I’d wish for some real f*ckin’ pizza.” <3

Connect with Codes on Social Media: