After today’s update to the VIRTUAL SELF website, it seems as if a North American Tour is certain to happen in the near future!

Having announced the project back in October of 2017, Porter Robinson’s VIRTUAL SELF has gained some serious momentum while keeping fans stunned along the way. Dropping the debut, self-titled EP along with a first-ever performance last December, the hype surrounding what else was in store only continued to grow.

This year saw a string of shows that took him everywhere from Ultra Music Festival in Miami to EDC Las Vegas, along with performances at Paradiso and more. For those who have been following the news surrounding VIRTUAL SELF non-stop, it seemed almost certain that a tour would be in the works, and today we seem to have been gifted an answer.

Tweeting out the virtualself.life website today, which featured a forum full of posts that contained GPS coordinates that direct to specific venues across North America, it is pretty clear that these will be the stops on an upcoming tour. While the dates have yet to be released, the Porter Robinson/VIRTUAL SELF Crews on Reddit and Discord plugged in the locations and found where these shows are set to take place.

VIRTUAL SELF Tour Locations and Venues:

Here are the original coordinates discovered by the VIRTUAL SELF Reddit and Discord communities:

Aside from the performance at Electric Zoo, we’re still awaiting official confirmation of dates. More details will be added to this post as information continues to surface, and we’ll make sure to keep you updated with the latest news surrounding this tour!

Will you be catching VIRTUAL SELF when he heads to a city near you? Let us know in the comments below! 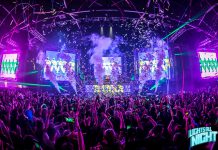