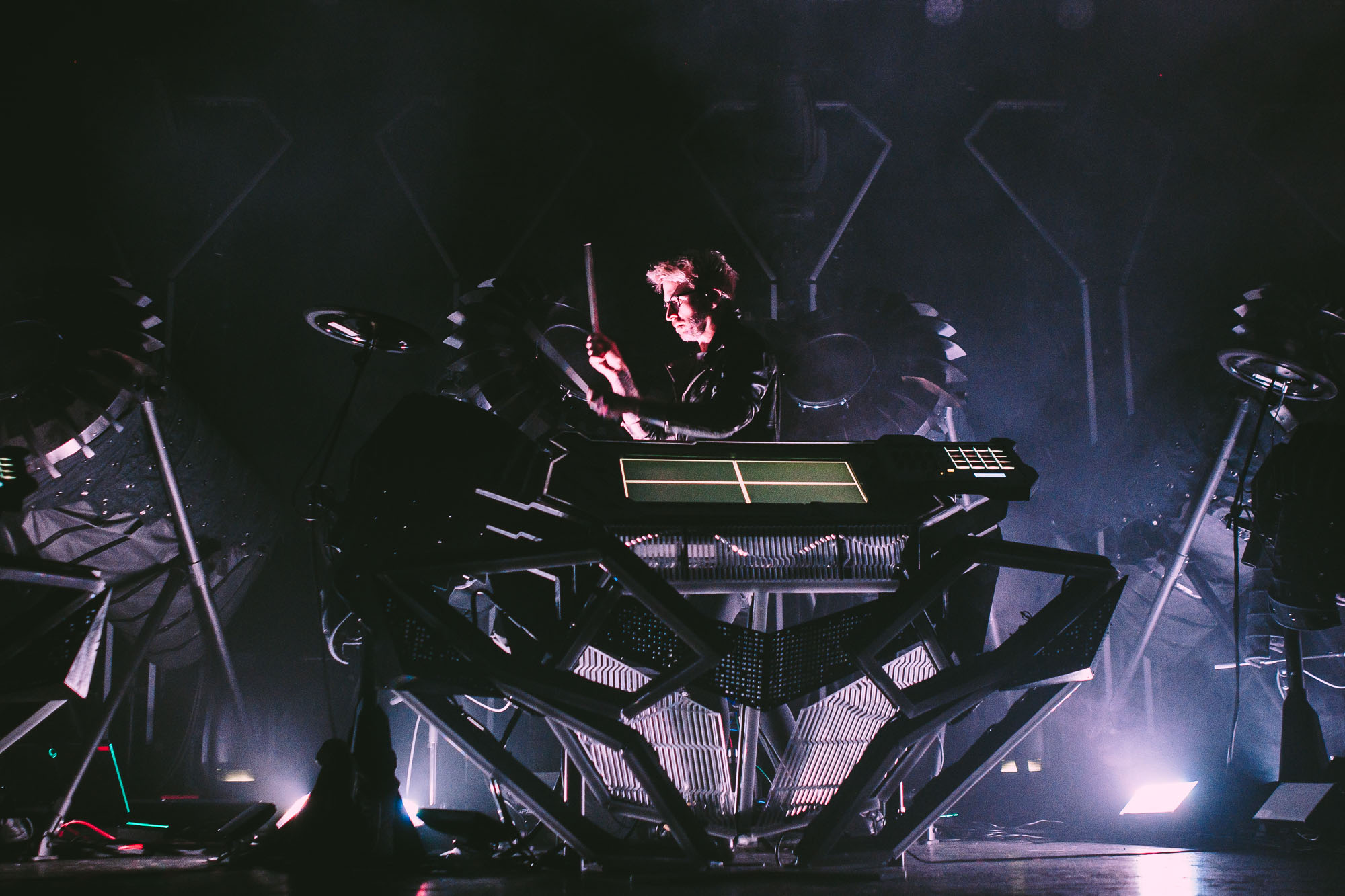 On the See Without Eyes Tour, all the performers incorporated live elements into their night, moving away from the traditional DJ set.

The Glitch Mob returned to center stage after a hiatus with their new album entitled See Without Eyes and we were left impressed. They’ve now embarked on a tour across the country and one of the first stops was in Vancouver at the Commodore Ballroom. Bringing along support from dance pianist Anomalie and Elohim, the night featured a fresh variety of sounds that we won’t soon forget.

This was my first time attending a show at the Commodore Ballroom, but my friend had seen a metal band a few years prior. The venue is a good size, but the dance floor feels fairly small compared to some of the other PNW spaces I’ve visited. However, the tiered seating and tables throughout the venue make up for the smaller dance floor. This creates less of an enticing atmosphere for EDM related events, but for this tour, it was perfect for grabbing a drink to listen to live piano before heading to the dance floor to headbang.

This stop on the tour ended up on an inconvenient Monday, but it allowed for those in the PNW to see The Glitch Mob for those also attending EDC Las Vegas the weekend afterward. As a result, I don’t think the crowd was as lively as it could have been on a weekend, but as always the best vibes are in the back. In addition, there was plenty of room to dance in the back or find seats to take breaks throughout the night.

Each set had a different stage design throughout the night making it an interesting use of the smaller stage space.

The show started right on time with the opener Anomalie who played live piano with funk and groovy vibes. A majority of the set was acoustic with the exception of a live vocal track being played in the background. It can feel quite awkward when vocals are played when the pianist is the only person the stage since the musician isn’t doing the vocals. Overall though, for anyone who is interested in funk music, be sure to check him out.

Elohim was the surprise set of the night with her mysterious nature. She sang multiple songs off her new album while also playing live instruments. The vocals were mixed a little low, but the mysteriousness of the pop artist was so exquisite that it ended up being only a minor issue.

The amount of theatrics she had shown in her hour set brought me back to the early days of Lady Gaga on her Monster Ball tour. There were empowering, positive messages spoken and sung throughout, along with outfit changes and the artist used the stage to her advantage not staying stationary for very long. As an artist on our radar now, she is someone to check out if you’re into pop music and made the price of admission worth it alone.

Nearly four years after I had seen them last, The Glitch Mob finally arrived and played a set that felt, sounded and looked effortless.

Most stage intermissions between sets are fairly boring, but this was not one of them. It was a nice touch from the sound crew to adjust levels for live vocals and setup for the new Blade 2.0, which included testing out the different instruments part of the monstrous machine.

Now if you’re a big fan of The Glitch Mob, the VIP experience of learning how the instruments work would have been worth it because the trio goes in-depth on how it works. However, even if you don’t upgrade, the way the set starts allows you learn how each plays a part to create music when they perform.

The set was split into two parts, with the second half resembling more of an intense journey similar to the Coachella 2014 set when I had seen them last. Once all three of them were on stage, they began with the song that started it all in their rise to fame and continued to rise in intensity for the rest of the night. In addition, the highlight of the night was when Elohim came back out to sing The Glitch Mob’s new track from See Without Eyes titled “I Could Be Anything”.

Since there were no LED panels on the tour, the stage relied on unique diamond shaped pillars that were colorful and went through different patterns.

It made sense since the tour stopped on smaller stages and the live setup with the Blade 2.0 meant that it took up a majority of the space on stage. I do think the lack of LED panels hindered my enjoyment at times because I had held back on looking at the visual journey they released shortly after the album came out with the expectations that I would be able to learn more from it.

Needless to say, after riding the rail for a bit, I decided to take a break and get some water and dance in the back. For the next 30 minutes, I was headbanging, bouncing, and moving to some of the best songs the trio has released since they began back in 2006, including their Tron soundtrack remix and “Skullclub”. The decision to incorporate more live elements that the audience could see meant that there was essentially no bad spot in the room to be and it even encouraged you to move around the space to experience the show in different ways.

The Glitch Mob continues their journey with the See Without Eyes Tour in a city near you, plus experience their visual album on YouTube before you catch them!