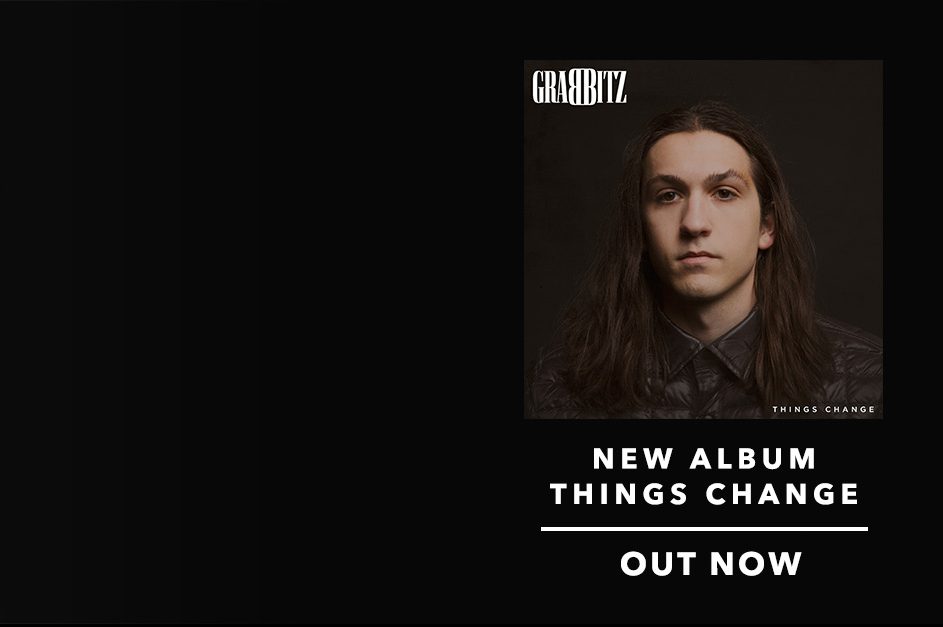 Download or stream Things Change on a variety of platforms HERE!

The artist known as Grabbitz was born in Buffalo, New York as Nick Chiari. This talent musician can play a myriad of instruments such as the piano, cello, violin, and guitar. He signed on with Monstercat in 2014 and debuted with a drum step piece called “Here With You Now” and has worked with deadmau5 and Pegboard Nerds, featured as a vocalist on their tracks. Two years later, Grabbitz has released his first full-length album, Things Change. This album features Grabbitz’s own vocals, lyrics, and song compositions. Grabbitz created an album for listeners to get inside to the soul of an artist, who is not interested in making music for the fame or the money. His songs are not created for mass EDM public consumption but for those looking for something different to listen to.

Things Change feels more like an indie or alternative rock album than an EDM one. Grabbitz’s own solemn voice is featured on almost every song on the album with only some songs featuring an auto-tuned voice. Much of the music on the album would be easier to play in a live show with instruments compared to his previous works such as “Ballin” or “Friends.” His song, “Play This Game” had the most alternative rock sound in the album with its catchy and gritty bassline. Grabbitz has even said that song has “cockiness” sound to it. Grabbitz exhibited his own rap skills towards the second half of the song repeating twice:

I CAN F***** THROW AN ALL NIGHTER
I’M ALMIGHTY, NEW PANTS AND NEW NIKES
A NEW PSYCHE, NEW THERAPIST, YOU’D LIKE HER
I TELL HER I’M A SINGER AND A F****** SONGWRITER

The song itself is an ode to the relationship between an artist and the music industry where the artists “lose themselves” for fame and fortune so long as they adhere to making music that is “cool” or “trending.” However, Grabbitz chooses to play this “game” and aware of how the music industry works. The song becomes more impactful if you view the very visual, colorful music video directed by Nikko Lamere. Grabbitz appeared in the music video at war with himself as to show viewers his struggle to be himself or conform to musician stereotypes.

Watch the official music video for “Play This Game” on YouTube:

The opening song to the album, “Follow Me,” is hybrid of electronic and rock sound. Grabbitz’ s first verse gives the listener a sense of Grabbitz beckoning them to “follow” him by listening to this album. The slow build up in the song for the first 55 seconds generates a major impact for the cinematic chorus that kicks in. A cinematic chorus sound created by the mix of drum beats and the dramatic piano playing in the background.

One of the two instrumental tracks Grabbitz added to the album is called “Pretty Little Melody.” Though the track gives us a glimpse of a Grabbitz track that is devoid of vocals, I felt it did not fit the continuity of the album. Compared to other tracks in the album, it was brief and sounded very underwhelming. Perhaps, the brief track was meant to serve as a transition to tracks 7-12, which do sound different from the previous 6 tracks.

In the next few tracks, Grabbitz decides to play us some Pop-sounding tunes.

Tracks “Love Like That (Let You Down)” and “Hold Steady (Better Days)” remind me of Owl City, catchy, Pop sounds with electronic beats. I liked the guitar solo in “Love Like That (Let You Down), it stood out and I believe Grabbitz played that section himself. It’s moments like that in the album where Grabbitz provides a small personal touch. “Hold Steady (Better Days)” featured Grabbitz singing but I wasn’t of his auto-tuned voice. Towards the end of the song, Grabbitz’s voice gets a little lost in the electronic beats that overtake his vocals.

Getting closer to the end of the album, “Things Change” and “I Shouldn’t Mind” start winding down the album. “Things Change” had a slow sound on the album for me. Much of the song’s focus highlights Grabbitz’s lyrics more than the melody. Grabbitz’s somber singing voice almost fits wrong in the song due to the portions of the sound that sounded more upbeat. “I Shouldn’t Mind” had a lighter sound that echoes a little bit of the 80s with the synth melodies involved.

The second instrumental of the album is “A Tragic Interlude” which starts off with a little light drumming before a cymbal hit that transition to an electric bassline. It felt like “A Tragic Interlude” was a 23-second clip cute from “What I’m Going Thru.” The song could have definitely been left off the album because it doesn’t contribute and just like “Pretty Little Melody” was underwhelming. Adding the instrumentals gave us a taste of Grabbitz doing instrumental work but it feels too random.

The track “What I’m Going Thru” brings the album full circle as we get to hear Grabbitz giving us a little Drum and Bass in the album and synthesized wobble noises. His vocals were my favorite on this track since he didn’t sound consistently the same, unlike the other tracks. Towards the end of the song, he even embellished a little vocally and musically. The vocals end at 3:53 but the song continues and slowly fades off at 4:18. I liked how Grabbitz ended the song at “What I’m Going Thru” to close the album. It felt like the perfect closing song to a solid first album.

As a whole, this album is a solid reflection of Grabbitz as an artist coming out with an album for the first time.

His instrumentals were a miss for me on the album but it gives me hope that he will present us with longer instrumentals in the future. Several of the tracks felt very experimental and there was not a lot of cohesive sounds on the album as a whole. I definitely felt there were three different pieces of Grabbitz in the album. We got to hear his more indie sounds like “I Think That I Might Be Going Crazy” to his more pop-ish songs like “Love Like That (Let You Down).” The success of this album is that it gives me a sense of Grabbitz as an artist and his personality when making music. His point of view is that of an artist that is different from Drum and Bass, Pop, or EDM. Grabbitz reminds us to focus less on the categorizing of music and more of the integrity of music created by an artist. Music that is meant to give us some pause about how music is made today and that different music can be good music.

Things Change is now available to buy on Google Play or iTunes!