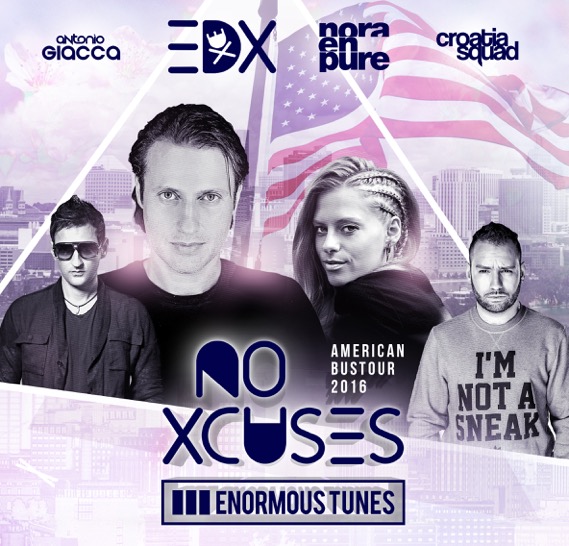 We recently caught up with EDX, who was eager to share the lineup and additional details of his No Xcuses vs. Enormous Tunes Bus Tour, a month long tour bringing Swiss house music to fifteen cities around the United States and Canada starting in February.

With the tour gaining momentum on social media with under a month before the February 19th kickoff show in Washington DC, Enormous Tunes’ own star Nora En Pure has been bringing attention to the tour, and herself, with her consistently impressive hits.  She had a great 2015 – and the hypnotically catchy track “Morning Dew” was the perfect way to close it out.

It is also worth noting that Croatia Squad, who recently had a stellar Bay Area debut performance at Phantasm  San Francisco’s sold-out Halloween soiree, and LA’s future-house favorite Antonio Giacca will be out in full force supporting on the tour with EDX and Nora and they definitely not ones to sleep on either.

Below are the dates for the No Xcuses vs. Enormous Tunes Bus Tour…

the EDM Identity team will definitely be at several of these, tickets here!