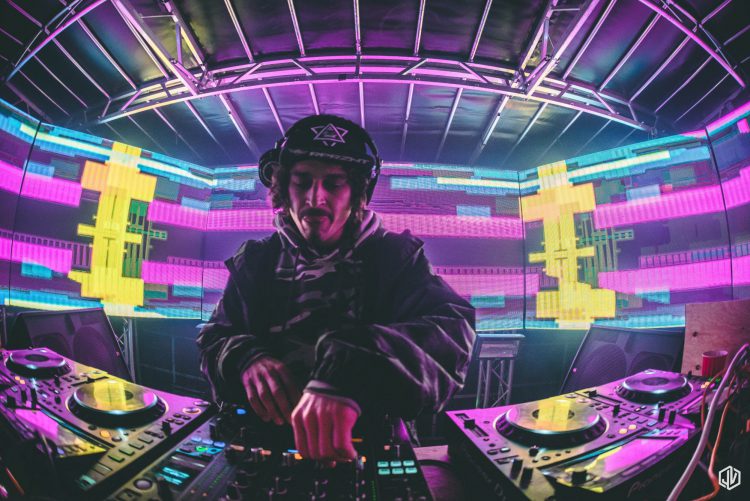 Shlump showcases his “Alien Bass” sound with the second part of Alien Shit, which arrives in the midst of his invasion on the Alien Trip Tour.

Coming from the Bay Area of California, Shlump’s sound has developed over the years through the integration of his signature “Alien Bass” style with classic dubstep elements and the always-changing, unique culture of bass music coming from the West Coast over the last ten years. Making rounds through the country while on tour and on the festival circuit, his now-developed extraterrestrial sounds are reaching fans regularly as he finishes off his headlining “Alien Trip” tour in February.

Today, Shlump returns to WAKAAN with Alien Shit, Pt. II, the sequel to Alien Shit, which was released back in 2015. For this release, it’s clear that his investigations into the sonic mysteries of extraterrestrial realms have coalesced into a four-track EP. The title track off of the EP comes in strong with anthemic stabs, utilizing a familiar “It’s a bird, it’s a plane” sample along with alien commentary to set the stage. The tune itself is reminiscent of more original dubstep rhythms and sounds, passing different reese and frequency-modulated effects back and forth over half-time 140bpm drum patterns, making it a proper flagship track for where Shlump’s style has landed after years of progression in production.

“Strange Signal” was released as a single back in October and brings more hip-hop flavor to the rhythmic swing of the track, also using the opposition of more hollow synth effects with his Alien Bass sound to emphasize the sound design. The single was received well by fans and has been transmitted through sound systems across the country over the last month.

The third tune on the EP gives us a taste of what Shlump and collaborator Ringtone Murder can pull off at 120 BPM. “Get Up” staggers retro house chords through the opening and the outro of the tune to set the stage for listeners. Standard four-on-the-floor drum patterns fill through the buildup until you remember you’re listening to bass music. In the drop, Shlump and Ringtone Murder break it down to halftime and show off their unique alien sound design. Bassy breakbeats at this tempo bring up some joltiness while the quality of production certainly feels futuristic – or accessing alien technology.

Closing out the four-track release is “Transmission,” a collaboration between Shlump and Xotix. This track applies non-traditional rhythmic patterns onto a horn-sounding synth while shredding bass and crisp drums give the funky effect a solid backdrop to dance over. The second half emphasizes a very unique synth that manages to balance full tone, clean sound design, and pitch modulation into a dominating part of the texture without taking up too much of the EQ. Out of all four tracks on the EP, this collaboration stands very well on its own and gives some optimism to seeing more work between these two artists.

Listen to Alien Shit, Pt. II on Spotify or your preferred platform, and stay tuned for more transmissions from Shlump by following him on social media!