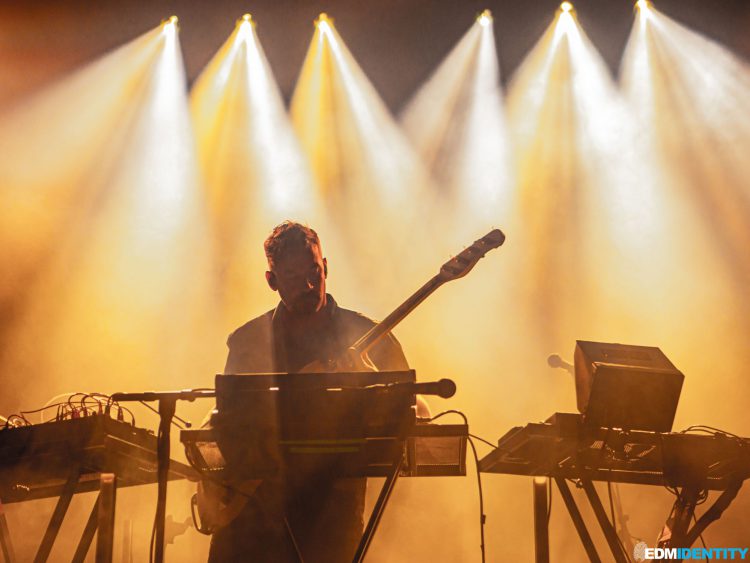 Bonobo brought the Fragments tour across North America and ended with a magical show at The Greek Theatre in Los Angeles!

Acclaimed producer and multi-instrumentalist Bonobo has garnered a worldwide fan base with his ethereal and soothing indie electronic sounds. An established artist in the electronic music world, he has released seven studio albums in his career, including his most recent work, Fragments, which he brought to a number of cities across North America this fall.

Fans were able to experience the album live in cities like Montreal, Brooklyn, Dallas, Phoenix, and Las Vegas, to name a few, before the tour came to its finale in Los Angeles at the iconic Greek Theatre. A spectacular venue to experience the entrancing sounds of Bonobo, fans from all over flocked to The Greek for what was a huge exclamation point to end the tour, and the evening began with opening sets from O’Flynn and Tourist.

O’Flynn warmed up the crowd, gently reeling in the audience with a DJ set full of tranquil tunes, both old and new.

Fellow UK producer O’Flynn joined Bonobo on the latter portion of the Fragments tour and fit perfectly into the evening. The seats of the theatre began to fill up as a light mist also filled the air. The ambiance of the evening was elevated with nature’s touch and complimented the airy and dreamy sounds of O’Flynn’s production. Having just released a new album, Shimmer, O’Flynn expertly weaved songs from his most recent release with songs from his earlier discography.

With a quick 30-minute set, O’Flynn was swift in engaging the crowd and properly got everyone to sway and loosen up. As the mist continued, some attendees sought shelter at the concessions while others welcomed it; however, even if you did take shelter, visibility from the side was still a great show. Not to mention, seeing the production and lights from that perspective was marvelous because you could see the lights from the stage cut through the light rain and illuminate the droplets.

The show continued as Tourist took the stage behind the decks drawing the audience deeper into a transcendent experience.

Another perfect booking for the evening, Grammy award-winning producer Tourist continued to grow the energy with his upbeat and cinematic sounds. It was easy to get lost in the music as he played through tracks from his albums U, Wild, and his most recent release, Inside Out. As I enjoyed the show from my seat near the top of the theatre, I had a clear view of everything and watched as the crowd thickened. The venue is mostly seated, but everyone was on their feet dancing for Tourist who ensured everyone was ready for Bonobo’s performance. One of the highlights from Tourist’s set was when he played “Run.”

A beautiful journey of a song “Run” is a track that sent me down the rabbit hole of Tourist’s music, and it was an incredible experience to see it live for the first time. Especially at a venue such as The Greek. As Tourist’s set came to an end, I made my way to the pit to capture photos of Bonobo’s set and get a closer look into the experience that was to unfold.

Bonobo took center stage and was joined by a full ensemble of talented musicians, including a drummer, guitarist, string section, wind instruments, horns, and guest vocalists.

Leading the ensemble, Bonobo commanded the stage from the very first note as he switched between playing keys and bass. The rest of the musicians added their respective bravado to create a polished and practiced performance. The light rain had subsided, seats were full, and the enchanting echoes of Bonobo’s productions emanated from the speakers filling the entire theatre with wondrous energy.

As most of Bonobo’s tracks are led by instrumentals, the set seamlessly flowed from song to song, allowing the audience to drift into a state of pure bliss; however, the performance was elevated with the addition of the guest vocalist who performed a handful of tracks alongside Bonobo.

With a beautiful, disarming voice and adorned in a macrame-like dress, each song that she joined brought a whole new dynamic to the performance. One of the highlights from Bonobo’s set was when they played “No Reason.” Originally produced with Nick Murphy’s vocals, the guest vocalist brought her vibrant take to the piece leaving everyone euphoric. Of course, Fragments tracks made up most of the setlist and included tracks like “Closer,” “Age Of Phase,” “Polyghost,” and crowd favorites “Shadows” and “Rosewood.” All of which translated tenfold from studio to live setting brought to life by a group of musicians oozing with talent.

As the show neared its conclusion, Bonobo worked in tracks from his earlier discography, like “Cirrus,” which rounded out the set beautifully.

After exiting the stage, Bonobo and the band obliged fans’ cheers and performed a multiple-song encore that was accompanied by a gleaming disco ball and an epic finale of production. When the set came to an end, there was a feeling of rejuvenation and happiness gleaming from the crowd’s demeanor. Bonobo and the band took a final bow, and the Fragments fall tour came to its conclusion. As I walked out of the venue, I could not help but feel overjoyed. I solidified the memory by purchasing a signed vinyl from the merch tent. Now, whenever I listen to the album, I can transport myself back to this magical show at The Greek.