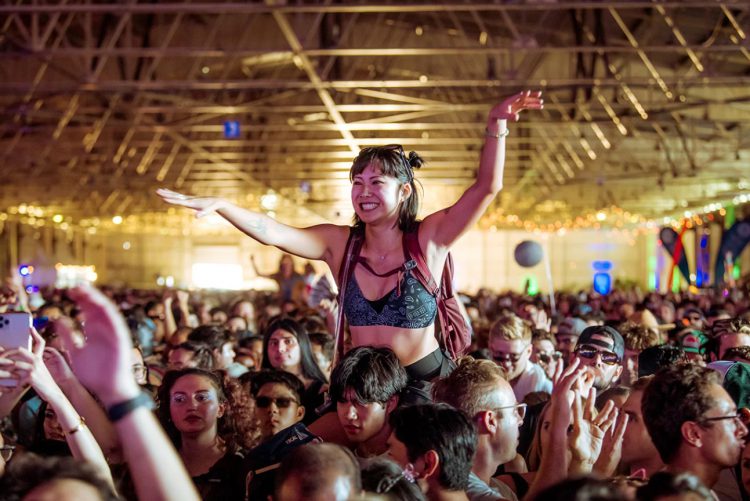 The music and the crowd at Portola Festival were sensational, but what seemed to be missing was the soul that makes house music what it is.

I sat alone on the city bus headed towards Pier 80 and listened to the gossip. As the driver careened down Third Street, his passengers speculated about Portola Festival. It was the first day of the music festival’s inaugural year, and no one knew what to expect.

As a longtime rave kid turned music journalist–i.e., “professional” rave kid–I’ve experienced my fair share of festivals. After a while, the American circulation becomes a bit stale. I rarely saw artists for the first time, and I was tired of hearing everyone boast about the number of times they’ve seen their favorite act. But Portola Festival seemed different.

Goldenvoice seemed to hit all the right markets with the lineup for Portola. House enthusiasts would love Peggy Gou and Fred again.. and the fierce party-poppers could flex with Charli XCX and ShyGirl. And perhaps most enticing to me, the “old souls” could finally witness legacy acts Fatboy Slim, DJ Shadow, and The Chemical Brothers.

It was an openly indulgent showcase on par with Goldenvoice’s other notable production, Coachella. Conversely, the granulated event branding and bare, gravel lot venue at Pier 80 made it feel welcoming to lo-fi, uber-cool house kids. Overall, the music and the crowd at Portola were sensational. What seemed to be missing, however, was the soul and grit that made me fall in love with house music in the first place.

When I first walked up to the main stage at Portola, I first noticed the obtrusive (and mainly empty) VIP section.

Those doomed to GA had to walk halfway around the stage to get to their designated space on the blue AstroTurf. This would become a theme at Portola – ostentatious VIP sections that would ultimately hinder most of the crowd. Bitterness aside, the Pier stage had an excellent sound system and ample space to dance. From the front row during Gioli & Assia on day one to The Chemical Brothers’ closing set on Sunday, I could always find some wiggle room and a good dance crew to join at the Pier Stage.

The two tented stages to the side of the Pier (helpfully named the Crane and the Ship Tent, designated by their respective looming structures behind them) housed most of the heavy-hitting house acts for the weekend. Their laser displays were on-par with some of the best clubs in the world and blew the crowd away… if you could even make it into the tent. Saturday’s closing lineup of Hot Since 82, followed by Fatboy Slim, followed by Gorgon City, had me dancing until I felt I might collapse. The crowd spilled out to the neighboring picnic tables and bathroom areas during Peggy Gou’s highly anticipated set on Sunday night. Nonetheless, the sound system carried well, so we all danced wherever we could.

By far, the biggest disappointment of the weekend was The Warehouse stage.

In some asinine decision-making moment, only two entrances were open to the massive warehouse, despite over 20 available garage doors. This proved disastrous on Saturday afternoon. When fans migrated towards The Warehouse to catch the second half of Fred again..’s set, security blocked them off from the stage. No one was allowed in for “crowd control purposes.”

I understand that no one wants another Astroworld, and I’ve admittedly never been in charge of 100,000 people at once. Still, something makes me think that if you opened more entrances and exits, then the need for overbearing crowd control sharply falls. But they have to keep one entry separate just for VIPs, naturally.

I was so turned off by the Warehouse fiasco that I only made it in there for Duke Dumont’s Sunday night set. Once I broke free of the barricaded maze into the entrance, I honestly laughed at how huge the space was. It made the babysitting happening outside seem that much more ridiculous. There were display screens around the hall, which was nifty, but the sound system was awful. Too much bass washed everything out, and though I could inch reasonably close to the stage, friends told me that if you got stuck towards the back, you couldn’t hear a thing. I didn’t return to The Warehouse.

Logistical hiccups aside (it was their first year, after all), Portola Festival featured some of the best performances I’d ever seen.

Kaytranada’s rainbow-drenched electro-soul was infectiously funky. DJ Shadow effortlessly flipped and scratched his way from drum and bass to hip hop and even some ambient. The music was great. The crowd was fantastic. Goldenvoice unsurprisingly pulled off a majorly successful festival.

For next year, my only hope is that Portola brings a bit more heart and a little less exclusivity to the festival. If you’re going to market your event as a grungey warehouse rave, then maybe leave some of the bougie vibes at Coachella.