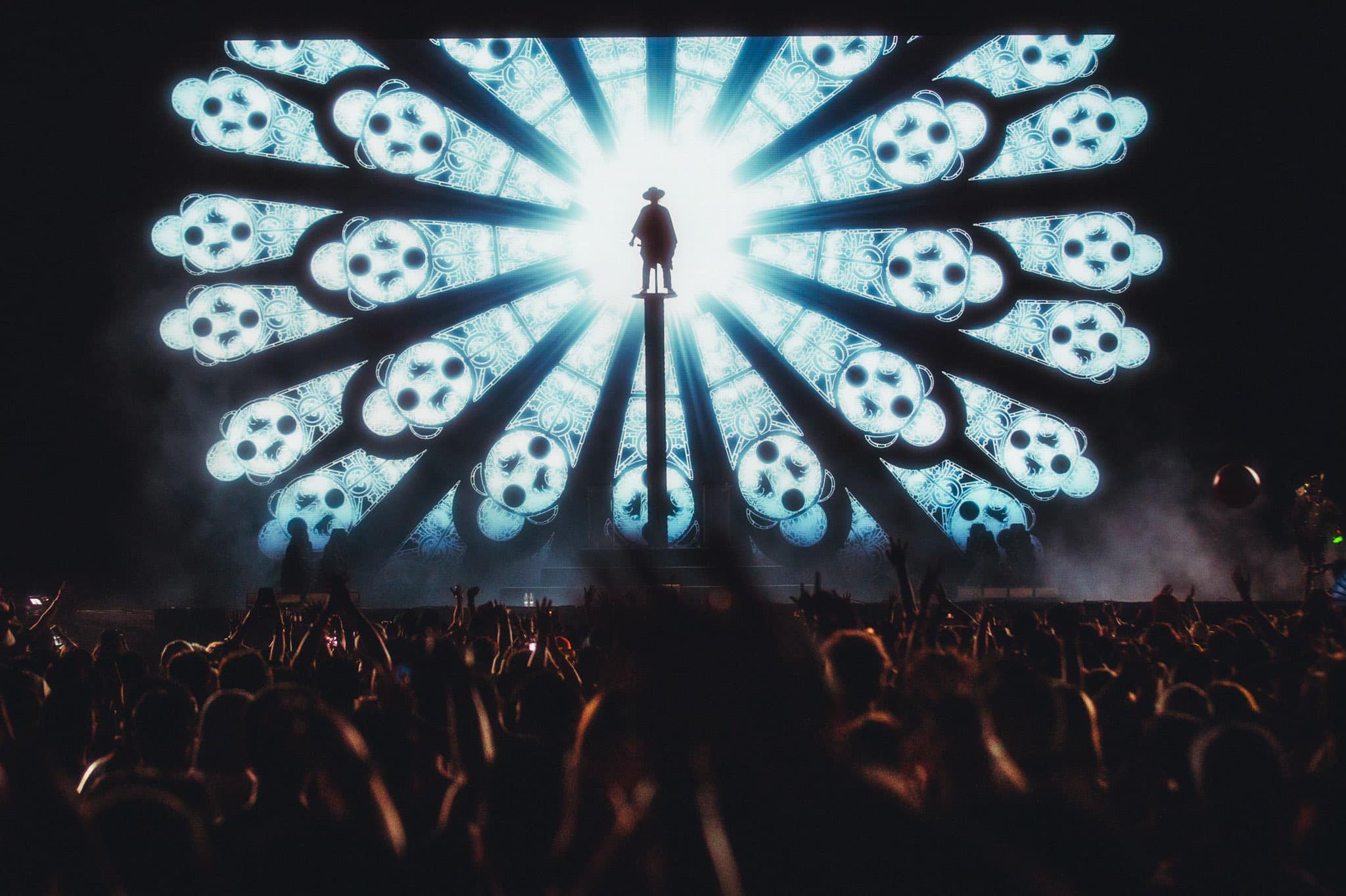 Learn more as we dive into Madeon’s illusive storytelling, which weaves throughout his music, visual representations, and live shows.

Following the release of his 2019 album Good Faith and its accompanying tour, Madeon came back better than ever and doubled down with his Good Faith Forever shows, which first premiered at Second Sky in 2021. Partnering with The Architects, they took the best parts of the original show and enhanced them, adding whole new sequences.

With a focus on how his silhouette interacted with the visuals, the team fine-tuned the show, even making show-specific adjustments. Whether that was turning up the color saturation for Coachella’s second weekend or expanding the visuals to fit the massive screens at Brooklyn Mirage, there was thought put into every show.

If you’ve ever been to a Good Faith Forever set, you’ve likely been captivated by the production – the dynamic, technicolor imagery casting Madeon in silhouette, his mic stand, tables, and platform that also light up with the full spectrum, his outfits that become a part of the visuals, and even his movements that bring the story to life. Every time I see Madeon live, I find myself trying to understand the storyline and wondering about the deeper meaning as vibrant visuals flash across the screen. It’s hard not to be in complete awe.

You may also notice characters that make several appearances throughout. You’ll see Madeon change outfits a handful of times, eventually donning a glittering cape with gloves, and a wide-brimmed hat to match. But perhaps the most prominent element you’ll see are words and typography – some in plain English, others in the mysterious Imperial Alphabet created by Madeon himself.

We wanted to understand more about the messages being shown and the story within the set.

Thanks to some devoted fans and our interview with him last year, we were able to put the pieces together. Starting with the Imperial Alphabet, which originated a decade ago with Madeon’s first single, “Icarus.” This “custom design cipher language” has been used throughout his music videos and album art, and is also prominent in the Good Faith Forever visuals.

Oftentimes the Alphabet spells out lyrics within the current song, or song titles will flash letter-by-letter in the cipher as they do in “Imperium.” But other times, they display secret messages repeatedly. Here’s an example of a message found during “Imperium,” “You’re On,” and “La Lune” that is speculated to be correlated to Good Faith’s overarching theme of joy:

In other sections, the Alphabet introduces characters such as the Imperials and F – we’ll get to them in a second.

During “The Prince,” a throne and backdrop are covered in the language with the message:

The use of the Imperial Alphabet serves not only to create a unique visual experience but to carry the more hidden storylines between songs and each character. It also helps create cohesiveness throughout the show. The Alphabet was decoded a while ago but still has fans excitedly deciphering each new message that Madeon creates.

Throughout the Good Faith lore are characters upon which the story rests.

Firstly, we have Madeon himself, who takes on the main character and presumably the role of the Prince. Then there are the Imperials – ominous, masked, and hooded figures who appear throughout the show, especially during darker parts of the set. The Imperials are represented by individual letters; the two main are referred to as R (female) and K (male).

Dischead is the Good Faith god that the Imperials follow. He is depicted as a robed figure, carrying a staff with beams of blinding light radiating from his head. Lastly, there is Borealis or the Queen, formerly known as F, who during “The Prince” dons a crown and grants Madeon superpowers. This allows him to clone himself and exert power over the show.

“This crown is a way to explain that the Queen character is not a god but is rather trying to look like one in the way that kings and queens in ancient times would wear clothing that would make them resemble divinity rather than humans,” Madeon explained. “In a way, it is an admission of their humanity.”

The thoughtfulness behind every element of Good Faith Forever’s lore shows the genius of Madeon.

It is one thing to dazzle audiences with bright, flashing visuals, but it’s a completely different plane to interweave a complex language system and archetypal characters. At the end of the show during “Shelter,” visuals from each of the previous tracks cycle through in quick succession, putting a nice bow on the journey you’ve just taken through the Good Faith universe.

If you’re interested in learning more, we recommend checking out this Good Faith Timeline and the visual transcript compiled by Madeon’s fan community and also diving into Reddit. There is so much more to explore within this world for those who want to dive deeper.