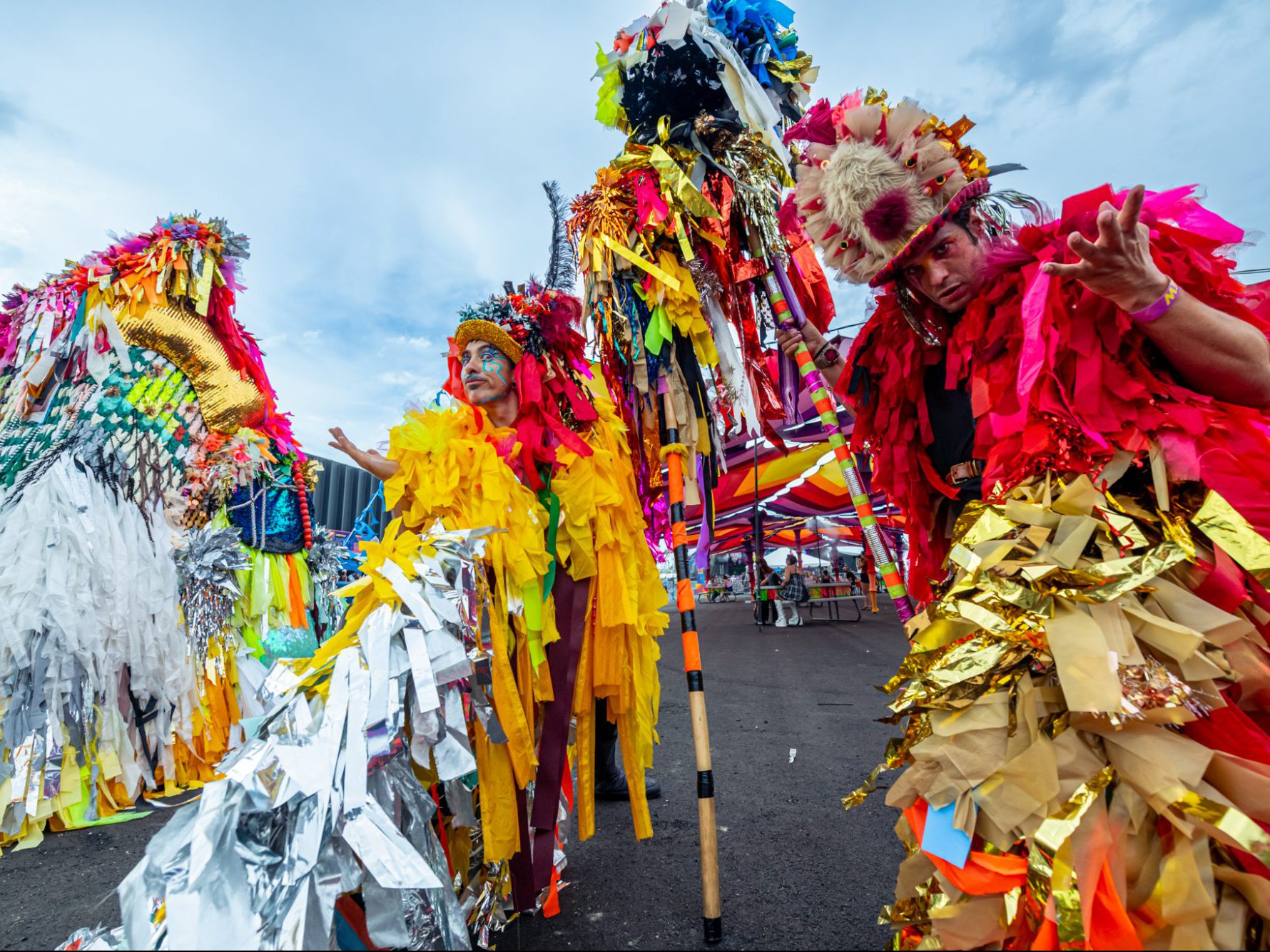 Meow Wolf took us into the Vortex with out-of-this-world music and art installations at the first edition of the festival in Denver.

Meow Wolf has become renowned for its impressive art installations that are immersive at their core, but there’s another bubbling side of these creatives on the music front as well. Their venues have hosted some impressive events over the past few years and the most recent addition arrived this summer in the form of Vortex Music Festival in Denver.

As Vortex made its debut in the Mile High City, it welcomed attendees with plenty of vibrancy at its secluded industrial venue, The JunkYard. Sandwiched between the freeway and the train tracks lay the quirks and curiosities of all Meow Wolf has to offer. With an array of music genres spanning its three days, Meow Wolf brought its oddities, fashion, food, and local vendors to add to the magic of the weekend. Of course, their colorful art installations were present as well.

The crowd was just as colorful as the festival itself. There was a sea of smiling faces from those dancing on the asphalt as Vortex brought all walks of life together just to enjoy the music and art. The festival’s performers brought Meow Wolf to life as they roamed the grounds and danced among the crowd in intricate costumes straight out of your imagination.

I started Friday off a bit late but spent some time walking the grounds and getting acclimated with my surroundings, checking out the art, and enjoying the music.

I was stunned when I first walked into the venue and quickly began to find myself immersed in the ambiance of Vortex. Exploring The JunkYard was a treat as I got my grip on the layout and a taste of the vendors that were there. It was getting pretty late, and the music was roaring from the ARĀ, making me realize that Duke Dumont was about to play.

Running over to his set, it was clear from the jump that Duke Dumont had control of the crowd. The stage offered its own personality with clear stacked boxes vibrant with color and foliage. He had people shuffling and dancing to his house tunes, and as one of the artists I was most stoked to see over the weekend, I was not disappointed with his set in the slightest. His visuals and lights lit up the night sky as the pounding bass shook the ground.

Unfortunately, Duke Dumont’s set was at the same time as Toro y Moi.

As I walked over to the ATRIĀ stage to catch Toro y Moi, I stopped by the multiple vendors who were selling quite an array of handmade items, and others were selling LED Hoop and other festival equipment. The coolest vendor by far was Brie Hirsh‘s Franken Bois, which she hand-sewn hybrid animals which were totally customized to her customers.

After stopping by the vendors, I finally made it over to Toro y Moi’s set for the last 15 minutes of the evening. He brought an undeniable grooviness to the massive stage decorated with what looked like falling rain drops. It was the perfect way to end the first night.

On Saturday, I made my way to the venue a bit earlier, grabbing a slice of pizza from one of the food vendors, as well as one of the colorful flavored lemonades they offered.

I sat down at one of the tents to enjoy my food and loved the performers that danced around the grounds. One of the artists on the lineup that was new to me was Sad Night Dynamite, and the duo brought a kind of a slowed-down hip hop set to the afternoon as the rain slowly began. By the time Bladee came on, it was absolutely pouring, and lightning struck overhead, but that didn’t stop people from splashing through the puddles and enjoying themselves through a captivating set.

After catching the very end of Avalon Emerson, Dixon took the stage and was one of my favorite sets of the weekend. You could see the raindrops dancing in the puddles to his ground-shaking bass. Prior to leaving for the venue, I stopped by to catch some of 100 Gecs to bring my night to a close. They were, without a doubt, one of the most peculiar sets over the weekend, with their colorful hyper pop sound.

The third day arrived, and the rain did not subside in the least, but it made the weekend all that much more magical.

I arrived at the venue in the midst of the downpour, and people were running around soaking wet. That didn’t stop them from enjoying the music and one another, though. I met up with some friends for a quick hello, and we caught a bit of Chris Stussy, who put on such a fun performance that you couldn’t help but dance despite the heavy rainfall and crashing thunder.

Soon after, I made my way over to Bob Moses, who I was excited to see live after years of waiting to catch them. With the pouring rain and their incredible stage setting, their set felt surreal as their lighting showed out on the faces glistening with rain drops. Their soaring melodies surrounded our ears as the audience sang along to every word. Bob Moses was the perfect act to close out the festival with their stunning electronic, soulful soundscapes.

Each day of the festival brought a new and exciting experience, making this one of the most unique music festivals in Colorado. I hope that Vortex will find its annual home in Denver each year and can’t wait to see how Meow Wolf will grow and expand the experience through the music and art they bring with them.