Camp EDC Proved It Could Be Its Own Festival 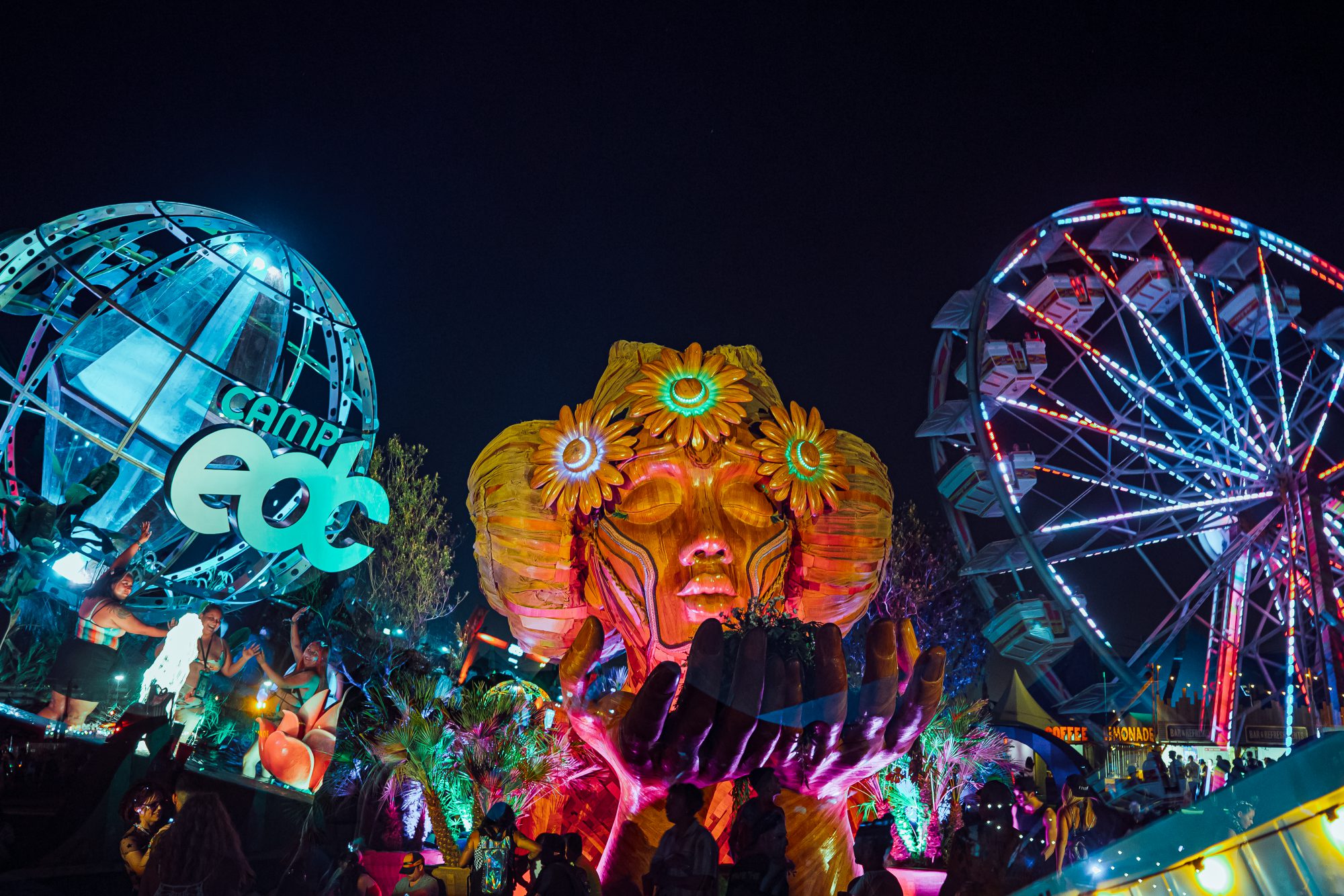 This year’s edition of Camp EDC at EDC Las Vegas offered unique experiences and great music that could have made it a standalone festival.

Ever since Insomniac added the Camp EDC experience to EDC Las Vegas back in 2018, it’s only continued to get better with each passing year. Nestled on the North Side of the Las Vegas Motor Speedway, the paved parking lot is transformed into a home away from home for headliners filled with activities, amenities, and exclusive sets that could justify it being a standalone festival on its own.

Much akin to previous years, our group opted for RV Camping and made sure to arrive early on Thursday morning so that we could land a great spot and get ready for the kick-off party later that night. We pulled up through the RV security checkpoint and were parked in our spot in less than an hour. Once we had gotten settled, unpacked, and hooked up to the power, we ventured deeper into the campgrounds to see what else Camp EDC had to offer.

The layout of The Mesa remained the same from last year’s edition. Familiar sights like the Bamboo Stage, the Ferris Wheel, and the massive shade structures that hosted workshops and activities were present. The tea and juice pavilion and its sandy beach welcomed those coming in from the Sapphire lot entrance, and there were also shade structures throughout The Mesa by the food vendors.

Related: Check out our top moments from this year’s edition of EDC Las Vegas and dive deeper into the wasteLAND stage.

There were some new modifications to The Mesa and Camp EDC as a whole this year.

One of the biggest additions was more pools by the It’s Kraken stage so that more Headliners could attend the parties each day. The added pools were a blessing in disguise due to some accidents causing a few to be closed at different times throughout the weekend. Day Trip and Insomniac Records took control of the stage next to the pools on Friday and Sunday, while Bassrush brought some serious wubs on Saturday. There was no better way to beat the heat than at these parties as tunes boomed from its speakers each day from 1pm – 5pm with artists like Cloonee, Riot Ten, FuntCase, Matroda, Shiba San, and LP Giobbi playing special sets.

Another significant change was the inclusion of the Turquoise Lot.

Those looking to stay in a quiet area and avoid the madness of The Mesa will love this lot but be aware that it’s quite a trek to get to the center hub – so make sure you bring your bike if you can to save your legs a bit. Additionally, the members of Camp OG made their presence known toward the festival’s entrance with a row of sound camps that were playing everything from classic rave tunes to drum and bass. It was a great place to visit if you wanted to get some different sounds than what was playing elsewhere.

Camp EDC also featured a Gopuff center that sold a variety of snacks and other items. It was right next to the Insomniac Merchandise booth that offered much of the same merch as inside the festival but also included specialized Camp EDC merch. Much like their activation inside EDC Las Vegas itself, those who wanted to chill in their ShiftPod or RV’s Ac could even get their items delivered directly to them if they ordered through the mobile app.

The Bamboo Stage was packed on Thursday night for the Kickoff Party and provided a home for those who kept going each morning.

On Thursday night, taking over the decks were Deeper Purpose, Yolanda Be Cool, CID, and FISHER. As Headliners trickled into Camp EDC, the Bamboo stage got more packed, almost making it feel as if you were at a stage inside EDC Las Vegas itself. The Mesa swelled with activity as friends reconnected, grabbed food and drinks, and danced away until the tunes stopped at 3am.

This stage would also come to life at 5am each morning after EDC Las Vegas. ADIN and Claptone played an epic set on Saturday morning, while Sunday morning featured John Summit and Lee Foss along with Joshwa to keep the bender vibes high from those who hadn’t gotten their fill the night before. And the entire weekend was capped off by a monumental performance from one of the scene’s fastest rising artists, Vintage Culture, who had everyone grooving along with him throughout his open-to-close set.

That wasn’t all that was in store for those staying at Camp EDC this year, as there was plenty to do outside of the pool parties.

There were many activities hosted in the Sol Orange, Tierra Green, and Cascada Blue shade structures. Fan favorites like goat yoga returned, while other workshops centered on meditation, shuffling, and more also took place throughout the day. Those looking to get body marbling done or even get their hair styled had the options, and these areas also provided a cool place to chill during the heat of the day.

This year, just beyond the pool were carnival games such as the classic ring toss, with stuffed animals and assorted prizes. Two of my friends won a small dog and an oversized pig in a blanket through shooting hoops. While it didn’t ever seem overly packed line-wise, based on the number of people walking around with stuffed animals, it was clear that these games were busy all weekend long. And you can’t forget about the roller rink offered its sound system and disco balls overhead for a completely retro feel.

The variety of food was wide and felt even broader than in past years. Typical festival offerings like chicken tenders, pizza, rice bowls, and tacos, but some of the standouts included the stacked grilled cheeses and the agua frescas, smoothies, and ice cream. Some of the stands were more popular than others, and going at peak times to eat meant a bit of a wait, but there were plenty of places to choose from.

This year’s vendor village also expanded with more shade and fans while you shopped. Vendors selling holographic art, pashmina, custom clothing, flags, candy, and even a booth raffling off a speaker system were present. Many offered custom orders that could be delivered after the festival wouldn’t have to worry about hauling it with you.

Each edition of Camp EDC has seen some hiccups, but this year’s issues were fairly minor in the grand scheme of things.

Those planning their trip to Camp EDC in the future should know that the AC units inside the tents do tend to struggle during the hottest hours of the day. There was also a bit of a miscommunication for some RV campers who arrived later on Thursday night which led them to need to relocate the following day. And yes, a few pools were closed at different times, and someone decided to destroy every toilet seat in the bathrooms for some reason or another. Yet compared to previous editions where the water ran out for showers, there weren’t enough porta-potties, or the power went out multiple times – these were all minor in comparison.

When you’re at Camp EDC, you feel like you’re at a standalone festival.

Camp EDC could be its own festival without EDC Las Vegas connected to it, and it would be well worth the cost. Insomniac ensures that there is never a dull moment for anyone staying on-site. From the sheer volume of people staying there for the weekend and the large expanse of The Mesa to the seemingly non-stop music and fun amenities offered, it felt like you were living in a separate world.

We’ve said in the past that Camp EDC is the best way to experience EDC Las Vegas, and that remains true, especially after this year. Will we see you there in 2023? Stay tuned for more details on the upcoming edition.