Adventure Club sat down with us at EDC Las Vegas to chat about the Death Or Glory Tour, staying healthy while on the road, and their new track with Said The Sky.

Hailing from Montreal, Canada, the dynamic duo Christian Srigley and Leighton James have dominated the electronic music scene since their arrival. Better known as Adventure Club, their discography ranges from classic tracks like “Crash 2.0” and “Gold” (feat. Yuna) to newer favorites like “Next Life” which features Crankdat and Krewella.

Fresh off their monstrous Death or Glory Tour that saw Adventure Club take the stage everywhere from Los Angeles and San Jose to Washington DC and Philadelphia, these kings of all things bass made an appropriate stop at EDC Las Vegas last month. Taking over the iconic bassPOD stage for one of their biggest sets yet, Adventure Club blew the roof off and even dropped some fresh tunes for their biggest fans to get down to.

Before their set, Adventure Club took the time to sit down and chat with us about their recent tour, the pressing topic of mental health, and their daily Planet Fitness workout routine. Check out their EDCLV recap video below and read on for the full interview!

It’s been a few years since our last time at EDC Las Vegas, but this round was nothing short of magical. The bassPOD was PACKED! 🔥 Thank you for always having our backs, showing love, and making yet another show so special for us. Check out the recap 🖤
🎥: @guerillamcgavin pic.twitter.com/hk430E9bXV

Hey guys, thanks for taking the time to chat with us. How does it feel to be back at EDC and playing the bassPOD stage?

Christian: Well, we were just saying that bassPOD looks insane this year. The stage just looks so good, we’re super excited to get out there. What was the last year we played here?

Leighton: 2016, we played a different stage though.

Yeah, last time it was circuitGROUNDS.

C: I remember the production with the pillars. Yeah, the production out here… every single stage is just mind-blowing. It’s an amazing time out here. There’s just so much energy put into those stages and all that production like yeah. We just came off our tour and we were so proud of the production we managed to be able to bring with us. Antics were the guys that we were with, they did such an amazing job. We had a really cool rig that we were running with them but we had one bus and that’s all you can bring. EDC Las Vegas allows us to play on just that bigger platform and it’s just really cool to get on these massive productions.

So speaking of your tour, you just wrapped up the Death or Glory Tour which took you across the US over three months…

C: We did the math, I think we drove enough on the bus to actually drive around the world.

Wow, that’s a lot of driving. Do you have a favorite moment from the tour that stands out?

C: I had a really special time. The last day of the tour is pretty special, you’re wrapping everything up and saying bye to new friends.

C: Leighton’s mom, who’s basically my second mom, she made it out to the show and it was a pretty emotional time. We all got tattoos that day, a little representation of the stage that we brought with us, so it was really special.

So as artists who have been on the often, what are the best and worst parts about touring?

L: I can tell you the worst part right off the bat. Trying to get a routine staying healthy.

L: We’re pretty good but it was still awful.

C: You know, you try to keep up with the gym and then you’re going on on the road and it’s 100 times harder. You just have to get that consistent routine.

L: This tour was actually pretty good. Every time we would wake up it was me, Christian, and Wooli, we would go to Planet Fitness to work out in the morning. Then after the show, your tour manager brings in like three pizzas and you can’t eat it.

C: I didn’t have a single slice of pizza that entire tour. Okay, so the other worst with the bus tours, because if you’re flying it’s a different story, but the bus tours it’s the immune system and the germs. You put 12 people on one bus with recycled air and the minute one person brings in anything everyone gets it.

C: I do now, which is why I’m not eating the pizza. It’s not about the calories or anything, I have certain intolerances, so if I avoid eating things I shouldn’t be eating then my immune system is amazing. If I eat these things, I get sick. But we all got sick on the bus.

On the topic of staying healthy, let’s talk about mental health for a second. Over the past few years, the conversation about artists keeping mentally fit has picked up some momentum. How have you fought these battles and do you have any advice for anybody who might need help?

C: That’s a Christian question. When we finished the tour, I had gone on social media and made a small, little post about that. I’ve had the mental health struggles my whole life, but I hadn’t really been public at all about it. It’s very recent that I am just willing to talk about it. But the struggles for an artist, they’re the same as everyone else’s. If your brain doesn’t like where it’s at and does bad things, it’s going to make anything look bad. So it doesn’t matter what circumstances you’re in, it’s just gonna work against you.

I think the best thing you could do is to embrace the support system that you have. It’s easy to push people away who are trying to help you, it’s easy to put negative spins on things and make it seem like people aren’t there for the right reasons. But you gotta identify the fact that it might be your mind working against you. So if you embrace the support and the love that you have and you’re open about it, I haven’t been open about it for very long, but I know that being open about it helps immensely.

So be open about it, open yourself a little bit, accept the help that that that people are willing to give you and I think that goes a long way. Leighton has saved my life many times, he’s a good one. So the tour was a tough one for me, but I got through it.

Thanks for talking about that. Switching gears to some new music, you guys also recently worked on a track with Said The Sky, we know that you debuted it last night at Red Rocks. So tell us about it. How did that track come about?

C: We worked with Sarah Diamond before on “Firestorm” and ended up writing that vocal with her. I think we were just trying to find the right space for that vocal and we couldn’t find the right space. Then we got together with Trevor and at that point started collaborating. It just made sense and that vocal just finally found its home, so that’s really cool.

And I mean, Trevor is just… last night was my first chance to watch him perform start to finish. I don’t like going into the crowd and all that stuff but Red Rocks has a little TV. I got to watch the Trevor show and man he puts on such an amazing performance and the energy he puts in. I know he’s got all kinds of live instrumentation and stuff. He’s really inspiring. So being able to work with him, being able to see him in action, and then being able to drop the song with them that night, it was very, very special.

So when you’re not producing music, who are some of the artists that you’re listening to?

C: I’m bad on my playlists I’m so dated. I’m bumping my Vietnam War-era music playlist that I put together. It’s fire. Track number one just to give you an idea is “Fortunate Son” by Creedence Clearwater Revival.

You’ve got that Good Morning Vietnam vibe going on.

C: Yeah, exactly. Which isn’t very helpful, because I feel like everyone already knows about that stuff. was cool. You’re listening to it now. So though?

C: He’s at the cutting edge and I’m way behind. I’m listening to like Chopin and 200-year-old music and Leighton’s at the forefront.

L: I love Warped Tour era music. That emo kid in me will never leave. I listen to artists like Bring Me The Horizon, Oliver Tree, BTS, stuff like that.

Sweet. Finally with the rest of the year still in front of us, what is in store for Adventure Club?

C: We just wrapped up our tour so we’re back in the studio. It’s a lot easier to write when you’re not touring, especially when you’re on the bus. You know, I see some people on the bus and they’re just like, head down headphones on just killing it. But we just don’t really function that way, I need space. So we were chomping at the bit to get in the studio and work on music and put energy into that. But we have.

L: We do have our releases lined up. We’ve actually publicly announced it so we can tell you what’s going to be coming up. The release was Said The Sky, then we have the release with QUIX, and one of our favorite singers, Craig Owens, who’s now known as badXchannels but is from Chiodos. After that, we have a nostalgic release with Yuna. There’s a lot of music we’re releasing.

C: There’s a lot of stuff lined up and we’re super excited to start working again. We’ve got a lot of energy to put into the studio, so I think you can expect a large volume of music to be coming out. A lot of shows, a lot of music, a lot of stuff.

Alright, well, that’s all we got for thanks for chatting with us! 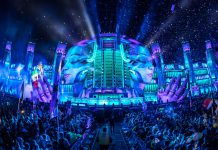