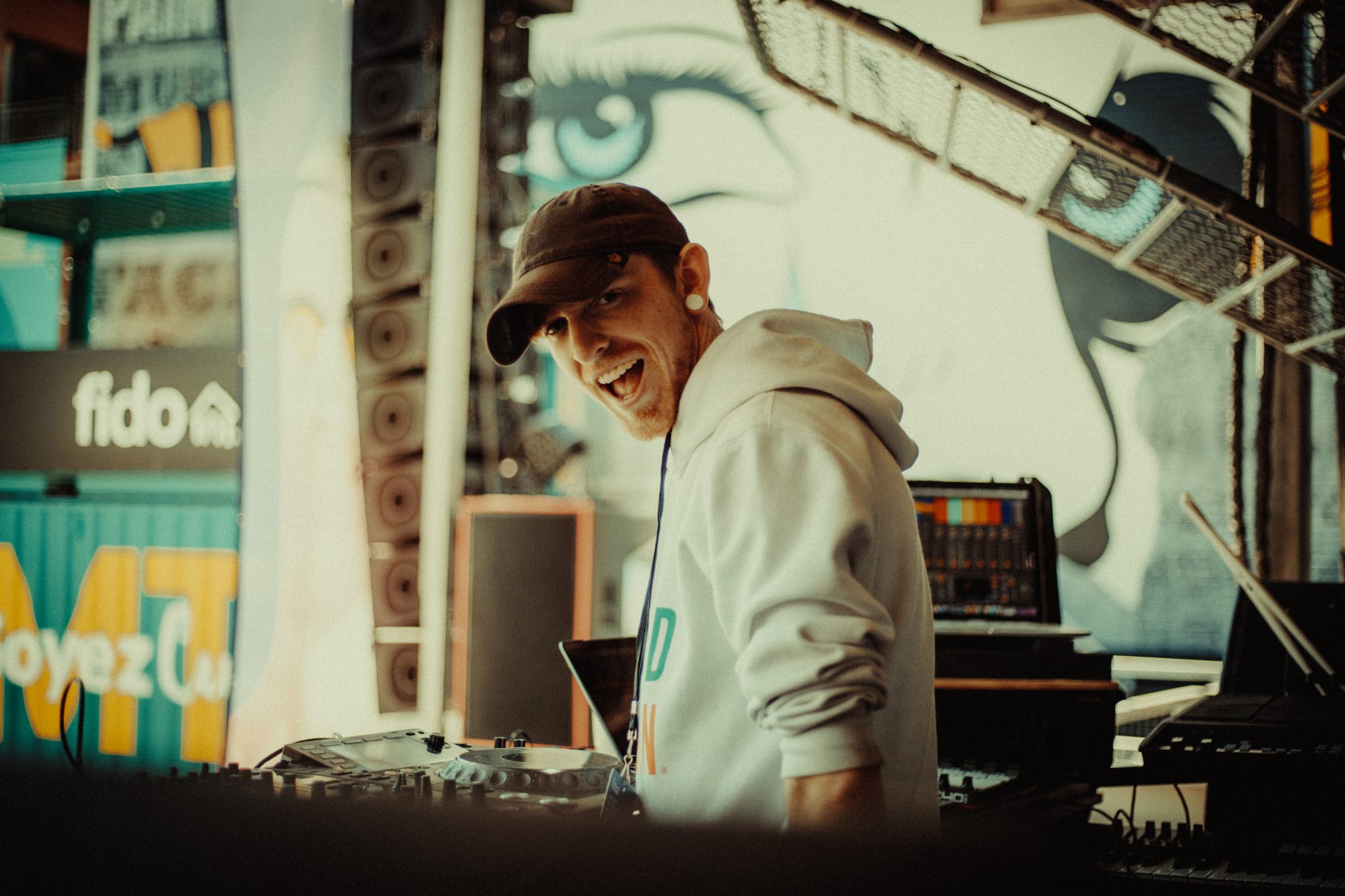 Said the Sky chats about his album Wide-Eyed, shares some of his favorite memories, and goes in-depth on his creative process.

Colorado-native Trevor Chistensen, aka Said The Sky, was first introduced to the world of music through learning the piano at the age of eight. Although he quit lessons early on, he re-ignited his passion and began learning other instruments throughout middle school. After taking the Digital Audio Production class offered at his high school his interests quickly shifted toward electronic dance music. Once he attended Berklee College of Music he really began to grow in his understanding of music theory would eventually launch his musical career and it’s clear that he hasn’t looked back since.

With such a large musical arsenal at his disposal, Said the Sky truly brings a fresh experience to the scene. His captivating melodies combined with his expressive bass lines will have you feeling some kind of way. His debut album, Wide-Eyed, released earlier this year can be described in one word: beautiful. The 15-track masterpiece that you can listen to below will take you on a stunning and emotional journey that you won’t be able to stop.

The sun was setting at Goldrush Music Festival and Said The Sky was pulling at every heart string as the sun dipped just below the horizon. Later that night, I was able to sit down with him and talk about his album and his own connection to this music that so many identify with. Listen to Wide-Eyed below and keep reading as Said The Sky chats about his album and so much more.

Thank you for joining us here at Goldrush Music Festival to chat! You just released your full-length album Wide-Eyed a little while back, what was the hardest part about putting that album together?

Ooh, that’s a good question. I think the toughest part for me was mastering it all in a way that you could listen to the whole thing and it felt like it all belonged together and not just a bunch of random songs. Which I mean, there’s a lot that goes into that, the vibe of every song and the mood that every song sets kind of does have to work and move into the next one. I would just say the overall sonic experience of the album is probably the biggest challenge that I faced.

What were some of the inspirations for Wide-Eyed?

There were so many, and it is so hard because it comes from everywhere. People I’ve been really enjoying lately are like ODESZA, they inspire a lot of what I’ve been doing recently. I just love their music, you go to an ODESZA show and you just enjoy. No one is going there expecting to rage or anything. You don’t have to headbang, you don’t even have to dance if you don’t want to, but you can if you want. It’s just cool, it’s a really good vibe, and I just love their music.

But then you have other people too, I’ve been listening to a lot of indie music lately like Mokita, he’s a really good blend of indie and electronic music. Then you have people like Novo Amor and Ed Tullett, which is straight up indie and I love that. It’s just really chill, good music.

People like San Holo are doing a really great job blending that stuff as well. I love what San Holo has been doing, so definitely his work. And people like Owl City from day one obviously had an impact.

Several of the songs on the album evoke some powerful memories and emotions, what were some of the tracks that affect you personally?

Sometimes there are songs that I’ll have input for, like “Hold Me Closer” was cool on the album because that was just me, my music, just guitar, piano, and some orchestral stuff in the background, just a short little interlude. But to me, I love that song so much because I had an image in my head of what I saw and what I was feeling during that song. That one came together very organically for me.

But there are other songs like “Affection” and “All I Got”, a lot of these other ones that I sometimes had input in the lyrics and other times I didn’t have any at all, and for those ones its like I listen to those and then I apply them to situations that I’ve had. I listen to those lyrics, figure out how that fits me, and then build the production and vibe around what that makes me feel.

So you create a personal identity with the songs themselves.

We especially loved your track with Dabin on the album, “Superstar”. Over the years you’ve also collaborated with Illenium and other artists. How has collaborating helped you grow musically?

I was familiar with Dabin obviously, we’ve been friends for a while, and I’ve been familiar with his music. But when it comes to production and producing a song, he’ll do things that I wouldn’t have even thought of and vice versa. And that’s a really cool thing, just to keep an open mind and pick up different tricks.

Another aspect of that is that when you get to a certain point in your career you reach a spot where you feel you have to put music out that’s good enough for everybody else, if that makes sense. It has to be good enough for all your fans to absolutely love, and new fans to love just as much. It can get kind of taxing at times emotionally and mentally, so sometimes when you’re collaborating with someone else it can be nice to just be like “this is going to turn into whatever it’s going to turn into.” They’re going to do what they love on the track and I’m going to do what I love on the track and it’s just going to work.

It’s almost less stressful working with other people because you’re not too worried about how things are going to turn out, it’s more liberating, freeing in a sense.

For anyone who has never listened to your music before, what are three must-hear Said The Sky tracks?

I would say “All I Got” is a big one. “Over Getting Over You” is one that I really like. And what is the third one… I mean the “Fireflies” remix is one that I will always love a lot, I will always play that out probably until whatever day I decide to quit. [Laughs]

Do you have any advice for aspiring artists who want to make waves in the melodic genre?

So in the melodic genre specifically, if that’s what you’re going for, a lot of that is music theory. Music theory does play a large part in understanding why some listeners feel the way they do. Because chord changes and chord progressions and melody and harmony, those all play such a huge part in building a mood in a song. That’s why you can listen to a piano song, there are no lyrics, no drums, it’s just piano, but you feel something from that.

If you actually sit down and listen to a piano piece, you feel something the same way that if you listen to a different piano piece you’ll feel something totally different. If you can understand that, that will be a really good start to understanding that the notes that you choose are going to have a very large impact regardless of mixing and mastering. You can understand sonics and mixing perfectly and be able to mix any song down but a good mixdown doesn’t mean that you’ll feel something from a song necessarily. Focus on the notes for sure, mixing and mastering are also a huge thing but that will come in time.

Have you ever thought about singing on a future track of your own?

So I did actually sing on one song, it was just an interlude, but the “Hold Me Closer” song on the album, I did sing on that one. But a future song… I’ve thought about it before. My whole thing with me singing on a track, I might at some point but I would want to take vocal lessons and really understand my voice before I sing on a full produced out song. Just because I feel like some people out there have voices that as soon as they start singing you’re like “I want to listen to this person’s voice for the rest of my life”. I don’t know if I necessarily have that voice so if I can find someone else who can sing what I want better, then I would almost rather have that.

You’ve played at so many festivals and events lately, what were some of your favorite memories or experiences so far?

That’s tricky. Actually, I’d say three years ago playing at Moonrise in Baltimore was amazing. That was still when I was kinda starting out a little bit and I had only played for a few large crowds at that point

That was in 2015 right? That was actually the first time I saw you!

Yeah, no way! Small world. [Laughs] That was a big one, honestly, because it started raining a little bit that day and it forced a bunch of people into the tent while I was playing.

I was one of those people! [Laughs]

Nice! Heck yeah, dope. Yeah there was this huge crowd and it was cool, it was a really cool feeling because once it stopped raining I was worried that everyone was going to bounce but a lot of them stayed. I kept the crowd and it felt really cool, I was glad that they were enjoying what I was playing.

After you finish things up on the Wide-Eyed Tour, what’s next for Said The Sky?

That’s a great question, I don’t even know right now. Honestly, I have a little remix I’ve been working on that might come out pretty soon that I’m excited about. I already have some other originals I’m working on, but as far as when they’re coming out I have no idea just yet. I think after the tour I’m going to try to take a little month off, at least a couple of weeks to take off entirely and do nothing for like two weeks and reset everything. Then I’ll hop back into everything, maybe another album, maybe some more singles, I have no idea.

Finally, what’s your favorite guilty pleasure food while you’re on the road?

I have the stomach of a bird, I don’t eat that much, unfortunately, but I’m trying to think of food that I like while I’m on tour. It’s not really a guilty pleasure, but I love sushi, like if we can find a sushi restaurant wherever I’m playing, yes, that’s where I want to be.

That’s all the questions we’ve got for you, thanks!

Connect with Said The Sky on Social Media: