The new and improved HARD Summer returned August 5-6 for a weekend of Yellow Mustard, Electric Beaches, and Shady Lanes.

Last year may have marked the tenth anniversary of HARD Summer, but 2018 was arguably far more important for the Insomniac and HARD Events Teams. After the 2016 edition which was hosted at the Auto Club Speedway in Fontana, CA, the annual summer fest suffered scrutiny from attendees, who complained of unnecessarily long entry lines, inconvenient stage layout, and too hot conditions with too few free water refill stations. The 2017 edition relocated to Glen Helen Amphitheater, but looking to correct the problems they initially faced, a return to Fontana was in the cards.

This year was also the first Gary Richards-less edition of HARD Summer, although his reminder for us to attend his new festival dubbed All My Friends was seen by many as an airplane banner circled the venue throughout the weekend. Armed with a new Head of Hard Events Megan DesChenes and promise of an improved layout, HSMF18 was a chance for HARD to start from scratch and hit the restart button.

Thanks to a powerful lineup filled with unique b2b sets and major artists like Virtual Self, TroyBoi, and Travis Scott, along with an array of massive production upgrades, this year, HARD Summer received the much-needed facelift it deserved. Taking a look at some of those major changes to this year’s edition, read on for some of the moments and memories that made this weekend one of the best experiences I’ve had at an event hosted by HARD.

Related: If you missed the fest last weekend or just want to re-live your favorite sets, make sure to check out our list of all of this year’s livesets!

When Shady Lane saved me and just about everyone else from the heat!

Although the temperature spiked well into the 90s and even reached the low 100s throughout the weekend, one of HARD Summer’s newest features helped keep us cool. Aptly dubbed the Shady Lane, this area kept everyone shaded when even the tented stages stood no chance against the scorching Southern California sun.

Shady Lane was a monster of 21 shade tents with a whopping 93 misting fans and 5,000 feet – yes, 5,000 feet – of misters. The new installment acted as the ultimate refuge after some time spent dancing in the heat and was even considerate enough to warn totem-toting (ha) ravers to keep them low so as not to accidentally get stuck in the misting lines. Thanks, Shady Lane!

When the Green Stage wasn’t located outside of the Speedway.

Although HARD Events mentioned they would be fixing the problem of having to walk outside of the main Speedway to get to the Green Stage, it was nice to see the implementation of this promise.

This year, all of the stages were relatively close to one another, with the HARD and HARDER stages being the furthest apart. Still, it was no more than a ten-minute walk to get from one end of the festival to the other. Alright, fifteen minutes, if you’re like me and made a necessary stop for a beer on the way over.

When moving stages closer together, there’s always the worry of sound bleed. Surprisingly, I experienced little, if any, of this throughout the weekend. Additionally, thank you, thank you, thank you HARD, for moving all of the stages from the asphalt onto the grass. I no longer felt as though I was an egg being cooked on a sidewalk and, despite tripping over a ditch once or twice due to an unwise choice in footwear I made Saturday, this minor tweak completely transformed the venue in the best way possible.

As Aussie house God Fisher was throwing it down at the Pink Stage Saturday evening, he noticed a totem in the crowd which featured a giant picture of his bare ass bumping up and down with the music. Next thing I know, he’s somehow gotten the totem on stage and poses with it, mimicking the photo.

The duration of the set was just another affirmation as to why Fisher is one of the hottest artists right now. The energetic crowd was so massive that it barely packed itself into the confining overhead of the Pink Stage tent and people spilled out on every side, dancing along to favorites like “Losing It” and “Ya Kidding.” Fisher himself looked as though he was having the most fun of all and I must say, if you think his music is impressive, you should see his dance moves.

When Yellow Mustard proved that opposites do in fact attract.

These two groups may make for an unlikely partnership, but if their Saturday night closing set proved anything, it’s that opposites attract and together, these two make some damn good music. As soon as I saw this name on the lineup, I knew this was a set not to miss. About fifteen minutes before they were set to go on, I grabbed my poor unsuspecting boyfriend’s hand and, like a human bulldozer, somehow managed to get us all the way to the rail.

Am I proud of this? No, as mature, 22-year-old woman, I am not and deeply apologize to anyone’s feet who were personally victimized by myself and my combat boots – my feet have still not recovered from those shoes or the blisters if that makes you feel any better.

Was it worth it? Absolutely. Yellow Claw and DJ Mustard both played to their strengths and delivered an epic set that wove together current elements of both electronic music and hip-hop, two genres the two groups have roots in and are each expertly familiar with.

In the words of Yellow Mustard, “If you already like Yellow Mustard, do you want a side of onions?” No, I’m not altogether sure what that means, but if it’s anything like their set, then it’s awesome.

Apart from those major moments, there were also plenty of honorable mentions that made my experience at HARD Summer a memorable one.

When Big Wild whistled live when he played his remix of Sylvan Esso’s “Hey Mami”.

That guy has some mad whistling skills.

When Sacha Robotti lit up the Pink Stage with “Fuck Trump” visuals.

Not to mention, his set was so groovy, even the police officers couldn’t help but nod their heads along.

When I noticed that Insomniac’s Ground Control was present to make sure that everyone was safe.

Although accidents happen at every event, it was great to see HARD bringing on one of Insomniac’s best initiatives in an effort to keep the event safer and attendees healthier.

When Zed’s Dead b2b Jauz blew up the HARD Stage, figuratively and literally.

Between the hard-hitting tracks these guys were dropping and the pyrotechnics that seemed to explode out of the stage every five minutes, this b2b set was definitely one of my favorites of the weekend.

When up-and-comer Pluko killed it at the HARD Stage and started Sunday off right.

Seriously, there’s a reason why he’s signed by Odesza’s music label. Don’t sleep on his sick style behind the decks.

When Virtual Self made the entire crowd feel as though they were in a giant retro arcade game.

Lasers and the Kingdom Hearts theme song?? Come ON.

And lastly, when the cabanas at the Corona Electric Beach Stage made both an excellent backdrop for an Instagram and comfortable chair.

This year, one of HARD Summer’s main sponsors was Corona, so obviously, that meant the return of the beloved tropical festival oasis, the Corona Electric Beach Stage. The 2018 setup featured a shaded, partially fenced off area that incorporated all of the best parts of any tropical vacation getaway: sand, palm trees, and of course, beer.

Plus, there were two 21+ areas filled with cabana chairs that allowed anyone of age to relax in the shade while enjoying the techno house beats that dominated the stage throughout the weekend. Oh yeah, I found my beach all right.

Overall, this year’s edition of HARD Summer was a fantastic one, and hopefully, they continue to improve this festival in the future.

The biggest issue that both myself and thousands of other attendees faced was the absolute nightmare of leaving the festival each night. Being stuck in traffic for hours after an event is not desirable, and with many people being exhausted from partying in the hot sun all day, it can also be dangerous.

Besides the horrific traffic, my only major grievance with this year’s event is a booking issue above all else. I felt that they definitely could have booked more female artists on their lineup who would definitely have thrown down some sick beats as well. HARD, you’re literally run by a girl boss now, so please start putting some more of them on your lineup.

What was your favorite memory from HARD Summer this year? Let us know in the comments! 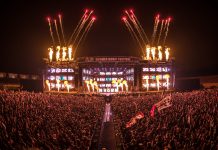 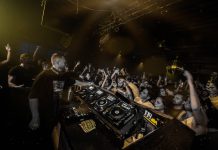