Paradiso Festival came back to the Gorge for two days of “where digital meets nature” with heavy headliners deadmau5, Armin van Buuren, and more!

Upon hearing that Live Nation Concerts added Paradiso Festival for Festival Passholders again, I jumped on the chance to head back to the Gorge. The lineup featured a wide variety of electronic acts from trance to bass music in the quest to give newcomers a taste of all the different genres. Last year’s 2017 edition blew me away with its unique vibes and beautiful landscape. With the event pushed a week early, I prayed for cooler weather and while I did get that, it came at a price.

Before the festival started, USC Events made a few special announcements to get the momentum flowing for the event. They revealed that Deadmau5 would be bringing his famous cube to the event. Jax Jones could not attend the event but USC found his replacement with Seven Lions playing a b2b show with Dimibo. Lastly, the event organizers announced a new feature to their event known as the “Flow Garden”. Rather than seeing a variety of flow artists walking around the event, many found themselves giving shows to people in the garden.

With Paradiso Festival expanding, I went back in order to see the next transformation of the event live and in person. While we have no shortage of events in SoCal, none live up to the scenic majesty of the Gorge!

The event organizers wanted to go bigger for this year’s stage with eye-popping lasers and lighting rigs.

While the stage did not appear to be as impressive as the gorgeous scenery of the Gorge during the day, when the skies darken to the night at Paradiso, all of the stages became more pronounced, especially the main stage. I watched as Armin van Buuren, deadmau5, and Virtual Self took the stage with their epic graphics, lighting, and song selections. All three artists delivered epic performances but many were blown away by Armin van Buuren’s set most of all. Several attendees expressed how much energy he brought to Paradiso and because of this, he acquired some new fans.

The most beautiful set for me that weekend was Paul van Dyk on the main stage as the rain clouds mingled with the sunset. It was the most heavenly sight I had ever seen at an event where the clouds reflected the red and orange colors of the sunset. Combined with the music of Paul van Dyk, it represented a beautiful moment where the digital nature of electronic music fused together with an earthly scene. It was almost like I was seeing a trance music video come to life before my very eyes.

Organizers brought out more dancers this year with several groups decked out in some amazing outfits. There appeared to be more performers than ever at this year’s Paradiso. While the main stage featured some fire dancers on occasion, I saw several different dancers frequently grace the Digital Oasis stage as well. It reminded me of the Insomniac Entertainers who can be found almost anywhere at Insomniac events. It was a nice touch to see how that level of excellence was also present at Paradiso Festival.

Apart from the glorious venue, Paradiso camping continues to add to the festival experience.

Camping might not be for everyone, but it does make it easier for people to travel to and from an event. Paradiso offers a wide variety of camping options for their attendees. You can choose from GA, Premier, Terrace, Gold, and Oasis camping. Out of all the options, many natives recommend you avoid going to GA camping known as “District 9”. Based on the camping arrangements, GA camping is the farthest from the venue. From GA, it is a good 1.5-mile walk but the least expensive of the options.

Upon hearing how difficult GA camping can be, my group and I decided on camping in premier camping. Almost twice the price of GA camping, premier camping offers a shuttle to the venue, a bigger space, and free showers. All of the amenities offered in the premier camping definitely made the experience less exhausting. For anyone looking to camp near the venue at a reasonable price, go with the premier option.

While the production and music went smoothly, the logistics and planning of the event need some improvement.

Last year’s Paradiso crowd experienced long wait times to enter, and this year’s attendees also suffered the same fate. My friends who purchased GA tickets had to endure another two to three-hour wait to get inside the venue. Something about the excitement of the first day just attracts a lot of people to get to the venue earlier resulting in long wait periods. On the second day, my friends found themselves entering the venue quicker.

The biggest challenge Paradiso Festival organizers faced this year was the thunder and lightning storm on day two. Right before the rain started coming down, the music stopped and people left to find shelter somewhere around the festival. Many attendees hid under the locker tent, but there wasn’t enough shelter for all of the attendees. When the rain stopped, we heard security tell everyone to vacate the venue. They also told us that we would be able to all re-enter the venue later when the storm passed.

Several people stayed and within an hour, the music resumed again. Somehow, enough people got enough notifications on their Paradiso apps to see the schedule change. Some sets were cut short to help keep the music on schedule, but I was amazed at how quickly the organizers managed to turn around the situation!

Despite the craziness of the weather, Paradiso Festival should be on everyone’s festival to-do list.

With the EDM scene growing in Seattle, Paradiso will continue to thrive and expand. USC does a great job of creating a good lineup and environment for festival goers. But above all, I just love how welcoming and helpful the crowd is. Even though it’s a bit of a trek from Seattle to the Gorge, it’s an adventure worth taking and an event you don’t want to miss! 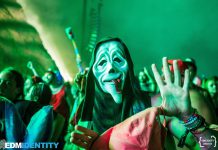 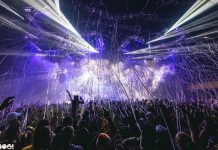