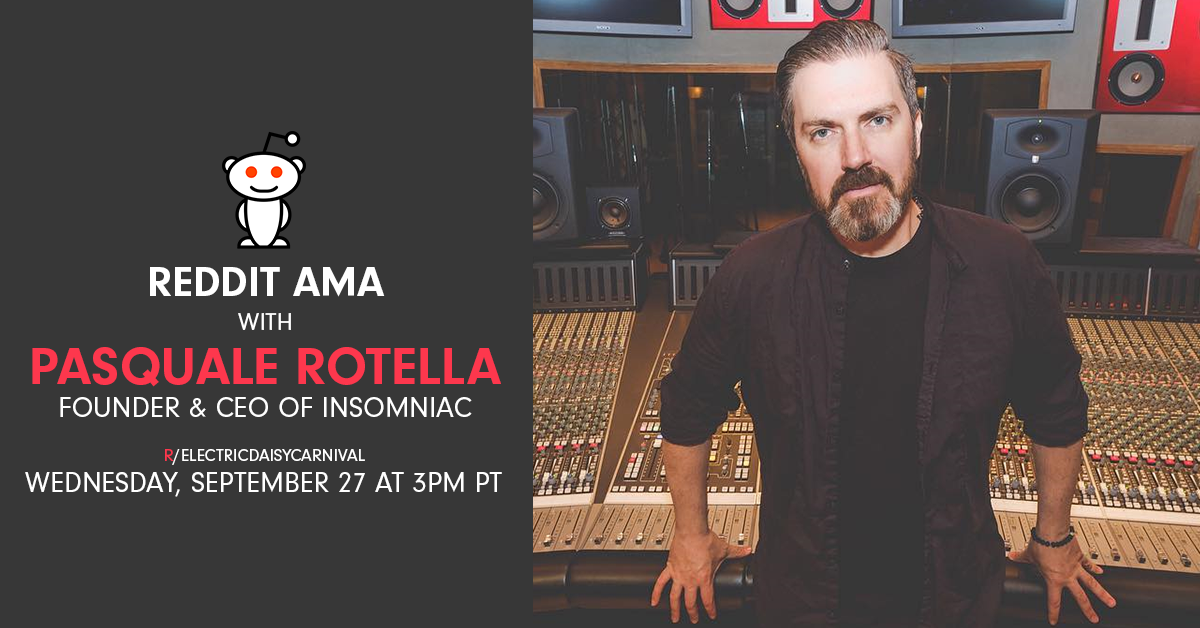 Pasquale Rotella will be answering questions from Redditors on the r/electricdaisycarnival subreddit on September 27!

After keeping the secret under wraps and having their own series of announcements about the announcement in the EDC Reddit Facebook Group, the news is finally out! Officially announced today, some of the most devoted fans of Electric Daisy Carnival will have the opportunity to have their most pressing questions answered by Insomniac Events Founder & CEO, Pasquale Rotella in an exclusive AMA (Ask Me Anything) on September 27 from 3pm to 4pm PT.

Coming just one day before the tickets for EDC Las Vegas 2018 go on sale, the team of subreddit moderators and Insomniac Events worked together to make this AMA possible. This will be the first AMA that Pasquale has conducted since his last chat with Reddit back in 2014, and the first-ever on the r/electricdaisycarnival subreddit itself. The post will be open for questions the day of the AMA, and make sure that if you submit something on your mind that it is left as a “top-level comment” for visibility.

Check out Pasquale’s Official Announcement from his Facebook Page:

We are hopeful that many of the questions regarding the changes to EDC Las Vegas this year will be answered, as there are many new updates and additions to the festival coming in 2018. Details about the camping situation, how the new shuttle service will be handled, and more are already on the minds of many who plan on attending. Additionally, we expect to see questions about other Insomniac shows that have faced their own controversies like Middlelands and their search for a new venue to host that festival.

If you’ll be at work during the AMA or miss it for some reason, don’t worry! Post-AMA, the EDM Identity Team will compile the top questions submitted and responses from Pasquale to keep you in the know about everything that went down!

Want to get more details on what EDC Reddit is and why this community means so much to so many people? Read our post about r/electricdaisycarnival from our #EDC20 series!

What questions do you have for Pasquale? Let us know in the comments!