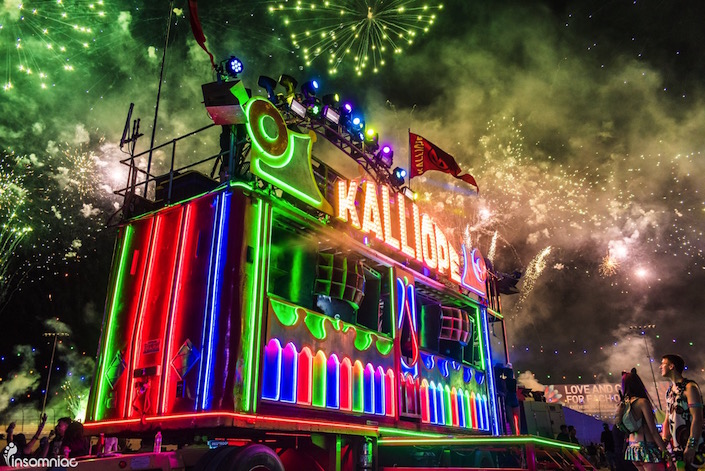 One of the hidden gems of EDC Las Vegas is their epic lineups for Art Cars that can be found throughout the venue.

Not every set at EDC Las Vegas is on a stage. Some of the best secret sets are played on Insomniac amazing fleet of art cars. Over the last several years, we’ve seen the likes of Hardwell, Kaskade, Seven Lions, and more play sets which are far different from the sets they play on normal stages at the festival. These inspired art cars not only look cool but are tricked out to travel around the festival with banging beats in progress.

When Insomniac’s EDC Las Vegas lineup dropped last month, it also included this year’s art car special guest hosts such as Brownies & Lemonade, Desert Hearts, Monstercat, Psy Tribe, and Trap Nation. These lineups were deemed “TBA” but in the lead up to the festival, they have begun to be released.

So far, the lineups that have been released include Cats & Boots Boombox Art Car Takeover, and the Monstercat and Desert Hearts Takeovers of the Kalliope Art Car!

Looking for the EDC Las Vegas lineup? Check out our post here!

Check out the trippy announcement video for Monstercat’s Takeover of the Kalliope Art Car:

The Kalliope Art Car was named after the Greek muse of poetry and created by Burning Man’s Camp Walter. This mobile stage features “three floors, fully equipped with 70,000 watts of high fidelity audio, dynamic lasers, flame effects and a sea of multi-colored LEDS.” The art car can hold about 30 attendees while in operation. Kalliope does not operate on her own and is pulled by a fellow art car known as the Heathen. The Heathen is a truck with large horns, lights, old school speakers, and a giant propane ring that shoots rings of fire 20 feet into the air. Both cars first debuted at Burning Man back in 2013.

One of Insomniac’s most recognizable art cars is the Boombox art car designed to look like a 1980s ghetto blaster. Its creator, Derek Wunder, originally dubbed it the Rockbox before Insomniac’s Ian Oosthulzen purchased it. Insomniac renovated the art car to have a “more mechanically sound motorhome, a new sound system, new LED lights to outline the tape deck, dials, and speakers.” Since Insomniac acquired the Boombox art car it has been seen at EDC Las Vegas, EDC New York, Beyond Wonderland in both SoCal and Bay Area, Burning Man, and Life is Beautiful.

I set out to build the ULTIMATE Art Car almost a year ago, and with a team of incredible people, this thing is a REALITY now! This lil’ concept vid doesn’t come close to doing it justice in real life, but it def gives u a nice taste!

Some specs: 55 foot mobile dancefloor pimped out with 4 RGB lasers, 4 flame cannons, a massive Funktion One sound system, & a 360-degree LED “nest” that houses our 16-foot owl guardian! Oh, and a fully functioning bar for when we really need to get the party cracking.

This was dreamt up and handcrafted for #EDCLV — for YOU Headliners — and I can’t wait for you all to see it in person and climb aboard as PARLIAMENT makes its maiden voyage!

What happens when you combine dust, design, a Funktion One sound system, flame cannons, a mechanical owl, a motor and some wheels? The Insomniac “Wide Awake” Art Car that debuted at Burning Man 2011, garnering the “Best in Show” Award for art cars!