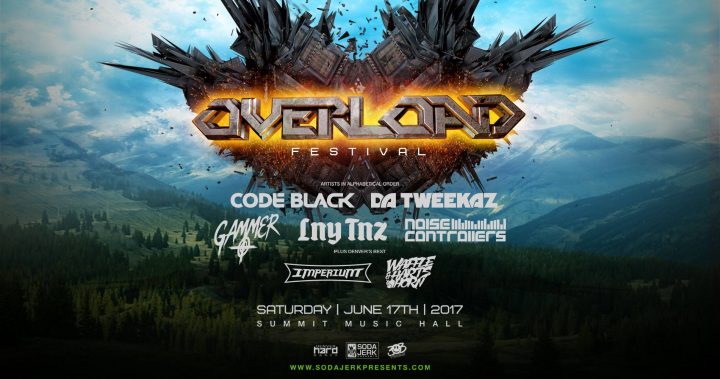 This June marks the beginning of something massive: the first edition of OVERLOAD Festival in Denver!

Fans of the harder and faster styles of dance have long found their favorite artists underrepresented on festival lineups. This summer looks to change all that with the launch of OVERLOAD Festival, Denver’s very first-ever hardstyle dance festival. Hosted by Soda Jerk Presents in conjunction with 303 Family and Denver Hard Dance, the single-day micro-festival will take place on June 17 at Summit Music Hall in the heart of downtown Denver.

The lineup spans a range of well-known international hardstyle artists and local talent. Attendees will be treated to sets by melodic hardstyle producer Code Black, still riding high from the release of “Wild Ones” with Elle Vee, and Norwegian euphoric hardstyle duo Da Tweekaz, fresh off their 2017 Tweeka Tour and slated for a dozen festival performances this summer.

They will be joined by UK hardcore and hard dance producer Gammer, who just dropped a huge remix of Pegboard Nerds x Quiet Disorder’s “Go Berzerk”, as well as the genre-defying Dutch duo LNY TNZ, who are in the midst of a massive 2017 festival schedule including performances at EDC Las Vegas and Tomorrowland. Last but certainly not least, hard-dance veteran Noisecontrollers, who has played a major role in defining the hardstyle genre for nearly ten years and continues to surprise and delight fans around the world at every major event.

Denver locals Imperium and Waffle & Hartshorn round out the day’s musical offerings for an event that will have hard dance lovers shuffling all day and night long.

Check out the OVERLOAD Festival 2017 Preview Video on Facebook: