Imagine Music Festival has already announced its return to Atlanta Motor Speedway this September 22-24, 2017 for the fourth edition of the immersive aquatic fairytale and this year’s lineup is seriously stacked!

Following an epic third year extravaganza, which saw the region’s largest independent EDM camping festival that saw fans from all over the world descend upon the Atlanta Motor Speedway for a weekend full of urban beats and melodic rhythms, Imagine has finally released the first phase of its 2017 lineup! This year’s list of talent is bigger and better than ever. Returning to Atlanta Motor Speedway in Atlanta, Georgia on September 22 – 24, 2017, Imagine Music Festival is continuing its trend of attracting some of the biggest names from around the globe. The first round of headliners for the highly-anticipated music and camping festival include dance music sultans, Above & Beyond, Deadmau5, Tiësto, Pretty Lights Live, and Gorgon City!

But the lineup is not the only amazing news to drop. The return to the venue means fans can expect plenty of upgrades, based in large part to feedback from its 2016 attendees. Expanded water stations, camping upgrades, improved VIP area, shade and charging stations, food options, dancers, art, workshops, the return of the Imagine pool and of course an even bigger and better lineup. As one of the country’s last remaining independent festivals, Imagine creates an all-encompassing, 360-degree sensory experience that blends music, circus troupes, performers, dancers, art, workshops, classes and more.

Check out my review of Imagine Music Festival 2016 by clicking here!

This is what Glenn and Madeleine Goodhand, the founders of Iris Presents and the brilliant minds behind Imagine Music Festival, had to say about the lineup and event:

“The festival is a living and breathing representation of our guests wishes and imagination. Each year we are challenged to not only top the lineup from the year before, but exceed expectations- this lineup is just the beginning of the magic that awaits.”

Check out the official Imagine Music Festival 2016 Aftermovie on YouTube: 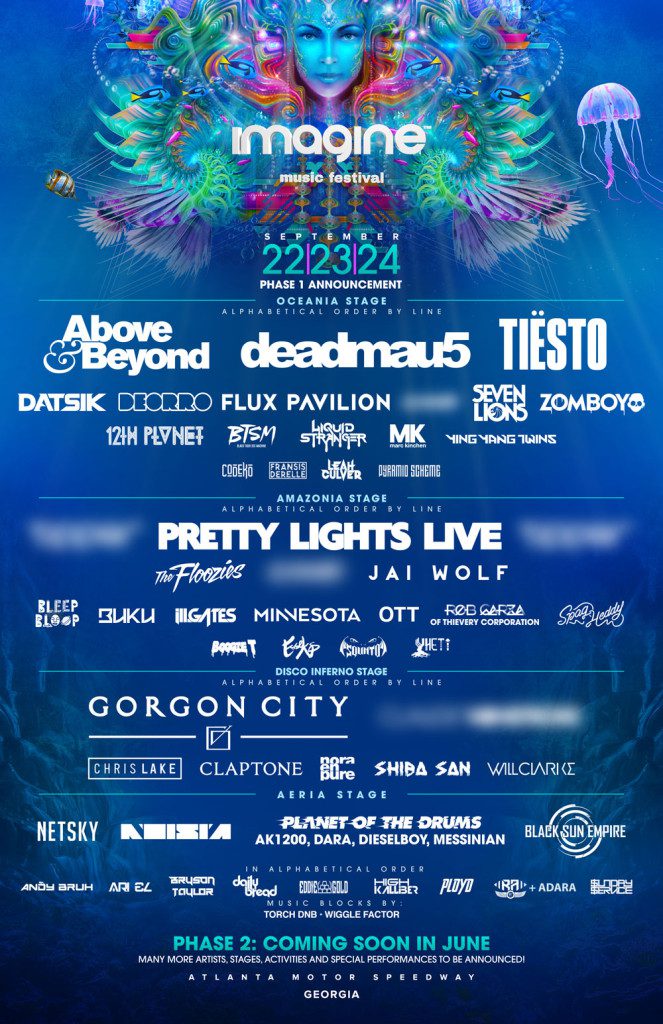 Stay tuned as a second round of artists and additional stages will be announced in the coming weeks!

Want to be part of Imagine Music Festival’s action this year? Check out the details below!