Ultra Worldwide has had a monumental year! With the conclusion of last weekend’s sold out Ultra Brasil event, the brand officially completed its gargantuan 5-continent, 17-country, 26-event global tour.

Ultra is truly a worldwide brand that has accomplished a feat that no other company has yet to do and at a scale that is amazing! In this past year, a total of over 1,000,000 Ultranauts have attended the festivities, over 165 million have tuned in to join the experience via UMF TV’s streaming platform and the UMF after movies have garnered over 40 million unique views. Ultra Worldwide has truly infected the world with amazing beats and solid production! Another monumental event in Ultra history was the production and execution of the standalone RESISTANCE brand. These sold-out shows took place in Paraguay, Peru and Chile. RESISTANCE is a unique concept first came into play during Ultra Brasil in 2015. Since then, it has been part of multiple Ultra festivals including Ultra Bali, Brasil, Japan, Croatia, Singapore and South Africa. However, this month, Ultra took the concept one step forward and created the standalone events that hosted massive techno artist such as Tale of Us, Nicole Moudaber, Steve Lawler, Carl Cox and so many more. As someone who loved the RESISTANCE stage at Ultra Miami, I’m looking forward to what is in store for this unique for 2017. Did you attend any of the Ultra Worldwide events in 2016? Let us know about your experiences! 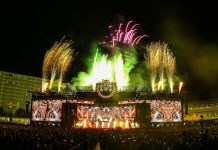