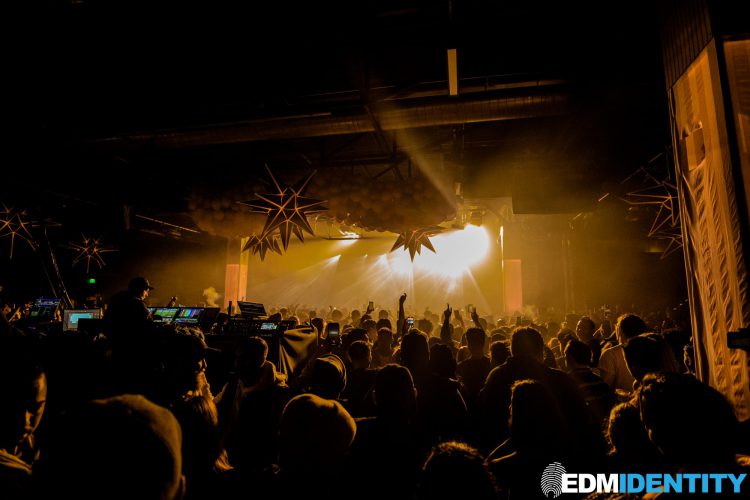 Fresh Start cranked up the heat at The Midway to deliver bumping beats and good vibes despite difficult weather conditions on NYE weekend.

New Year’s Eve has become one of the most desirable holidays for dance music lovers to catch some of their favorite artists and spend time with friends. While the circumstances and variables may change for everyone, one thing that is shared is the sentiment of hitting the imaginary reset button and getting a “fresh start.” This holds true in San Francisco, with Fresh Start becoming the perfect blank canvas to be at to ring in the New Year. A big day means a big lineup, and there was no shortage of talent in any direction for the entire duration of the festival.

Hosted at The Midway SF, the massive venue was utterly transformed into a multi-stage full-production paradise. The moment I walked into the venue, it was clear that no details were missed. Each stage boasted massive LED walls, which were home to each artist’s visuals. The Ride stage felt the most intimate and made for the perfect nestled away dance nook. At the God’s and Monster’s stage, you were able to transport to an entirely different realm surrounded by luminescent totems.

The main stage was housed outdoors to accommodate the abundance of attendees and showcased a full fleet of truss lighting, LED walls, haze, and street signs to further encapsulate that traditional block party vibe. The decoration and design didn’t end at the stages. Even the interior hallways were outfitted with light-up funhouse mirrors and elegant curtains.

On top of the stellar stage design and decor, navigating the venue grounds was a breeze, with bright neon signs above each stage location to avoid confusion about where you were. It’s small details like this that often go unnoticed and are taken for granted until the festival go-er experiences difficulties navigating their way around the grounds, which could lead to potentially missing or being late to a certain set or performance.

After extensive preparation, Fresh Start opened up with a warm-up session on the evening of December 30 that featured Joe Kay. While the rain poured down from the sky outside, the inside was fairly mellow and low-key, with a lighter attendance. It was nice that they opened the space Friday and allowed everyone the opportunity to have some more time to dance and get acclimated to the venue.

Being present for the warm-up was so intriguing as it allowed you to see elements that aren’t typically showcased during the duration of the actual festival. Artists getting a feel for their deck set up, front-of-house crew dialing in the lights, and sound being EQ’d for the perfect balance and levels. The light crowd took complete advantage of the open dance space and settled into the space gearing up for the epic day ahead of them.

New Year’s Eve was a powerhouse day for every stage respectively.

Starting things off, Michael Milano crushed his set, serving up some bass-centric tunes. Girlz House was the next artist up, and they did not skip a beat with energy. There wasn’t a single body standing still in the entire room. These artists really paved the way and set the cadence of the rest of the day.

Continuing on, there wasn’t any dispute about it – vibes were high all day, and the party continued at the Space Yacht-hosted Ride stage as Tony H and Miss Dre continued to turn up the heat, sending the crowd into a full-on frenzy. Both DJs knew precisely how to bring the party to another level with fresh new music for the masses.

The crowd swelled as the day progressed, but there was a big curveball that struck Fresh Start when the big storm hit.

A big storm had been brewing around the venue, and the weather was something that was on the radar the entire time for the logistics team at The Midway. Despite being hit with severe rain and some flooding, the venue’s staff and security had contingency plans in place to ensure a safe party continued for all of the festivalgoers.

Adjustments were made to a few set times, and crews worked diligently to vacuum out excess water from the outdoor stage and surrounding areas. The communication from the festival organizers was prompt and honest. Patrons were kept in the loop with updates and changes as they came through, and there was never a time when you were left in the dark wondering what was happening next.

The storm eventually passed over, and the night was back on track for the headliners.

Coco and Breezy held it down on the Ride stage, delivering high-energy house music and ethereal visuals for their entire set. The evening concluded with ZHU and SOFI TUKKER completely flipping the mainstage upside down. When ZHU played “Came for the Low,” the entire main stage and crowd flashed red with bits of haze and waves of bass ripping through like a freight train. SOFI TUKKER closed the evening out strong with a flawless set, and as the clock struck midnight, canons of confetti erupted while the duo was giving the countdown and wishing the crowd a Happy New Year.

On New Year’s Day, there was no change in energy.

Everyone tapped into a completely new headspace on the first day of the year as the sunny weather welcomed the crowd back to the venue. The entire day consisted of electric music from every stage, and people were soaking up the music and using it to rejuvenate their souls. One thing was apparent, every artist that performed was there to bring their all. It was also refreshing to see strangers dancing together and sharing that communal experience to kick off 2023.

Wax Motif stood out with one of the most high-energy sets of the day. On top of having lighting that was out of this world, his visuals went hand in hand with the music. Seeing him perform felt like completing a quest. Bouncing between stages, I found myself in a hallway vibing with different people and taking their portraits. It was truly amazing to be able to interact with so many new faces at the festival. Everyone was genuinely excited to see a stranger with a camera snapping photos of all the random silly moments.

Sunday evening was buzzing, and John Summit had a huge part to play in this. Everybody that was near the main stage was hypnotized when he played “Revolution,” and when the song dropped, you could feel the ground shake. Hands were flailing with excitement as he enabled people to tap into a weightless state where the only thing that mattered was the next song.

Fresh Start was unapologetically itself in all of the best ways.

Fresh Start offered up great music from amazing artists and even better energy from the crowd throughout the weekend’s festivities. It didn’t matter if you were there alone or with friends – chances were you would end up linking up with new people regardless because of the layout of the venue and how easy it is to meander through the multiple stages with ease.

With that being said, if you have never been to Fresh Start and you are looking for a convenient festival with a great lineup, lighthearted vibes, and friendly people, this is an experience you should definitely check out. As we wish 2022 a farewell, we will be waiting with great anticipation to see what this festival has to offer in the future!