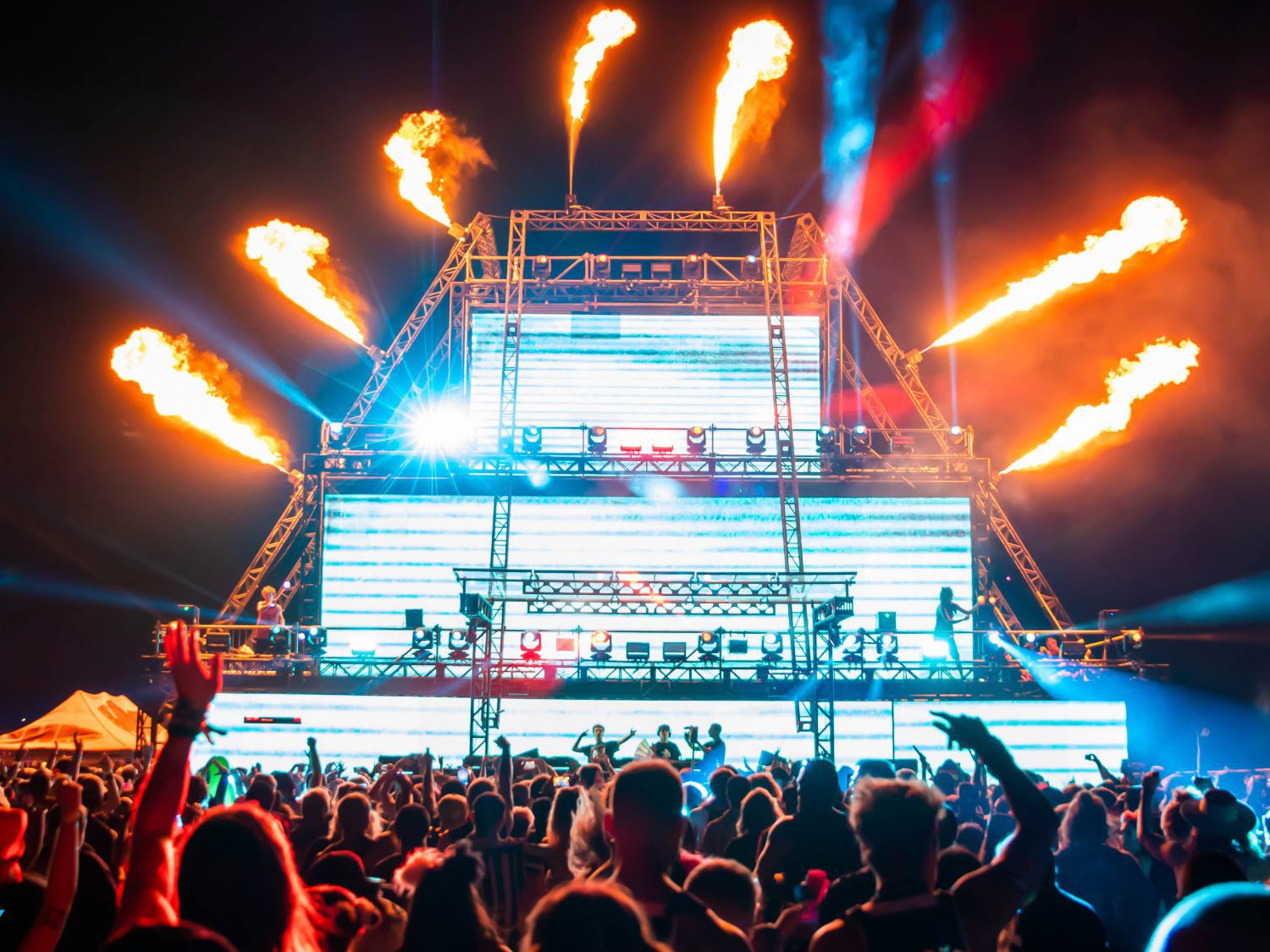 V2 Presents put on a killer experience in Utah and unveiled a new stage and festival layout for their tenth year of Das Energi!

Since its inception in 2012, Das Energi, an annual two-day event located on the salt flats at The Great Saltair, consistently brings in most of Utah’s electronic dance music fans. Beginning with a relatively small outdoor stage and a platform indoors, Das Energi has encountered quite the glow-up this year. The stacked lineup, including Deadmau5, Excision, Subtronics, Delta Heavy, Tinlicker, and Chris Lake, gave attendees the party of the summer, even when the rain came.

Having attended Das Energi since 2016, I knew what to expect for a V2 Presents festival at The Great Saltair. Das Energi features three stages, the main stage Energi Field on the lawn, the Temple of Boom on the Galactic Flats, and the Synergy Station inside. Though Utah has strict alcohol laws, attendees can enjoy the upstairs bar and the beer garden section outside.

Upon entering the festival on day one, the energy levels were high as we were greeted with a short line and easy security. Once inside, you truly felt pulled into the festivities with all the hanging art and intricate new Synergy Station stage layout. What once was a large void of space that felt like something was amiss, now felt like an intimate party closed off from the bathrooms and the rest of the emptiness in the building.

Outside was quite the incredulous advancement of stage design on the Energi Field, now rebranded the Titan stage, with over six LED screens and massive production upgrades. The main stage used many years ago, Temple of Boom, became the second, smaller stage on the salt flats with upgraded production as well. Additionally, the Temple of Boom moved closer to the Energi Field, cutting down the walking distance between them. Overall, Das Energi definitely got a facelift from years prior!

After catching the end of Tinlicker’s set, I perused around the Galactic Flats to check out the vendors.

Along my journey, I was pleasantly surprised by the food trucks! It was fantastic to see there were finally alternative food options to the regular mid-tier items inside. The food trucks offered included Lucky Slice Pizza and another with a variety of Mexican food. Along the rest of the Galatic Flats, there were a variety of fun art installations, including my favorite one; a giant disco ball! These many art pieces and the inclusion of the large ‘Das Energi’ sign made for great backdrops for many festival-goers’ photos.

My favorite set of Friday was the pure fire, drum and bass that Delta Heavy brought to the Synergy Station. Later on that night, HE$H b2b Leotrix threw down a headbanging set at the Temple of Boom that had the crowd on their feet going wild, while Subtronics ended the night strong with the best laser show that day. They played classic favorites in addition to remixes of current circulating songs, which brought in a good crowd of DnB lovers and those new to the genre. Finally, Deadmau5 closed the night at Titan with a fire techno set that kept attendees enjoying until the end.

Though Friday was sunshine and clear skies, Saturday brought a mess of weather.

As the day turned to night, storm clouds thickened, and a drizzle accompanied them, but this didn’t stop the fun. Highlights of the day included Jessica Audiffred bringing the heat as the sun went down and Phantoms (DJ Set), giving the people feel-good tech house music. One of my favorite parts of the night was hearing Phantoms play “Design For You” as the rain drizzle glittered in the lasers, taking my breath away from the beauty of it.

After getting down and wubby to Inzo‘s deep bass, I headed inside to see Shiba San, shelter from the rain, and get my necessary house music fix. The Synergy Station lit up with people enjoying the beats from upstairs, downstairs, and in the VIP section. As Shiba San played, Wooli was outside, and though all three stages were close and next to each other, there was surprisingly no sound bleed between them.

Finally, as the crowd gathered to hear Excision play at Titan, the density of the rain increased, and bolts of lightning could be seen over the salt flats. After an excruciating 15 minutes, Excision finally came out to finish off the weekend with a mix of heavy dubstep and melodic bass. Though I personally am not a fan of the melodic bass, the love in the crowd was evident each time the tempo slowed down.

While parking and leaving the festival is always challenging at Das Energi, I enjoyed the heightened level of security and staff.

People are no longer allowed to walk along the highway road in the dark to overflow parking, and though this made the bus line long and harsh in the rain, I felt it was a great addition to the safety of the guests. Disregarding the long wait time of over an hour for the shuttle, the whole process of getting to our lot was well-managed and organized. I believe with the addition of more shuttles, wait times can be cut down for the guests.

As every festival has its ups and downs, so Das Energi held a critical concern for me regarding ADA accommodations. With the intense mud and rugged terrain to get to the Galatic Flats, it was unfortunate that no pathways or means of transportation were made for patrons with a tough time traveling over uneven ground. The lack of access and availability for ADA patrons needs to be a top priority for change in future events. In addition, as Das Energi grows each year, proper accommodations must also be added.

We truly got to experience the beginning of a new era for a top-tier festival experience in Utah.

Overall, V2 Presents put on a tremendous tenth-year show regardless of the weather. Das Energi seems to bring in bigger crowds each year and continues to dazzle with incredible lineups. With a few logistical adjustments, Das Energi will continue to be the most highly-anticipated festival of the year in Utah. Who knows what surprises Das Energi will bring next year, but until then, continue on to check out the rest of the gallery from my amazing festival experience!