Find Out Why Everyone Can’t Get Enough of VCTRE 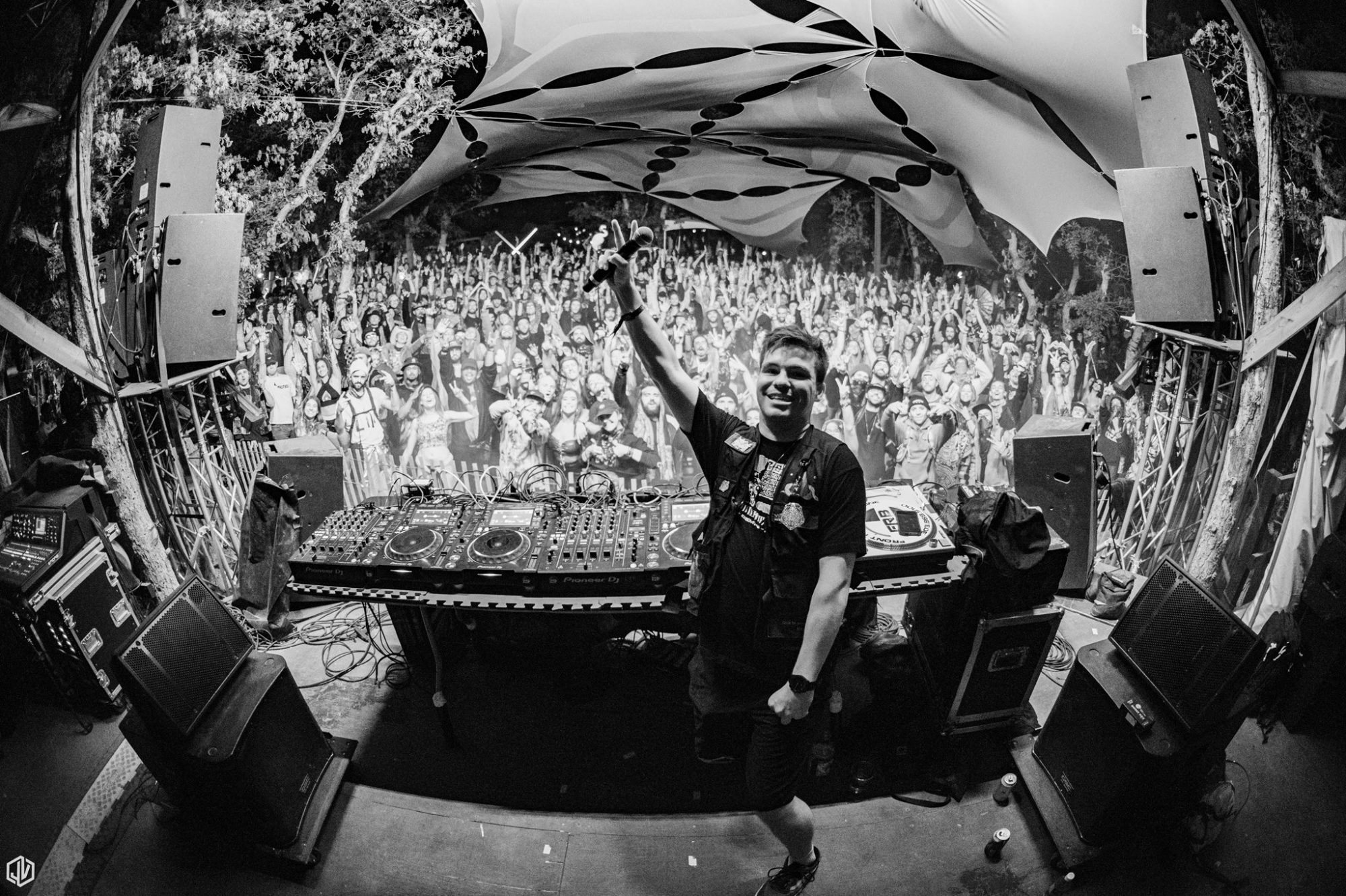 Talented DJ and producer VCTRE gave us a peek into his backstory, upcoming chill sets, his experience in the music scene, and more!

Alabama-based artist Aaron Pough, known more commonly as VCTRE, is capturing the ears of many with the unique style he brings to the decks. From his genuine personality to his banger beats, it’s easy to see why so many are joining the VCTRE fan club. Fans love to get lost in his guttural bass and exquisite music taste, and with tracks like “Try to Feel” and “Die Happy,” can you blame them for being obsessed? His frequencies are definitely crave-worthy, and luckily for us, his discography is continually growing with no sign of stopping.

VCTRE’s journey began with his first love encounter in this realm of music, dubstep, and artists like Coki and Skream. With a passion in his heart continuing to grow throughout high school and college, he began going to festivals which heightened his interest in finding the artists that resonated with him. All the little puzzle pieces that came together over the years eventually created one of the most creative and talented artists in the underground music scene.

In 2022 VCTRE has already impressed with multiple sets including Sonic Bloom, Bigfoot Electro, DEF, and all over the states with his co-headlining tour with Sumthin Sumthin. As he continues on his run of appearances this year, we had the opportunity to catch up with him and pick his brain on everything from his roots to his upcoming chill sets. Read on for the conversation and see what one of the fantastic artists making big waves in underground bass had to say – and don’t forget to subscribe to his Bandcamp for some special tunes.

Hi Aaron, thanks so much for chatting with me today. You’ve had quite a run of shows over the past month. What has it been like getting back on the road and playing at festivals like Sonic Bloom, Bigfoot Electro, and Kosmic Kingdom?

All three of these festivals were such a great time and put together extremely well. I started at Bigfoot with Carl [Black Carl!], and we performed our Integrate set. We played at 2am, and it was a vibe. There was fog covering the field, and it was shockingly cold outside, which is abnormal for summer in Tennessee. Nonetheless, it was an amazing night and well-run for a young festival.

Kosmic [Kingdom] was a hot, sweaty day of fun. I followed the homie NotLo, who crushed it, for a 6pm timeslot. I literally played on a castle with a full Hennessy rig; where else can you do that. [Laughs] Myself and the Ternion Sound crew also played a late-night set in this house on the fairgrounds where we got to play stuff we normally don’t.

Can you share what your thoughts are on Sonic Bloom and how your experience was this year?

I arrived at Bloom on Saturday from New Orleans and was immediately stoked to be there. I had wanted to play at this festival for years, so it was super exciting when the offer came in, especially to play one as myself and one as Integrate. I played late Saturday night, technically Sunday at 3:15am, which was exciting because I was the only stage running sound. It was cool to know that I would have at least a decent crowd at my set.

The set went well, and the energy was awesome; it was one of those where everything was going right. I even misread my set time and stopped 15 minutes early. The stage manager said, “dude, you have 15 minutes left,” so I frantically plugged my flash drive back in and started playing again. In hindsight, it was a nice break because we ripped right back into the set like it never stopped, and people didn’t leave and kept getting down.

On Sunday, Carl and I had a set at 9 PM right after Detox Unit. We got to the grounds around 3pm, and a massive storm immediately rolled through, which continued for hours. This wasn’t just a normal thunderstorm, it was hurricane-type winds. It was pretty wild, and we were afraid our set would get canceled.

After seeking cover, we finally got outside and could play outside at 9pm. It was really fun, we both were on the same page, and everything was going together extremely well. However, we both felt terrible for Detox Unit and droid because we know how much work they put in for their set, and it ultimately had to be canceled because the speakers on the stage were completely flooded, and some of the visual wall was blown off by the wind.

Overall the festival was great. All the art installations were beautiful, and the sound was on point, all things I love to see at festivals. I hope to return in the coming years.

You’ll play some chill sets at Solasta and Submersion toward the end of your tour this year. What led to your decision to play these sets? Was there a specific inspiration?

I have been making more chill music over the past couple of years that I am sort of afraid to play during my regular sets because I think people expect to hear a specific sound from me. This shouldn’t matter, but I let it get in my head and try and cater to a particular type of set. So these labeled chill sets are very exciting to me because people know what they will get, to a certain extent. They definitely are in for some cool surprises in certain types of songs I will be playing and the journey of the set from start to finish. I will keep the elaboration there so people can still have some surprise!

During this run, you also dropped a fantastic tune with Frij, “Fulcrum.” Can you speak to the production process on this one? What brought you together with Frij?

Frij is a fantastic producer that I found on SoundCloud. We started chatting there, and he put out a work-in-progress mix and had this little 16 Bar loop which ultimately is the intro of our now finished song. I messaged him, and he sent me the project file. I worked on the song for a couple of days, finally got the main rear for the first and second drop, and then sent that to him, where he ultimately bridged the rest of the song. It was such an easy process. I love doing collaborative works like this where it’s no pressure, and we are both on the same page without the finished product. I’m super happy with how it turned out.

Let’s get into your backstory a bit. Since you’re from Alabama, what’s the scene like there, and what led you to find a home in the dance music scene?

As of late, the dance music scene here is kind of dead. We don’t really have a main promoter who brings in tours or one-off electronic shows anymore. However, it was very much alive during high school, and my early college years, so I started to go to shows here. I initially fell in love with dubstep back in 2010 with people like Coki and Skream, along with artists like Pretty Lights, Paper Diamond, Baauer, and that whole wave of electronic music back in the 2012 to 2015 era.

These were fun, but I knew I wanted more from sound and started going to festivals around the southeast, like Counterpoint, where I saw people for the first time like Tipper, Zeds Dead, and other artists who have made major names for themselves. Since then, it has been a fun journey exploring and finding new artists I like.

You touched base on having Cerebral Palsy on Mr. Bill’s podcast briefly a few years ago. To dive deeper on the topic, what adversities have you overcome while producing and djing? Do you have any advice for anyone wanting to pursue a music career with Cerebral Palsy?

I don’t really find any difficulties producing. I sometimes am limited on the decks trying certain transitions, but I always find a way that mixes well despite pretty much only being able to use one hand. I don’t think about it too much; however, if I let it be something that stops me or let it make decisions for me, then that’s when it becomes a problem. But that all depends on my mindset, so if anyone else does have it, don’t let it cripple you before you even start. People don’t care that much, even though it might seem like they do through your eyes. And if they do, fuck ’em! I sometimes run into arrogant people but don’t give them the time of day.

Finally, just for fun, there’s a lot of controversy about the best fast-food burger chain. Answer this if you dare; what’s your fav chain to chow down on, and what’s your go-to order?

This is a tough one, but I think my answer is Zaxby‘s. This is a Southeast-only chain too, so I feel bad for anyone who has not experienced their delicious chicken. I think my go-to is either the Kickin’ Chicken sandwich combo or the wings and things traditional tossed-in tongue torch with a Cherry Coke and two extra ranch sauces.