Experience Lightning in a Bottle Through Zach’s Lens 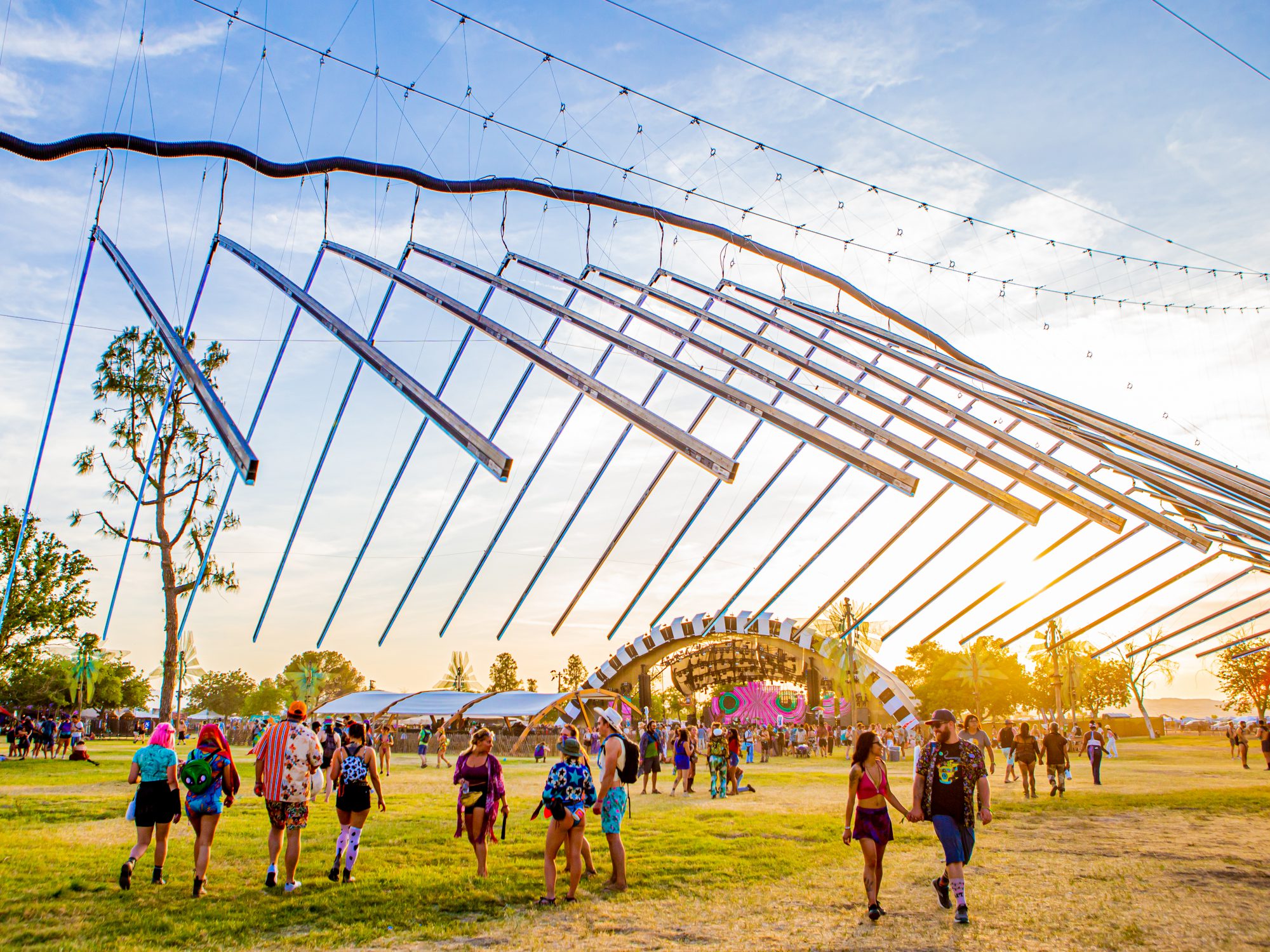 Take a trip back to Lightning in a Bottle with these hand-selected photos that will weave you through Zach’s experience at the festival!

After a challenging few years, Lightning in a Bottle made its return to Kern County at the Buena Vista Lake, and it was as magical as ever. Between the incredible variety of music, beautiful lake weather, thought-provoking workshops and art, mouth-watering food, and top-notch vibes from the attendees, this edition of Lightning in a Bottle reminded everyone why it’s one of their favorite festivals.

The music led the charge, with hundreds of artists playing across six different themed stages from Thursday to early Monday morning. Whether you bought a ticket to see live acts at the Lightning and Grand Artique, bass artists at the Thunder and Stacks, house and techno at the Woogie, or the all-encompassing and centrally located Junkyard, there was something musically for everyone. My group arrived early Wednesday to a brutal 105-degreed day, but we managed, set up camp, and were ready to get the weekend started come Thursday.

We kicked off the festivities Thursday at the Desert Hearts Launch party at LiBeach, where we were treated to unique sets from Mikey Lion and Marbs while splashing around the lake.

This was the second year Desert Hearts teamed up with Lightning in a Bottle to throw a takeover on Thursday, and I’m confident there is no better way to kick off a festival than with another mini-festival. Mikey Lion and Marbs held down the decks as campers from High Noon, Sunset, and Sunrise flooded into LiBeach. The party started at 9 AM and went to sundown and was the perfect way to beat the heat while catching a groove. LiBeach was perfectly placed in the middle of the festival, with the iconic banana trees adjacent to the stage, giving the launch party a picture-perfect vibe.

If you wanted to enjoy the music from the water in a floaty, easy. If you wanted to get in the mix and dance in the crowd, done. The world was your oyster, and starting the festival with the DH crew catapulted my energy and excitement levels to the moon. Having attended EDC Las Vegas the weekend prior, this was exactly the reset I needed. A quick dunk in the lake paired with some funky tunes from the Desert Hearts maestros got me right where I needed to be to take on the next three days of LiB.

Thursday was booked full of talented artists, and I found myself at the Grand Artique most of the evening after getting warmed up at the Desert Hearts launch party.

OFIER played two sets on Thursday. One at The Junkyard and another late night at the Grand Artique. While both were phenomenal, his Grand Artique set was one to remember. OFIER seamlessly goes from mixing melodic and euphoric house and techno tracks to ripping the guitar over the mix. It is a beautiful blend of electronic and live elements that make his sets engaging, exciting, and constantly evolving.

Kaipora drew one of the largest crowds I have ever seen at the Grand Artique, and their unique blend of live instrumentation and bass music was very well-received. Ronnie is an alien with impeccable rhythm. He does all the drumming live on the launch pads, mixes up the tempos, and plays basslines on the Akai mini. Kevin adds rhythms and bass to each track while also freestyling and rapping.

They performed with McFiddles and vocalist Embher, bringing a palpable family vibe to their set. They performed such an inspiring set that by the end, audience members made it on stage to dance, hoop, rap, and add their special craft to the already fantastic performance. Kaipora brings something new to the experience each time, and that will always keep my interests piqued – don’t sleep on your chance to catch them in the future.

One of my favorite things to do at Lightning in a Bottle is to eat – and there were loads of delicious vendors to choose from throughout the festival.

There is cuisine from every culture and for any diet at LiB, so no matter what, you can keep your body full of nutrients and dance the night away without feeling like you’re running on fumes. My strategy is to find the shortest line and get something I can eat on the go. If I am trying to treat myself, I’ll get something and sit down for a minute, but I am usually on the move.

The first thing I munched on at Lightning in a Bottle was Dump City Dumplings. There were three different dumplings, and they only cost $5 each. I tried them all. My favorite was the Pad Thai-Vegetable dumpling, but the Chinese Style Pork and Four Cheese gave the former a run for its money. Of course, if there is a sauce, I will try each one, and they have a variety, including peanut, cilantro, and regular soy.

I also ate at Notcho Fish Taco, which sold delicious fried cauliflower tacos with all the fixings that would make you forget you weren’t eating an actual fish taco. Pierogi Posse was also very enjoyable as they were cheap, quick, and tasty. Not to mention, they were always playing the jams while waiting for your order.

Food wasn’t the only thing that nourished my soul over the weekend. I reunited with my 2019 Lightning in a Bottle family, and we gained some new festival family members this year too!

Something we have been deprived of most over the past two years is a connection with each other. Lightning in a Bottle was a reminder of how important community, support, love, and connection are to being happy. I always come back rejuvenated from Lightning in a Bottle, and the music strongly drives my experience. Still, the connections I make and the people I’m able to spend these special moments with make the festival experience more impactful.

It has also been a couple of years since I did a camping festival with my brother. We’ve had so much fun at previous editions that the festival has become a tradition. It’s always something special to look forward to, and I feel very grateful to have music as a bonding interest. Being able to share what I love with the people I love and meet more people to love makes Lightning in a Bottle such a magical place for connection. The energy is contagious and fills me with joy anytime I think about it in the present.

When it comes to new music discoveries, I have to give it to Blu DeTiger, who funk-ified the Lightning Stage on Friday.

After hearing of Blu DeTiger from her recent collaborations with Chromeo, I knew I had to see her at Lightning in a Bottle. She played Friday at 6:15 PM on the Lightning Stage, and it was dancey, polished, and an all-around good time. She played her recent releases like “Hot Crush Lover” and “Blondes” as well as a plethora of tracks from her catalog like “Figure It Out,” “Toast with Butter,” and “Cotton Candy Lemonade.” Not to mention, she gets to jam with her brother because he is the drummer, and I think that is very wholesome.

My weekend ended with one of my favorite artists, SG Lewis, performing on the Lightning Stage. He released his debut album times in 2021 and performed it online during quarantine but has finally been able to take the show on the road this year. Whenever I see SG Lewis, I find something new to love about the show. Whether it’s the guest vocalists he brings out to sing tracks like “Hurting” or “All We Have Is Now,” or the energy he exudes while performing, his pure enjoyment of playing music never ceases to amaze me and get the crowd juiced.

As far as music goes, it’s well worth saying that Chet Faker and Glass Animals also put on some of the best shows on the Lightning Stage. Their set list curation spanned their entire discography, the visuals added another dimension to the performance, and the sound was proper where I was standing in the front right. I also feel I need to give a huge shout-out to Hello Yes at the Grand Artique.

Mitch Bell and Aaron Leibowitz, the saxophonist and guitarist from ZHU, debuted their new project called Hello Yes at the Grand Artique, which was sensational. They have one EP and a few singles released, which they played live for the first time, but they must have included a handful of unreleased tunes and heavily jammed because it was another case of the “I haven’t heard this, but it’s everything I want to hear right nows.” If you haven’t checked out their music, I highly recommend it and stay in tune with what they are cooking up because it sounds great!

This edition of Lightning in a Bottle reminded me of why it’s one of my favorite festivals to attend each year, and I look forward to returning next year.

Lightning in a Bottle is all about good music, new friends, and a lifetime of memories. Most of the time, you come back low-energy and uninspired after a festival, but there is a magic about Lightning in a Bottle that invigorates you. You can camp in 105-degree weather for five days yet come back feeling refreshed because the people, nature, musical vibration, and general energy exchange leaves our spirits aloft, fluttering in whimsy.

It’s important to remember those feelings and channel them into our everyday lives to make them better and keep you going. Until next year LiB!