Get to Know the Dark, Spooky Style of sharlitz web 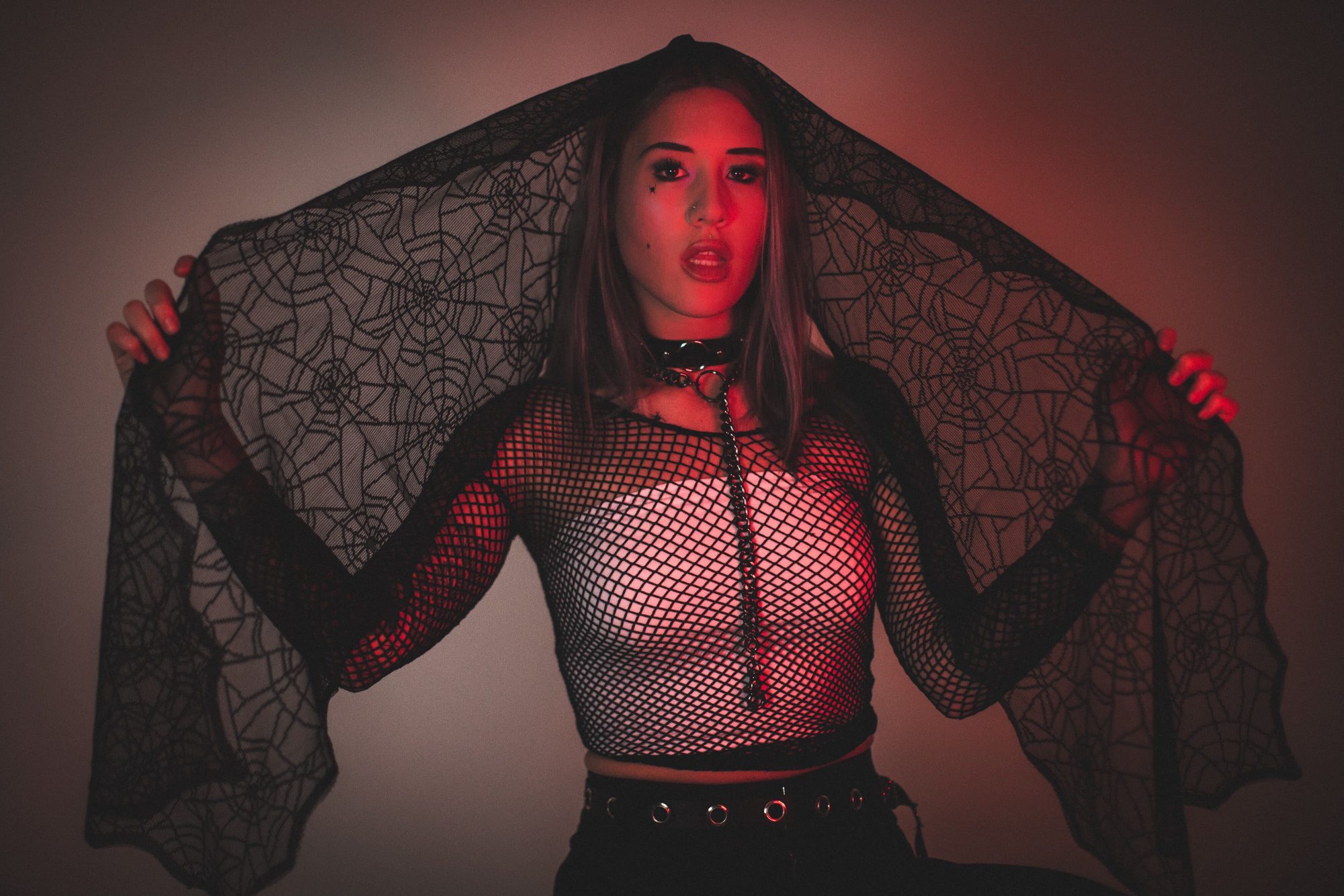 sharlitz web is an artist on the rise who is making quick moves with her unique sounds, and we got the chance to pick her creative mind.

Over the last year, there has been an immense rise in the underground with fresh talent coming to the surface. In fact, if there was ever a time to immerse yourself in new sounds, that time is now, and one of those artists that made fast strides is none other than sharlitz web. Her forward-thinking sound design has grabbed the attention of listeners that love that deep, haunting style and made her a producer you need to keep an eye on.

Tracks from sharlitz web such as “Creatrix” and “Dark Places” perfectly highlight the mood and energy she brings to her passion. And that passion has already landed releases on WAKAAN with the Spider Cider EP. Blending 140 and other slower BPM styles within her experimental sounds, everything she puts out will have you craving more. If you’re someone who always ponders what lurks deep in dark places, sharlitz web has the answers for you.

Looking to gain some added insight into the mind of this rising star in the scene, we jumped at the chance to sit down with sharlitz web. So read on to learn even more about her background, recent releases, and future plans, and let her music take over as you enjoy this exclusive mix that she put together for us.

Hey sharlitz web, thank you so much for chatting with us! First off – I’m a huge fan of “Dark Places” with SSKWAN and the more recently released Spider Cider EP with WAKAAN. These being your first releases with each label, how would you describe the sounds you bring to the WAKAAN/SSKWAN rosters?

Thank you so much for the support. I want my music to weave in and out of found sounds, such as eerie landscapes from other realms, sounds that bleed a little bit of detuned jazz/blues flute, floating melodies and warm fuzzy sub-basses, sounds of distorted cognitive thoughts ripping through audio manipulation and resampling, aggressive reese basses that creep up on you, and then followed up by some kinky sine waves. [Laughs]

Ranging from the ominous lull of “Dark Places” to the sizzling pops of vibey bass displayed in Spider Cider, I’m astounded by the versatility of your sound. Can you take a deeper dive into your technical and creative processes of producing Spider Cider?

Spider Cider was more of an experiment where I played around with my current emotions and twisted them to represent the yin and yang inside of me. I want people to know that as dark as my music can get, I could never fully extinguish the light in my soul even though I wanted to many times—my angel sister won’t let me.

For the technical side of it, I wanted to portray a more playful, energetic side to my production. For ‘Ill Will’ I wanted to capture a hard-hitting hip-hop beat, emphasizing the 808 and building around that. For Spider Cider I chose to write in a major scale and took a more melodic approach for the intro leads and breakdowns.

You’ve stated “Dark Places” was inspired by the emotional turmoil you felt after the passing of your sister. Have the rest of your releases thus far transpired via similar creative processes, or is there another method to the madness when it comes to starting a new track?

Most of my previous releases have stemmed from the depths of my grieving. I used music as my own form of therapy and sunk so deep into it that I forgot how to express myself in any other way at first. From that, I realized it wasn’t healthy and took initiative to start making changes to open up my creative process.

When I write something from that dark place inside of me, I find a lot of comfort in Charlotte’s energy. The madness involved in my process is also me sound designing for hours on hours. I’ll watch YouTube tutorials and then try to focus on me in the present moment and ask myself, “How is Grace feeling in this exact moment?” and just go from there.

I know “Deep Dreams” is a bit of an older track, but I love the hauntingly deep and dark energy this one gives off so I have to ask – what did the creative process look like behind such a beautifully ominous track?

I’m happy to hear you enjoy that tune! ‘Deep Dreams’ was a representation of the nightmares that I was continuously having for a little bit. It was as if this creature was continuously chasing me into this really dark, isolating place. It wanted so desperately to take me as a prisoner to my own art. The first drop was me coming face to face with it and it was trying to scare me into a corner. The 2nd drop was when I decided to run away from it using the kick drum pattern as my footsteps.

Are you currently based in Chicago or LA?

I am originally from Chicago but right now I’m based in LA. After my sister passed away I really wanted to get out of Chicago and start a new chapter of my life. I was nervous coming out here by myself but 100% put my trust in my vision. The people I’ve met out here are truly some of my best friends and they continue to inspire me every day, and for that, I am very thankful.

How would you say your creative processes and progression as an artist change based on your environment and the variations in different states’ music scenes?

It’s not so much the different states that have influenced me from my own personal experience but I do believe the environment you’re in does heavily influence you. It feels nice to be inspired. My creative process flourishes when I’m feeling inspired and in an environment that easily sparks inspiration.

I also feel like an ‘environment’ is the people that you’re around, the people you talk to, and the people you work with. When I work with other artists, any kind of artist, I am always left feeling inspired in some sort of way. As humans, we adapt to our surroundings so my creative process can most definitely get affected by things/people/experiences etc.

Since I know you’ve been a fan of bass music for quite some time, who were some of your favorite artists at the start of your production journey, and are any of them your current influences or have those changed?

Ivy Lab, Tsuruda, Mr. Carmack, Noisia, CharlestheFirst, Champagne Drip, DMVU, ESQ, Dr. Derg (RIP), Eprom, Skrillex, Zeds Dead, Lindsey Stirling, Of the Trees, KOAN Sound, Liquid Stranger, Sumthin Sumthin, G Jones, Hydraulix. Those are just some of the first artists that pushed me deep into the direction I wanted to take with my music. I definitely am still a huge fan of all of their production and they all endlessly still inspire me.

The pandemic obviously left the music industry at a standstill and continues to impact artists everywhere. Do you believe this time was productive to your artistic growth? What was the biggest challenge you faced as an artist during quarantine?

At first, it was extremely productive for me. I was feeling very creatively free to be able to stay at home and work on music once the lockdowns started. I definitely feel like this past year and a half I’ve had a lot of growth in my music, as well as physically, mentally, and spiritually. As painful of a time as this has been for everyone, I feel very blessed for the opportunities that have come my way, as well as having gone through all the ups and downs. It’s pushed me out of my comfort zone and broke me down to where I was able to rebuild myself.

After a few months of that, I was hit hard with writer’s block – one of the worst I’ve ever had and it was because I was spending too much time in my own space. The places that I would find inspiration such as shows, hanging with my friends, traveling, socializing, people watching, eating food in a cute restaurant, going out, were all halted and it became hard to find inspiration very quickly which sucked.

Though the weird wubs have your heart, I know you’re interested in morphing genres and experimenting with other sounds. If you could pick any artist in any genre, who would you want to work with in the future, and do you have any collaborations in the works just yet?

​​I’ve been finding a huge amount of inspiration listening to Massive Attack recently. Implementing more instruments and vocals is definitely something I want more of in my production.

I also admire Billie Eilish’s work. The fact that she can be as creepy with her vocals and then so deeply soulful is something that resonates to the inner depth of my soul. ‘Lost Cause’ and ‘Oxytocin’ have been on repeat since her album dropped.

Lately, I’ve been working more on some solo stuff but yes, I do have a couple of collabs in the works and I am feeling inspired by them as well as excited with the way they’re sounding.

Now that there appears to be a light at the end of the tunnel in regards to COVID, can we expect to see Sharlitz Web live in 2021?

TBA [Winks] To the fans – let us know where you want to see me play! My booking agents will be scoping the comments hehe

Finally, here’s a little fun question for you because with a name like sharlitz web, I have to ask – if you were a spider, where would be your favorite spot to build a web?

I would weave a nice little hammock and post up next door to Spider-Man so that we could take over the world together.