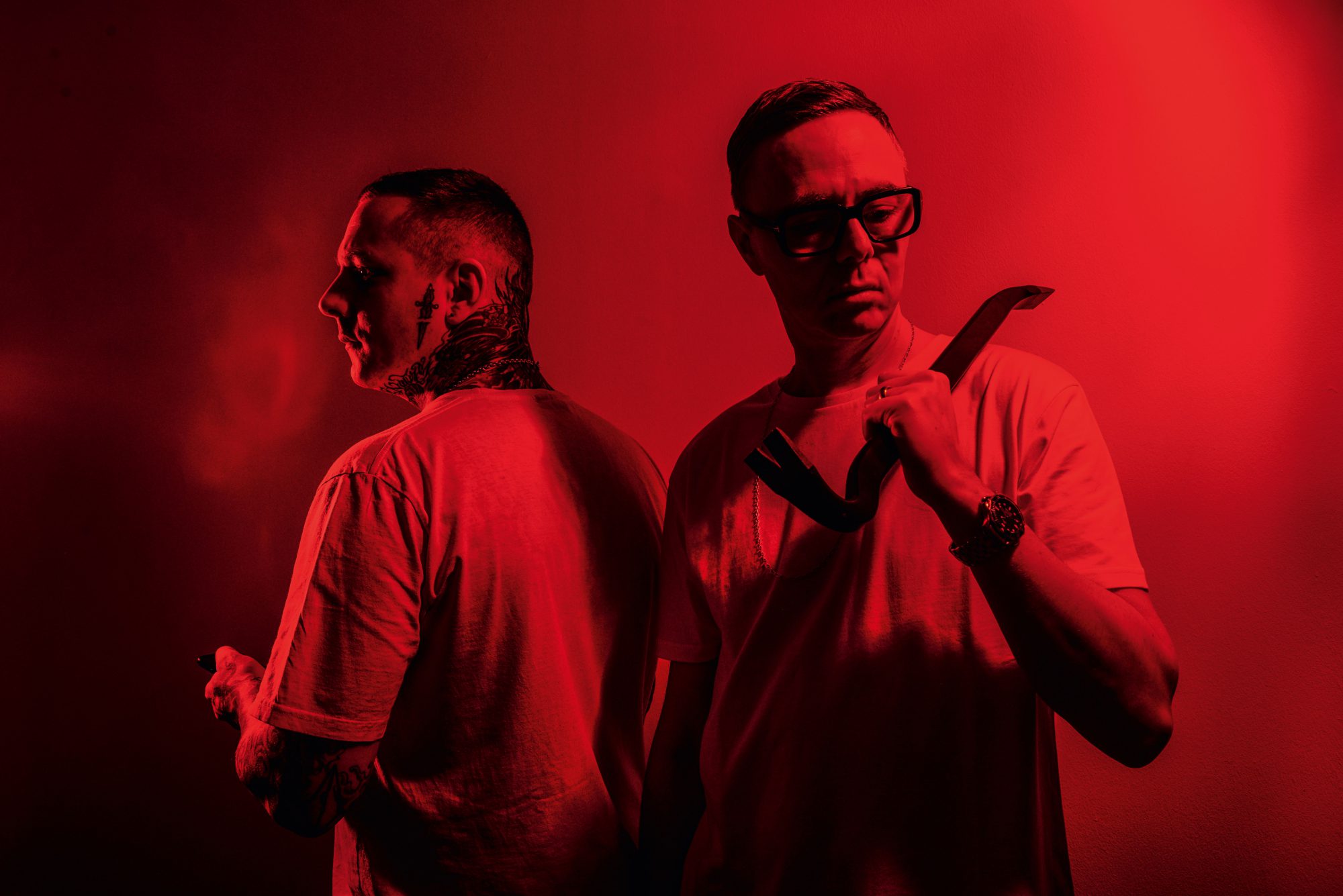 Killbox takes us deep into the world of dark drum and bass and chats about Divine Profits, their latest release on RAM Records.

While Ed Rush and Audio are each established dons of the drum and bass scene in their own rights, their collaborative project Killbox has itself also emerged as a powerhouse act. Beginning with their first release under the alias, Pleasure Palace, which found a home on RAM Records in 2018, they’ve continued to provide proof that it’s possible to push the frontiers of the genre while still paying homage to its fundamental structures.

Now, the legendary drum and bass duo have released a monstrously powerful new album on RAM Records, Divine Profits. The album takes listeners on a journey through the tangled dark web of societal greed, using gritty sonic elements and growling basslines to add emotional weight and movement to each track. With Divine Profits, Killbox firmly sets the benchmark for what we should expect, and hope, to hear from the DnB community as we enter the post-COVID era. Dust off those moshing shoes before you rinse these tunes – you’ll thank me later.

Looking to gain some extra insight on their latest album, we jumped at the opportunity to chat with Killbox and pick their brains. So listen to the album on Spotify or your preferred platform, and read on for the full conversation!

You seem to provide many layers of interpretation for the keen observer with this project. Starting with the title itself, I noticed you used “profits” (instead of “prophets”), which seems to point to a cheeky twist on divinity and religion (in contrast with the more hedonistically titled Pleasure Palace). What was the intended significance of this?

Audio: We spelled it this way as a little play on words in order to highlight all the corruption in the world, with a lot of it coming from the so-called religions. And yes this LP is juxtaposed to the Pleasure Palace project, well spotted!

Ed Rush: Yes, everything is centered around money, from capitalism to the brothel to the church. Where there’s money there’s greed and corruption. This concept ties the two projects together perfectly.

Building on that, the song name for the latest single off the LP, “Rodan,” is a reference to a mythological Japanese monster, or kaiju, whose cult classic influence was almost on par with Godzilla. What was it about this track that led you to this title?

A: The monstrous bassline [Laughs], and the eerie intro textures that sound like there taken from a Kaiju hideout, plus I’d just watched the Godzilla movie so…

E: The name suits the track perfectly. Rodan ‘a giant monster from the sky’ needs a dark DnB theme tune so we made him one. It’s one of those things where when you hear the right name it just can’t possibly be anything else.

You are each considered to be monumental influences on the DnB scene, with highly respected careers that span decades. How did you meet and why did you decide to come together to create Killbox?

A: We met through my earlier solo work on Ed Rush and Optical’s label Virus Recordings, and formed a good friendship, from there we played a couple of b2b shows that were sick so we decided to take it to the next level and produce some music together.

E: It was the Bad Company UK reunion at a Fabric show where we played a b2b which spawned the idea. I have always played Audio tunes from day dot so I jumped at the chance to make tunes with him.

Both of you, Ed, in particular, are known for really birthing and pushing forward the techstep and Neurofunk sounds. Neurofunk DnB seems to particularly be having a moment in the electronic music zeitgeist this year. Does that affect the way you approach your productions now?

A: I don’t really worry about what the rest of the scene is doing and especially try not to let that affect what I’m writing, I think the style of DnB we make and DJ will always have a place, the energy is undeniable and what that brings to a club setting is magic.

E: No. I think we’ve always made the kind of music we want. Things are always changing and this is one of the traits that keeps DnB interesting. Producers aren’t afraid to push boundaries and challenge the listener. At the end of the day though, it’s all DnB. Styles and flavours come and go, some get reborn and revisited by the next generation but we all love the same thing basically.

Speaking of your independently built empires, I know Ed Rush has his label Virus, and not only does Audio have his own label, Snake Pit Records, he’s released multiple albums on Virus too. Why did you decide to use the RAM Records platform for your Killbox works?

A: We felt it needed to be somewhere separate from our own labels and history, a clean slate to push a new project, plus I’ve known Jim the label boss at Ram for years and have a great relationship with him and the team Hannah and Wayne,so it just made perfect sense.

E: Yes, a clean slate for a new project sums it up nicely.

Many electronic music commentators have put forth the assertion that the album format is ‘dead,’ and that for contemporary underground artists it’s all about EPs and/or a singles-release-based growth strategy. Yet, you have chosen to still use the album model. Is this something you consciously decided and what are your thoughts on the modern move away from full albums in electronic music?

A: Personally, for me, albums show what an artist is really about so it’s always something I’m going to keep doing regardless of everyone else’s plan, what can make an artist special is hearing them take their sound into different realms which are only possible on a long-player.

E: I too like the concept of an album as an artist for the same reasons – it allows you to explore different textures and styles which is always fun and I think essential to keep making music interesting. We have staggered the releases from the album gradually so they could be digested in stages rather than expecting people to absorb the whole body of work in one go. This helps pave the way for the project to have a bit more longevity naturally.

Finally, what is the biggest change in the DnB scene that you’ve been surprised by and what do you think the future of DnB holds?

A: Covid! that’s the biggest, the sudden stoppage of all club shows and festivals has been DnB’s biggest test to date, so the re-opening of those are the future, we need to get back to socializing it’s vital for a healthy mental state.

E: Yes. The closure of clubs has definitely been the biggest change I’ve ever seen. It’s going to be mental when we finally get back to raving, I think we are all going to appreciate it so much. I really can’t wait to feel the sensation of bass again. You can’t beat that feeling of being enveloped in rich warm bass with your internal organs being moved around!