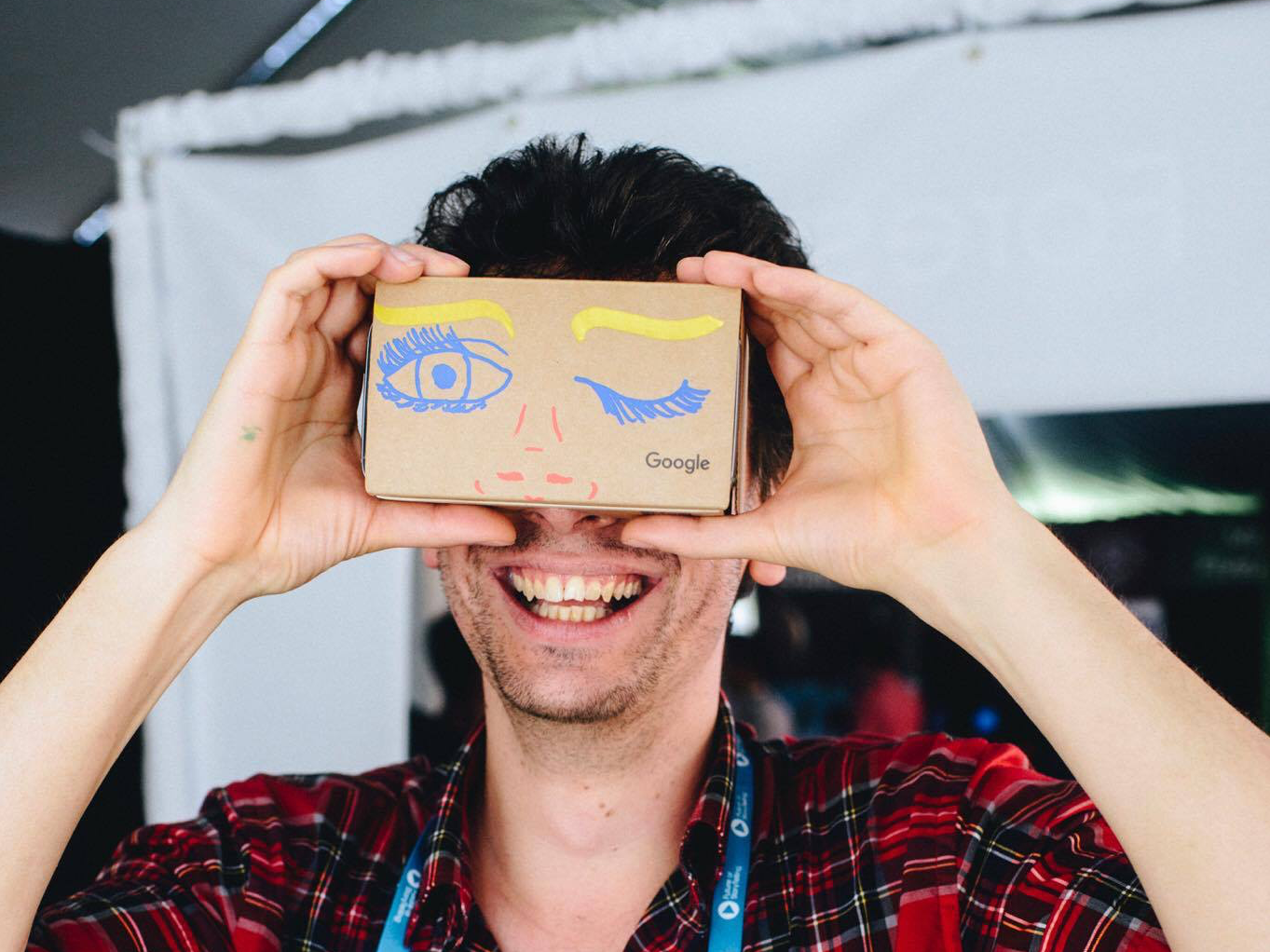 Electric Offense Co-Founder Roman Miletitch sat down to chat about the past, present, and future of their platform and the world of VR.

In this time of COVID-19, the music industry has found many creative ways of supporting artists and fans. There have been numerous live streams on Twitch and various similar platforms and the new wave of drive-in events, but neither truly captures the essence of being in a club-like setting quite like Electric Offense.

What started as a desire to showcase in-person audio and visual events in a pop-up like fashion became this immersive streaming experience. Electric Offense, as it exists now, is all about having music fans enveloped in a 3D world while enjoying their favorite tunes played live by artists they love.

It’s not just the 3D aspect that sets it apart from the other avenues but the immersion that comes from being able to speak with your friends, dance to the music through the motions of your avatar, and engage with the environment by drawing or importing 3D objects. Want to experience it yourself? Then check out their upcoming event, Electric Virtual #10 on October 17.

Ahead of their next event, we sat down with Roman Miletitch of Electric Offense to gain more insight on this unique endeavor that’s easy for anyone around the world to access as well as what the future holds for the platform. Read on for the full conversation!

Hi Roman, thanks for chatting with us today. You started the Electric Offense project in 2017 and it’s changed forms throughout the years; how did you come up with this idea in its current form?

I need to thank Fabien (@utopiah) for that, he approached us when Electric Offense (E.O.) was in an in-between state. From its inception, E.O. was about organizing “real life” events, specifically in Brussels. As this weird situation unfolded, we couldn’t do in-person events anymore and most of its members weren’t super into doing something online. Still, we started exploring online lives, but personally, I wasn’t fond of this form as a way of expressing myself.

Then came Fabien, back from a party in VR, who pushed the idea, which I directly fall in love with. He joined the team, we pushed the concept, and soon after we were lucky to book With:LoV, aka Ann LoV, from the UK as our first DJ from outside Belgium. She connected strongly with the concept and joined the team to take care of artist curation, something we could never have done without her as our reach was now global and not anymore restrained to just Belgium. Since the launch of the virtual events, we have had artists from the Netherlands, UK, Canada, Sweden, Belgium, and France.

Let’s dive a bit deeper into Electric Offense. What technology is used to create this virtual world?

We’re relying on Hubs from Mozilla for the whole structure. We wanted something very accessible, open-source, and that we could tinker with to make our own. I was overjoyed to find that Hubs validated each point. To be honest, without them, I don’t think we would be organizing online events anymore! I’d advise anyone to play with this technology, the entry barrier is surprisingly low!

Not to delve too much on technical details, but Hubs is a web platform, meaning that anybody can access from any device as long as they have a web browser installed. This was very important to us, in order to not limit ourselves audience wise, as the friction to enter virtual events is pretty high since those events are still very new to people.

Most viewers at this time access Electric Offense via their computer but there’s a possibility of using Virtual Reality devices. What difference in the experience of accessing via the computer and the VR device?

Hmm… it can be summed up in a word, though a bit too easily used in the context of VR. It’s all about immersion. When you’re on the computer, it feels like playing someone who is at a party, which is already pretty fun. But when you’re in VR, you are yourself in a party. The suspension of disbelief kicks in, and you don’t focus anymore on what you’re seeing, on the interface, but on the experience itself. That plus hands. In VR, your controllers are your hands, allowing you to interact and manipulate objects in a more natural way. For instance, this makes drawing way more fun, especially while dancing!

What makes it different from other virtual platforms or streaming services?

Many new platforms are exploring new ways to consume music online. Streaming often feels a bit disconnected, both from the artist playing in his own space and from the other spectators that you can usually only interact with by chatting. Here you’re present in a 3D space, it’s all about being at a party, its interactions, and the people around you.

From my experience, the sensation of being in a crowd is stronger, while of course in no way comparable with real life. You can interact with people in a lot of funny little ways, or directly talk to them and dance with them.

Other platforms can be only VR or only mobile. Using the web allowed us through Hubs to not constrain ourselves to one or the other. Of course, it introduces new limitations, but that’s our job to play with them!

When I attended one of the sessions, I was introduced to many features such as drawing and drag-and-dropping objects, Can you tell us about what other types of interactive features are included?

There are quite a few, and always evolving. Would that be the ones the folks at Hubs are developing or the ones we are taking care of personally at Electric Offense.

For now, the three mains interactions are drawing (in 3D or on walls), playing with 3D objects or GIFs (importing them, moving them around, sharing with friends, or placing them in space to create a specific scenography) and the social layer. Since the audio is spatialized -think of it like real life. If you’re far, I can’t hear you, so people tend to form little crowds to discuss between them like in a real party. And since its such a sandbox space it always creates quirky little games between people!

From there, we either build on these interactions, like a dance performance from dancers with VR headset or a 3D bartender that creates on the fly a 3D object for you based on your description, or we push forward. For instance, with on-site 3D VJing with elements flying all around the room.

Since you have had quite a few virtual events already, we’re curious what artist and fan reception has been like so far?

I’d separate the reception in two, people that came and … well, the others! As mentioned earlier, the friction toward joining an online event is very present. So it would be an understatement to say that the reception to our online events was lukewarm. We reached maybe 10% of the number of people we reached in real life with our past events.

Now, for people that come to our events, that’s a whole different story. They are very surprised about the possibilities, the playfulness of it, the wonder of exploring a new little world. Some stay a bit quiet in their corners and others move around to explore every pixel of it, every possible interaction. A lovely mess.

For the artists, we wanted from the start to connect them into the space. Not just to have a live stream in the room, but to have them understand the concept and have a virtual presence in the room. A possibility to connect to their audience, to see them react in real-time, to see them experiencing the music, and share it back. Most of them were very positive about the concept and we’re already planning to book quite a few of them anew!

You’ve teamed up with Mixcloud to create these interactive musical events. What about the platform made you want to collaborate with them?

We were extremely lucky that Mixcloud let us experiment with their Live technology. Same as with Hubs, I’m not sure what we would have done without it! At the time, from our understanding, it was the only way to do what we wanted to do in a legal way. Besides the tech, we align with the values of Mixcloud and we’re curious to see how this will evolve in the future.

How has the current situation with COVID-19 positively or negatively impacted your work?

Well, both I guess. In the case of real-life parties, it just destroyed it. But for online events, that’s the reason/occasion why we’ve been starting it! Our online events are both affected by COVID-19 and the outside average temperature. I mean, we never think to compete with real-life parties or to be an ersatz before being allowed to have them again. We aim to offer something different, of value as a stand-alone experiment. Even if the main reason for its inception was indeed COVID-19.

As the project expands, what features are you thinking of adding?

Right now we’re focusing on having a stable experience for everybody. From there, our focus will be on the visual, both of the club and of the effect while the DJ is playing. Then a focus on the experience itself, like what other interactions can we propose to our users to make it something they could never experience in real life. We want to be stable enough to allow ourselves to be crazy from there. Part of the crazy would be to create our own little open-source VJing library for Hubs virtual space. Not just to have little effects, but a whole vocabulary to express ourselves

Something I’m really curious about exploring as well is this notion of virtual space. It’s our own, let’s use it. For instance by connecting it to other spaces, or adding spaces in the virtual street in front of our lobby. A way to give visibility to other projects that share the same value as we do. Our next step in this direction is to organize a virtual exhibition in the club and its street. We’re already in talks with a digital artist to organize its upcoming first virtual exhibition. It’s all about sharing back with the community.

Finally, how do you see Electric Offense evolving over the next five years?

To be honest, the only way to answer that would be “I have no idea” seeing the transition we had to do over the span of a couple of months. It will depend a lot on how the team evolves and what its desire lies. For me, I’m hoping to push this concept forward, making it a platform not just for us, but for others to reuse freely. And once we can have parties in the real world again, to mix both projects and have the same party both in real life and in the virtual space with enough bridges between both for it to feel like the same party. That’d be pretty cyberpunk.