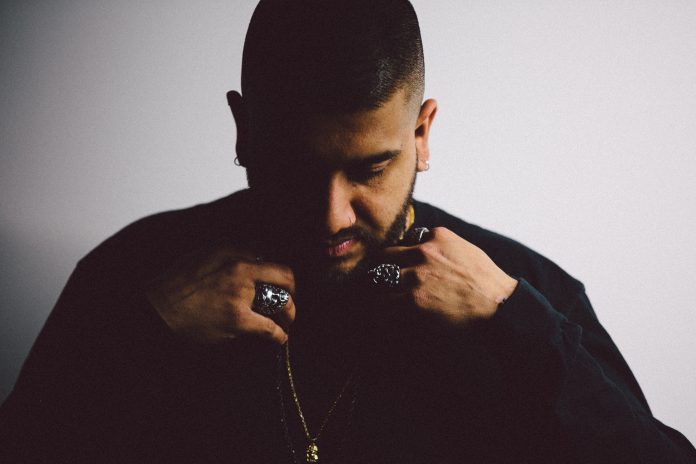 After dishing out his delicious new track “Hold It Down,” we caught up with rising UK Garage artist Yumna Black to get a piece of his mind!

From DnB and Dubstep to House and Trance, some of the most notable DJs and producers in the electronic music scene have roots in the United Kingdom, and Yumna Black is looking to help carry on that tradition. Hailing from Leicester, this rising UK Garage artist has continued to create party-worthy tunes such as his latest single “Hold It Down,” which was recently released on Wang Records‘ Avirex Airwaves 2 compilation, as well as becoming a valuable member of the Beastwang crew.

In fact, upon digging into Yumna Black’s previous releases it’s clear that he’s begun to churn out some groovy garage gold. His pursuit of bringing forth smooth beats laden with jazz influences has already begun to gain recognition, and due to the pandemic he’s been hard at work in the studio to keep fresh releases coming on the horizon. Of course, once live shows officially return he’ll be making crowds move in all the right ways on the dance floor with his remarkable stage presence as well.

While we continue to hold it down at home, when the opportunity to get inside the musical mind of Yumna Black presented itself we couldn’t help but jump at the opportunity. Take a listen to his latest tune below, stream Avirex Airwaves 2 compilation on Spotify, and read on as we dive into the realm of this UK Garage artist’s creation.

Stream Yumna Black – “Hold It Down” on Spotify:

Hi Yumna Black, thanks for chatting with us today. The music scene has been forced to adapt during the pandemic. What has your experience been like and how have you stayed motivated during this time?

Hey, it’s a pleasure, thanks for having me! I think in times like this you have to look at the positive side of things. I kinda see it as a little home holiday haha. The whole world was on lockdown. It’s the best time to do everything that you say you’ll do tomorrow or you never had the time for. Especially the time for yourself. Also Audible has been a blessing, I find it hard to sometimes sit and read a book so that’s been a lifesaver for me, it gave me a feel for mindfulness and I’m fully attached to it.

You just dropped a fresh new single, “Hold It Down,” on Wang Record’s Avirex Airwaves Vol. 2. We really dug this tune right off the bat with its wubby bassline and sexy flow, and the vocal samples that complete the dynamic. Can you elaborate on the production process of the song? What’s your workflow like in the studio?

[Laughs] I like the way you described it! “Hold It Down” was the quickest track I’ve made, it came together in a couple of hours and I really enjoyed making it. I didn’t have a concept or an idea in mind, I was just flowing with whatever was happening, it’s probably the simplest track I’ve made too. I don’t really have a set workflow, but I usually start with drums or chords, from there I kinda start to develop where I want to take it.

While some artists have been playing livestreams and working on tracks, others have found it difficult to be creative. Have you faced adversity in the creative process since the pandemic began?

No not at all, just before the pandemic began I opened a cocktail bar called Sophy. With being very hands-on with the whole process of opening, it didn’t leave me much time to make any music. So when the pandemic happened I was able to spend more time on producing, I also was able to find some amazing new music, for when events start I’ll have some fire to play!

Live indoor shows are returning to the UK soon and festivals have begun to be announced again in other places in Europe like Malta. What are your thoughts on their return as the presence of the coronavirus still remains throughout the world?

I think it’s a massive risk, I understand why events are returning and I know people are itching to go to a festival or event. But we all know how hot and sweaty they can get right?! I guess we don’t know all the full details so we have to base it off what the officials are saying, I just hope people are safe and festivals are doing as much as they can to minimize the risk.

Let’s dig into your history a bit! Considering you’re a UK native, we can only imagine you were exposed to dance music and rave culture early on. What was that scene like growing up in Leicester?

At the time there wasn’t really a scene for the genre of music I was into, being younger at the time I had more of a taste for the harder spectrum so I had to travel out of the city to go to certain events and festivals. The main festival that really got me hooked was Outlook, what an experience that was. From there on I started looking for more like-minded people in the city, I also believe that year was when Nico started Beastwang.

How did you first get involved with Beastwang and Wang Records, and what has their support meant to you as a growing artist in the scene?

I played my first set for them in 2013 and became a resident in 2016. Then in 2017 I joined the Beastwang team and saw the birth of Wang Records. It’s been an amazing journey, the support from the team is amazing, we’re a proper family now. Massive shouts to Nico Singh too, we’ve really pushed each other the last couple years. His support has really helped me the past year for the better!

While listening to your discography, there’s a jazzy, soulful essence that seems to balance the energized basslines in most of your tracks to really make your sound stand out. Who were some of the first artists you listened to that led you to develop a passion for UK Garage?

I think I was about 15 and I heard a mix or something (possibly Rossi B and Luca) and there was this track playing which the bassline was so distinctive it blew my mind. I was just getting into UK Garage at that time and I was hearing so many different sounds and tracks but this track I spent a lot of time searching for, it was always in mixes and MC’s always used to get so hyped on it. I ended up finding it six months on I think, but the track was DJ Narrows – Saved Soul, what a bassline?!

Another vivid memory I have of UK Garage is a couple of months on from the above but I had to go with my parents to drop my brother off to London for University. We were in London on a summer’s afternoon waiting in traffic (as you do), next to us was this blue BMW E36 with its windows down blaring this unknown track to me at the time, the vocals coming out were amazingly smooth with an ear-catching synth. I was in love.

As the car started to move I wanted to hear more of the track but as the traffic started to move I wasn’t able to grasp enough of it – that’s a track I missed for a while. Until I stumbled across it in a Pure Garage CD. MJ Cole – Sincere, from then on there wasn’t a time I would go without listening to a Garage track or playing it out.

Finally, if there’s one thing we need more of right now, it’s more of the Yumna Black sound. Can we expect more releases or anything major in the coming months from you? What goals do you have for the rest of the year?

Lovely to hear that! I’ve got a proper champagne bubbler track coming in August with our host/MC Kurly from Beastwang, I’m really excited about that thinking about it gets me grooving I can’t wait! I really want to release a body of work showcasing my eclectic sound, so you might see an album coming from me in the near future.