Despite canceling the physical edition of the festival the Q-dance crew connected over eight million hard dance lovers during Defqon.1 at Home!

This past weekend, hard dance lovers gathered around their homes to celebrate the biggest hard dance festival in the world! When it was initially announced that Defqon.1 would not be taking place for the first time in 18 years, fans were devastating and orange hearts were broken around the world. However, in lieu of a physical event, the Q-dance organizers announced an all-digital festival, Defqon.1 at Home.

Looking to recreate the experience that hard dance lovers who flock to the festival annually would be missing out on, Defqon.1 at Home retained as much of the physical show’s highlights as possible. And while we expected it to be fun and entertaining, what ensued was hands-down the best digital festival thus far!

The festivities started with The Gathering and ended with The Closing Ceremony, and in between, they even had the traditional Power Hour celebration on Saturday as well as a very special End Show. Defqon.1 is known for its amazing stage designs and we were extremely impressed at the fact that the Q-dance crew even built an enormous stage to go along with the digital festival.

“We obviously knew that this year would be different than normal and so we had no idea what to expect. We, therefore, did everything in our power and it’s fantastic to see how many people enjoyed this. This special edition has even exceeded all our expectations. We’re very proud of everyone who made this possible,” said Q-dance Creative Director Jonas Schmidt.

Additionally, there were fun, interactive activities such as daily quizzes and Zoom rooms that got fans interacting with each other. So when the numbers rolled in it was no surprise that eight million Weekend Warriors tuned in to the event as throughout social media there have been fans shouting their praises!

Speaking directly about the outpouring support from the community Schmidt went on to say, “The last three days mark a rare chapter in the Defqon.1. history. We have witnessed extreme levels of dedication and unity in a world that doesn’t allow us to physically connect with each other. You have shown us that the power of an orange heart can conquer everything. It has been a journey we will never forget and we’re very grateful to have you as our fans.”

Check out the video below for the legendary Defqon.1 Endshow, and let us know who played your favorite set from last weekend in the comments! 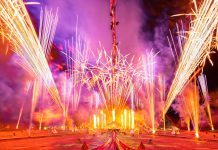 Defqon.1 At Home Smashed Expectations for the Second Year in a Row 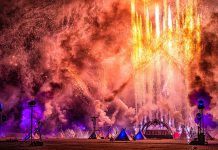 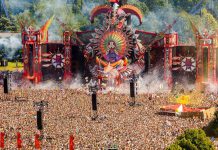 Defqon.1 Announces Its Return in June 2022