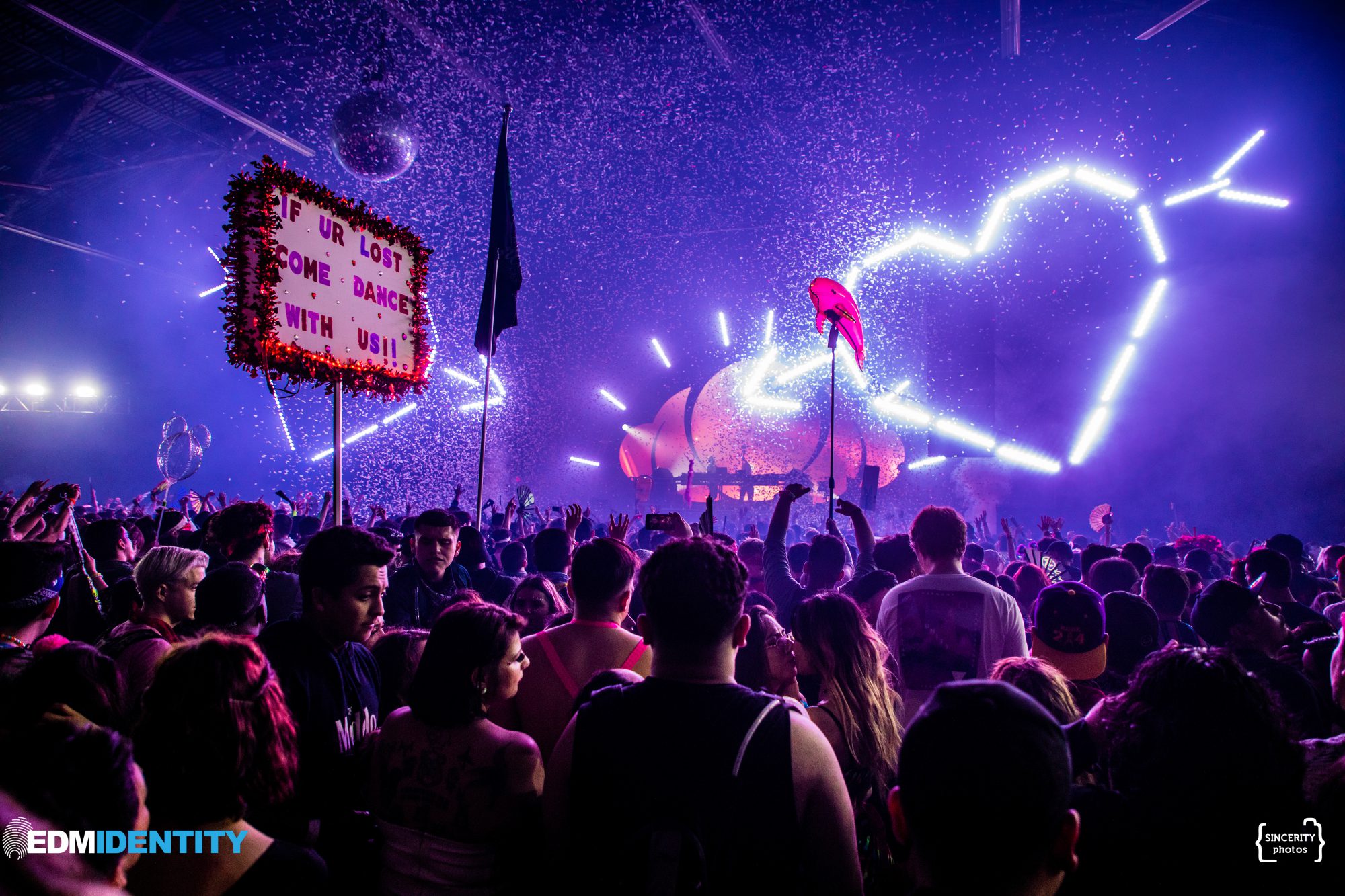 Single pringles had nothing to fear at Crush SoCal because they were surrounded by love and dance music hits all night long.

This month, Crush SoCal returned to the NOS Events Center for a one-night affair of dancing and music, but this isn’t just any festival. No, this one means more to me than most and is also near and dear to my heart. It was the first festival I went to after I had moved to the West Coast, and even though each year I’ve gone alone it’s been absolutely fantastic. This year was no exception.

After arriving at the venue I was through the ticket scanner and security in a few minutes shortly after gates had opened. I walked through the familiar gates and see a giant heart across the pond which was lit up and featured a disco ball at the top. The way the heart sculpture was set up it provided headliners with the perfect photo op from both the front and the back.

A variety of food trucks lined the path to the stage with drinks and merchandise spread out the rest of the way until the bathrooms. The stage was inside one of the familiar hangars of the NOS and I had gotten there just before Blossom started. Walking through the warehouse doors just as the two giant LED heart structures lit up gave me a jolt of energy.

Check out our full photo gallery from Crush SoCal on Facebook!

Blossom’s set was so much fun it really made me wonder what the rest of the night was going to be like.

Blossom played a bunch of house and bass house that really built the mood and her visuals were very on-brand with Blossom from the Power Puff Girls behind her. I really enjoyed her set and it brought plenty of energy to get the crowd grooving.

Next up was Alyx Ander and he carried on right where Blossom left off with his own wave of energy as well. His soulful house blends and bouncy beats had the whole dance floor moving throughout the entire warehouse. A few headliners moved off to the back and sides for their respective flow arts but overall the dancefloor never felt crowded at all, which was really nice.

Ravell brought the room back to more dance hits and rave classics which was then followed up by more house.

I first caught Ravell back at Beyond Wonderland last year and have been a fan ever since. He always brings the heat in his sets and adds in the perfect touch of Latin flair that makes the dancefloor hotter than ever.

This led perfectly into Deorro, got on the stage and blessed us with more bouncy house beats and Latin-infused dance tracks. The production for each artist was solid. Lights and lasers spanned the room while they heavily leveraged the disco balls and heart LED’s. A few times throughout the night confetti would explode toward the crowd happily falling all around.

The whole night went by so quickly but it was happy I was thankful for the memories.

The last two sets from ARMNHMR and Said the Sky were both beautifully incredible. They both pour so much emotion and energy into their sets and were perfect additions to the lineup this year. ARMNHMR is riding off their melodic album that is packed with fantastic tunes and Said The Sky double-downed on those vibes to leave a lasting impression.

Throughout the entire show, you could feel the love in the air. Some of my favorite moments were witnessing two strangers sing the same song in harmony, two friends seemingly become more in the blink of a song, and a couple of glovers that were spreading love through their art. Of course, you can’t forget about the kandi trades reminding me how much PLUR is alive.

Crush SoCal was full of great music and wonderful people that made for the perfect way to celebrate the holiday weekend. Even as a single pringle I was never alone and for that reason and a few others, you’ll probably catch me there again in 2021.

Will you be going next year? Let us know in the comments below!