Win Tickets to Signum Xposed in LA at Garage Gallery!

Intricacy and Lucent are joining forces to bring Signum Xposed to Los Angeles! Will you be there?

Still recovering from Dreamstate SoCal and in need of some classic trance vibes? Well, Los Angeles trance family is in luck as Intricacy and Lucent are hosting an event not to be missed. On Friday, December 7, Signum will be playing a three-hour extended producer and classic set. He will be taking the stage at Garage Gallery with support from Astral, Justin Varma, and Yao.

The defining year for Signum came in 1997, when the duo’s track “What You Got 4 Me” became a club hit and thrust Signum into the musical spotlight. Then followed the demand for more additional tracks along with being sought out for remixes. Signum began remixing some of the hottest tracks for the likes of ATB and Alice Deejay, just to name a few. In 2001 they made their DJ debut in a big way at the iconic venue Gatecrasher. The duo’s success continued and they signed to Armada in 2003 while continuing to release a variety of trance tracks.

Flash forward to 2008, when one half of the duo, Pascal Minnaard, moved to Norway and left the remaining member, Ron Hagen, to continue the Signum legacy live. From there, Signum’s sound became more futuristic and experimental but never lost its trance roots. If you haven’t had a chance to check out this trance legend, definitely do not miss out on his three-hour set!

Tickets are still available to catch this very special set, so grab yours via Eventbrite or enter to win a pair via the contest below!

Enter to win a pair of tickets to the show! 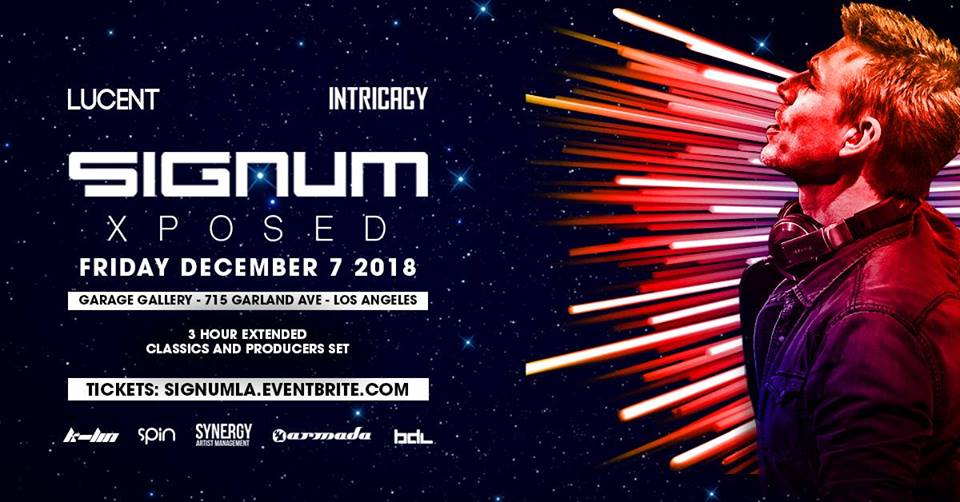 Connect with Intricacy on Social Media:

Connect with Lucent on Social Media: