Tips for Raving With a Chronic Health Condition 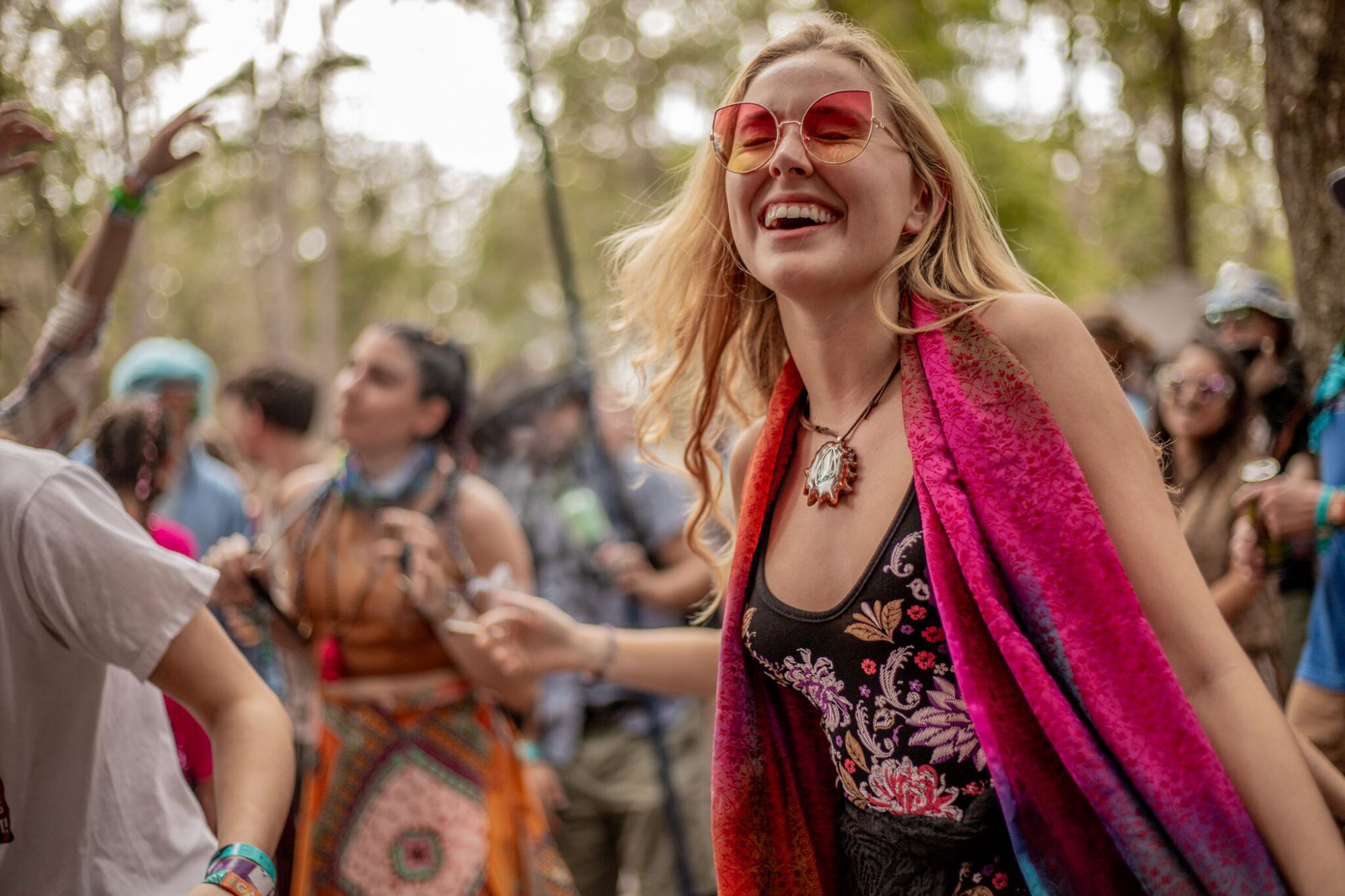 Having a chronic health condition can suck, but it shouldn’t stop you from doing what you love! Read on to learn how an injury changed the way I attend festivals–and the tips I’ve learned along the way.

It was Countdown 2016, the last night of a year from hell, and I was drenched from head to toe. The rain started right around six, and we — a group of five newbies who’d met on the /r/aves subreddit and decided to band together — got there at 5PM, eager to catch as many sets as we could. But the freezing cold and constant downpour were killing our early buzz.

As we snuck into the center of the crowd at the Infinity stage, a part of the tent ripped open and water cascaded down. People screamed, jumped away, pushed each other. Soon after, someone threw a punch, and the back of the tent erupted into chaos.

Watching it all, I began to feel desperate. This night was not going the way I’d hoped.

Countdown was a big one for me. After getting into raving with a sublime Nocturnal and coming back for a barely successful Escape, I needed Countdown to wow me. I needed it to let me give up, to lose control completely, to hand the keys over to whatever was going into my system and let it steer the ride.

More than anything, I needed to have my recent string of bad luck — a car accident in late October, an unceremonious firing days later, months of aimless unemployment, and then another concussion, the fourth in two years — blitzed from my mind. For six blissful hours, I wanted that shit erased.

Soon, the rain stopped and the temperature climbed. More people began arriving. My night perked up. I got intoxicated, then really intoxicated, then way too intoxicated. As midnight came and we said goodbye to the shithole that was 2016, I felt at peace. I reached my hands out toward the stage and made a heart.

Everything was going to be all right. I just knew it.

Heading to my friend’s hotel room a few hours later, my mind wouldn’t stop buzzing. Kinetic energy — lines of color, snippets of thought — bounced around incessantly. I crashed on his floor but couldn’t sleep. I couldn’t stop thinking, thoughts zooming by so fast and in such high numbers that it hurt. And hurt. And kept hurting.

After getting an hour or so of sleep, I woke with a pain that felt like blood vessels bursting in the center of my brain. Then, on the drive back, I started to notice strange imprints on my vision, squiggles that felt like glitches in the matrix. The colors were too bright, there were shiny edges around everything, and the sky flickered like a broken CRT. And after days and days, they didn’t seem to go away. Instead, they got worse.

A few weeks later, with all the same feelings still there, I got an explanation: I was suffering from a severe case of Post-Concussion Syndrome. Most cases are supposed to go away after six weeks, but mine had stretched to ten with no sign of slowing down. And after ten weeks turned to twenty, twenty to forty, forty to fifty-two, there was no end in sight. Those symptoms were now a hair-trigger away, brought on by bumps in the road, trips on the sidewalk, and the tiniest sips of alcohol.

Desperately seeking a cure, I called up numerous headache specialists in my hometown, hoping for some insight. None offered me anything, except for one, who was going through the same thing herself. She recommended acupuncture.

“It helps,” she said, sighing, “but either way, you’ll probably have to deal with this for the rest of your life.”

This is when I realized what I had was chronic. It wasn’t going to go away completely. Instead of searching for a cure, I’d have to learn how to manage what I had and make do. And one of the first things on my list was to learn how to juggle this illness with my love of attending festivals.

So today, I want to share with you some tips that I’ve picked up from attending festival after festival with a chronic health condition.

Now, I’m sure everybody’s experience is going to be different. I can’t even start to conceive all the different possible life-altering ailments that have their own specific effects. Some might be unique to you, or at least extremely rare. It would be impossible to try to address every chronic illness, disease, or injury. My own experience might be totally unique. But hopefully, the tools I’ve picked up might be useful to others who live under the constant threat of unpredictable pain.

A major, life-changing event doesn’t mean you need to quit raving altogether — it just means you’ll have to adapt.

The most important thing is to know your triggers!

In my experience, living with a chronic health condition comes down to recognizing pain triggers and learning how to avoid them. When you’re at an event with 100,000 other people, triggers suddenly become all the more unpredictable. But with these tips, which I use at every event I go to, hopefully, they can become more manageable.

Triggers are just what they sound like: actions that will cause your ailment to flare up caused either by you or by other people. Examples for me range from something as clumsy as a trip to as small as a tap on my forehead. These can activate my symptoms and quickly turn my night sour.

What smart choices can you make to reduce trigger possibilities and still have a good time?

Every type of raver is going to have different needs: shufflers flinging their limbs in every direction might need to have more control; flow toy power-users used to giving shows might have worry about how their favorite tools can turn against them; headbangers might start to worry about, well, headbanging. Finding the choices that are right for you and your rave-style should be the first thing you think about.

Below are a few more generalized tips that should help a wide range of ravers.

Other people at raves become more than new friends: they become obstacles.

While ravers are famously friendly, you can’t count on them to be aware of your ailment, especially if it’s not immediately visible. Without knowing it, they can trigger your pain just by doing the things they would normally do without a second thought. A bump or a trip might seem trivial to them, but it could be catastrophic to you. If other people can trigger pain or discomfort, get ready to be on high alert at all times.

While this might sound like I’m sucking all the fun out of raving — we party to escape responsibility, right? — being aware of your surroundings is actually less time consuming then it sounds. All it really does is change your priorities. Instead of totally being focused on the experience, you also have to do periodic check-ups on yourself and the space you’re in.

Imagine you’re a rave parent, but instead of an extended family, you’re just parenting yourself.

Check the area around you every few minutes, make sure there are no dangerous people (too intoxicated, too rowdy, with no remaining sense of personal space), then go back to dancing. If you feel like the location is getting too crowded or someone stumbles in who could put your health in jeopardy, move, lean out of the way, or re-adjust.

Get ready to make your night more flexible.

We can’t prepare ourselves for every possible trigger. 100,000 people mean that there are 100,000 new, unexpected ways for your ailment to crop up. This means you need to be ready to get flexible and to adapt to what the rave might throw at you.

The best way you can handle this is by getting a good lay of the land. Know where the medical tents are; find a chill spot to hang if things get rough; memorize the location of the water stations and the general store. Learn where the problem spots are, where people will rush to when Zedd takes the stage, where things can go from plenty of room to shoulder-to-shoulder in an instant. Study the exits for each stage, and plan safe routes around the festival that you can take when you need to get away, fast.

In the moment, when something comes up, being able to use this knowledge to get yourself to safety is hugely important.

If you’re not feeling okay, try taking an extended break. Find a relatively uncrowded spot where you can still hear the music and hang out there for an hour. Take things slowly, even when everyone around is going at lightspeed.

Leaving early is also a possibility, and doesn’t have to be negative. Sometimes a short, sweet festival day can be better than a long, painful one. If your symptoms are getting worse and you need to leave, leave. Don’t risk triggering your pain over and over and potentially causing long-term damage. One of the hardest parts of living with something chronic health-wise is learning that your health is more important than your fun. Will staying at the show potentially trigger your health symptoms more? Will it ruin not only this night but the next week, or month? All important things to think about.

Bonus Tip: It’s never fun to be high and have to manage your symptoms!

A wise friend once told me this, and while I know I’ve never listened to him, I implore you to take his words to heart. If you’re new to chronic health conditions and used to attending every event in an altered state, get ready for an unpleasant addition to your high. Dealing with symptoms can be frustrating even when you’re sober, and drugs can just add to the confusion.

Being altered can make it harder to tell truth from fiction when it comes to the severity of what you’re feeling. It becomes easy to blow small things out of proportion and enter an anxiety spiral. The opposite is true as well; how many times have you woken up after a hard night of partying with a broken bone and no memory of how it got that way? Be aware that these are possibilities before you take whatever you want to take.

Sustaining a lifelong injury or disease can feel like the end of the world, but it’s actually far from it.

If something happens to is life-changing, it doesn’t mean life-ending, and there are ways for you to adapt and thrive. Everyone who lives with a chronic health condition has it slightly differently than others and will have their own unique challenges when raving. The tips above should get you started in getting back into the festival scene. Things may never go back to what they once were, but that doesn’t mean you have to compromise on doing what you love!