Bassnectar’s Be Interactive Blended Activism, Music, & Community Into One 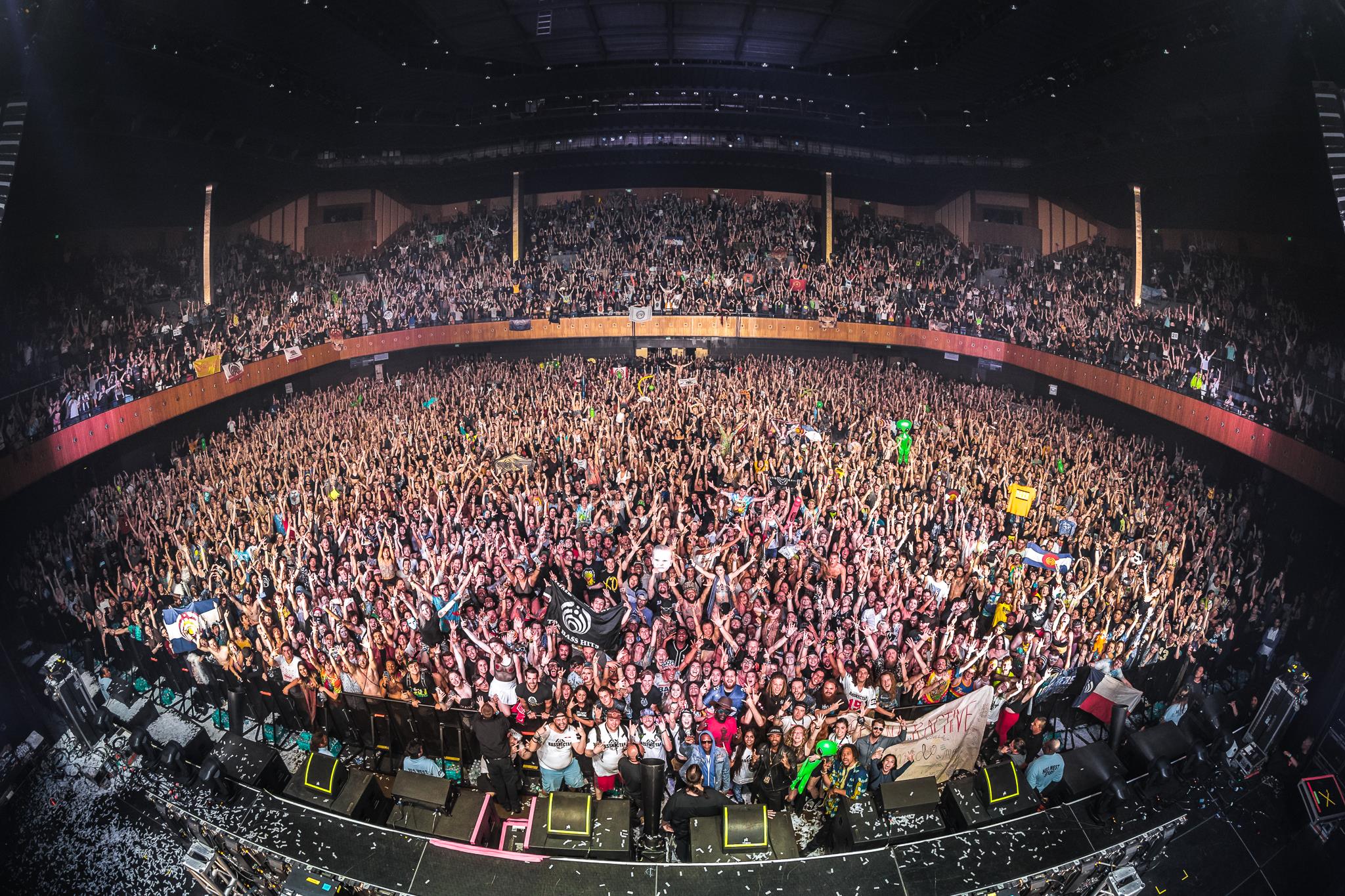 Bassnectar’s Be Interactive event was a wild and wonderful hometown throw down.

Bassnectar’s one-night event was special for a few reasons – it was a long-awaited return to his hometown of San Francisco, and it was also a fundraiser for his new charity, Be Interactive. The 501C(3) nonprofit is taking a really interesting approach to grassroots social organizing. Rather than dictating an agenda, the organization takes submissions from members of the community a few times a year and gives the winners funding to carry out their campaigns.

The first winner, Rio Tazewell, was announced during the show in San Francisco. He plans to use the $2,000 grant for a project that will incorporate “lyricism, spoken word, and graphic animation” to emphasize the importance of voting in the upcoming elections. Voter organizing is the precursor to any political change, so I thought this was a great way to kick things off. Who can’t get behind political involvement?! The next theme, for which Be Interactive will be accepting applications in November, is education.

Given the night’s charitable focus, my crew thought production might be trimmed down to save money. Oh were we wrong…

Nectar brought a huge PK Sound system that rattled our insides from the first opener. Ninth Child got things heated up early with a heavy set, mixing in some trap beats like Atlantic Haze’s “Obey” and bassy tracks like Eastghost’s “Twenty Second Century”. Her original tracks varied from dark and trance-y to bright and upbeat, but all blended in nicely and featured her own vocals. Needless to say, she got at least one new fan this night and probably many more.

Dead Prez was a highly anticipated opener, but I don’t think anyone was expecting the degree to which the crowd erupted when those two got on stage.

They brought an intense energy that got every basshead moving, and even more mellow tracks like “These Are The Times” took on new life with their on-stage presence. I’ll admit I was confused as to why they didn’t play “Hip Hop”, but more on that later. While we’re on the topic of high-energy hip-hop acts, I also have to mention Xiuhtezcatl. He was more animated on-stage than any other act, and his passion really came through in his performance and his lyrics. As a highly politically active artist, particularly on environmental issues, he was definitely a good fit for the event theme as well.

Bassnectar’s set was exceptionally well-rounded and had something to offer every fan, from OG to new.

The hip-hop influence was obvious from the start, with his heavy-hitting opening beat weaved in with lyrics from “Underground”. The influence became more of a theme when he played “Get Right Witcha” by Migos and then closed the show with an awesome performance of the track we were all expecting Dead Prez to play during their set – “Hip Hop”. I breathed a sigh of relief when they finally walked back on stage, and I couldn’t have asked for a better end to the show.

As expected, there was plenty of heavy-hitting bass throughout the set. One highlight for me was when he mixed in the lyrics to Travis Scott’s “Antidote” with one of my favorite mind-numbingly heavy, slow bass tracks, Moody Good’s remix of “Fall in Love” by Slum Village. Two more elusive heavy tracks that I was particularly excited to hear were “Shirazu” by Le Lion & Bundat, and “Elephant Party” by illanthropy. But there were also a number of emotional downtempo tracks that brought focus to some of the social issues that the Be Interactive community is raising funds to address. 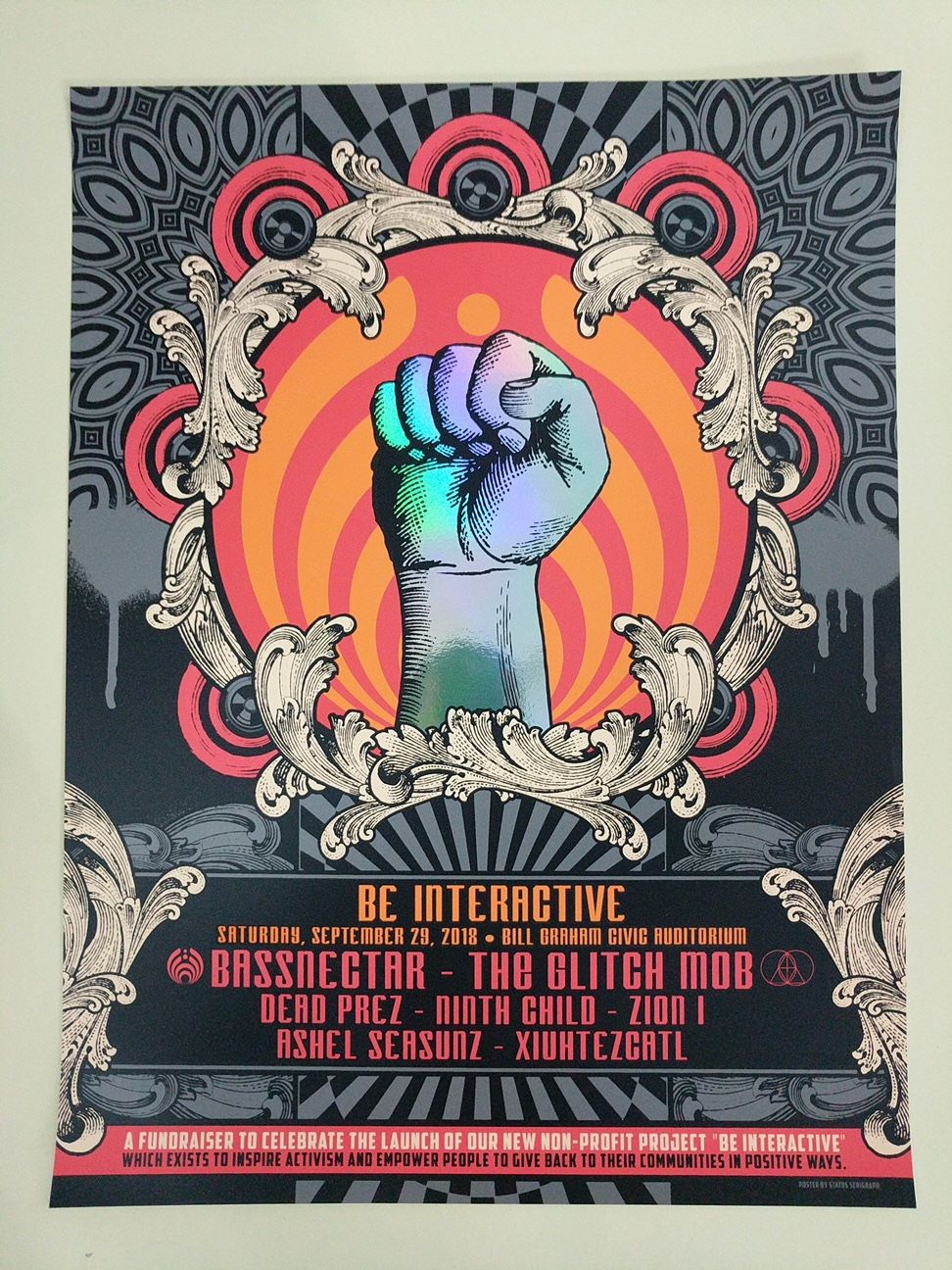 The political messages of the set were polished, positive, and non-partisan, which I think everyone appreciated.

Bassnectar first put up images of Native Americans dancing in front of a vast landscape, to the tune of DJ Shub’s “Indomitable”. The words “this is America” rang in the background, from Childish Gambino’s song of the same name, and seemed to emphasize the importance of respecting both native people and the land we live on. Then he blasted Martin Luther King Jr.’s quote about establishing bases of “genuine concern and understanding” rather than military bases, as well as his statement that “all life is interrelated.”

Be Interactive strongly emphasized political activism and getting involved in a time when it’s most important.

Virtually every issue has reasonable people on both sides and it’s difficult to advocate for social change without alienating people. In the end, I think the Bassnectar team and Be Interactive did a great job of focusing on compassion and general involvement rather than divisive issues. I would argue that voter education and participation are more important than any other issues today, given that they touch all others, so I’m really glad that this is the launching pad for Be Interactive. With a continued thoughtful presentation of issues, I think this initiative can help bassheads realize that they have more in common than not, and become a powerful driving force for youth involvement in our democracy.

Connect with Be Interactive on Social Media: