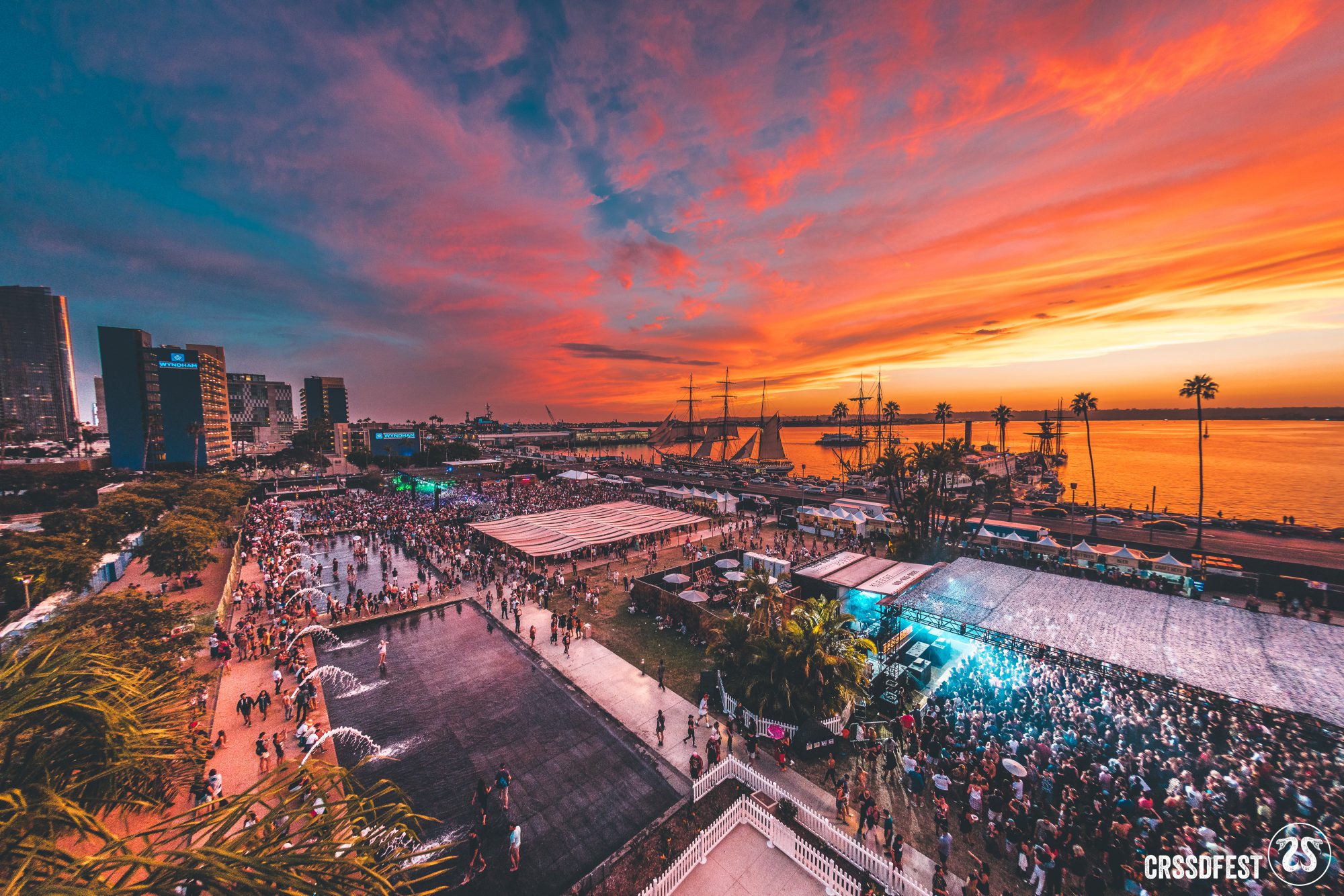 This is not just another event review but a critical look at CRSSD Festival Fall’s faults paired with some comments on the artist sets.

Another semi-annual edition of CRSSD Festival is in the books, and another chance to tell you how amazing the experience was. I’m flipping that script over; because you already know that story.  This time I will write a different tale about CRSSD Festival Fall.

There’s little doubt that CRSSD Festival Fall was a success for much of the attending mass over the weekend, despite the oppressive heat that rolled in from the tropics (thanks, Hurricane Rosa). The talent catered its sonic dishes to the crowd for a solid way to spend the weekend; amounting to good music and good times with awesome friends. That said, the festival was not without its issues, so let’s intertwine the commentary and see what can help the festival and the crowd be even more amazing next time around.

Now if all you want to check out are my thoughts on the sets from both days, just give this article a quick scroll down to the heading “I came for the music Matt! Who rocked the festival bro?” You’ll find some quips about each artist I heard during my time at the festival on both days. There’s a mix of mostly DJs tossed into the fray, so if you’re hoping for some comments on the live stage, I’ll preamble with this: the sound was really off at the Ocean View live stage and I just couldn’t see myself spending much time there because of it.

A tale of two fashions driving a lack of identity.

If anything, CRSSD Festival is falling towards a bit of an identity crisis in my opinion.  Sure, the House X Techno thing remains their musical identity but the way the crowd plays into that motif seems lost. It has nothing to do with the location which remains a great venue for the three-stage event, but it is the attendees, who are a mishmash of styles.

Blending scene cultures of the Desert Hearts style with the beach vibe of San Diego, then tossing in the trendy hipster look, and sprinkle the dark techno fans around… well you’ve got something that no one really understands. It is amazing that all these styles can commingle at one event and enjoy the vibe for certain. Where other festivals thrive on this chaos of style, CRSSD Festival seems to be at odds with each set individually from the perspective of atmosphere.

Aspects such as the banning of rave attire at the festival play into this as well; supplant the wild and wacky with the matured but haphazard. It just all seems slightly off-kilter – slightly out of sync with itself.  I’m not sure what the fix is though, but it just took me out of the experience this time.  Maybe it was the heat?!

I had a conversation about this as well with some friends: An item of note for the fashion trendy and looking to the next year’s trends – odd shape sunglasses seem to be the new “in vogue” accessory.  I couldn’t count the different styles I saw.  From the triple lens design covering the “third eye” location to super narrow and pointed tips well off the sides of the head.  I’ll take this any day over the shutter/slated shades from a few years ago!  These shades were all combined with the presence of many fans to help beat the heat, another accessory of 2018 that has appeared prominently.

The lost art of programming is killing me!

This is a two-fold issue, so let me focus on one aspect before I discuss the second. This particular CRSSD Festival felt like one of the safest in terms of sets I have heard since the first time the festival took place. There are two reasons for it in my opinion.

One is simple – the programming of acts led to little variation, little challenge, and lacked creative focus, especially on day one. I had friends complain, “Well, it’s techno and techno and techno right now between the three stages and they all sounds the same.” To be honest, that sentiment was not inaccurate at multiple points throughout the festival. To cater to each stages identity, you need variety CRSSD, and even if I enjoyed the sound, I know not everyone did.  That’s a bummer and you have done better in the past.

The second issue is more driven by the talent. Aside from few individual sets, much of what I heard from DJs was very safe. I don’t know if DJs decided to collectively lack creativity in their sets because of the heat, or if it was just an off day for a bunch of folks throughout the weekend, but I honestly can count the number of “wow” moments where I truly got lost in the music on one hand. Sure, I kept moving and grooving to the beat in the heat, but my breath was rarely taken away.  You’ll see my thoughts on who rocked the house at the end of this piece.

Lastly, and this is a simple request, please work on balancing out the talent between the two days. Too many people complained to me of having large blocks where there was a lack of anyone who interested them, and a simple approach to fixing this issue is just to make sure diverse sounds populate both days.  I even tweeted on Sunday that four of my six picks were playing on one day. You can split that a bit more evenly team!

The economic division of attendee and their wallet – oh prices!

So, I’ve documented the issue in prior reviews, but the price to options at the festival continue to feel more stifling each iteration. Beer and wine and alcohol options were aplenty, but options under $13 a drink were few and far between. I’ve come to expect it as a regular local, but man, Stella was the closest drink I could find at $11 and that was basically the only option at that price.

In the same vein, food options were not inexpensive at all!

So… about food… when a festival starts midday and goes beyond nightfall people will be hungry. When your options include burritos, Carne Asada fries, Korean BBQ, chicken tenders, corn dogs, or the more exclusive sushi, pizza slices, and lobster rolls from local San Diego businesses, yet they all average at around $12 minimum, there is a problem.

This wasn’t as apparent last edition – example: what happened to the dumpling guys were I could get 8 for $8? What happened guys? Help a brother out and stop raising the prices to levels that just break the bank!

The Musical Revolution of America is maturing!

This one is a simple continued observation. CRSSD Festival was a ground-breaking experience when it first debuted. Today, the blending of specialized experienced in techno, tech house, and house music feels almost normal with brands like Insomniac’s Factory 93 and the Ultra Resistance heralding a similar call to CRSSD.

Clearly the American masses have left the world of big room for more diverse shores; that’s a good thing. That’s not a slight at big room either – it still has a place as fun party music – but it shows a willingness in America to grow with the music just as Europe did decades ago.

The ubiquity of electronic music to the growing base of adult fans is changing the landscape for America. Where it goes, who knows, but hopefully it continues to offer diverse passion and more outlets with open arms going forward, launching careers into a new fold as talent rises in all genres.

I came for the music Matt! Who rocked the festival bro?

Okay, checkmate time. Below are my thoughts wrapped up in a few quips on each of the artists I saw over the two days of festival fun.  For what it is worth – the sound at The Palms and City Steps was great! The addition of the small stacks at the top of the stage trussing really filled out the sound and presented it much cleaner than past editions.  The same was not true for the Ocean View Live stage for the short time I visited it.

CRSSD Festival Fall was good but just missed on being an amazing experience.

There’s not much more I can say about CRSSD Festival Fall 2018.  The lineup was solid throughout the festival, the after parties gave fans something to rock out to if they were not at the grounds themselves, and the summertime sun struck back with a vengeance for the weekend.

With that in mind, the festival still has some areas to improve on, and I hope that they continue to make changes for the future.  The experience will never be perfect – no one festival can be – but it was still a fun jaunt by the San Diego Bay.  Will they improve when the next edition CRSSD Festival Spring rolls out?  Only time will tell!